The Older I Get, The More I Like Passover


by Elizabeth Zelvin
The eight days of Passover begin at sundown on Wednesday, during the same week as Easter this year and four weeks since the World Health Organization (WHO) pronounced the coronavirus crisis a pandemic.

Passover is one of the few rituals my New York secular Jewish family observed. As I've aged, more and more layers have accreted to my understanding of the holiday and its observance. 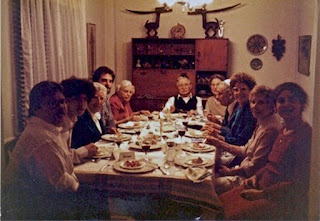 When I was a kid, Passover was all about family. My father read the Haggadah in Hebrew at the Seder, the feast celebrating the Exodus of the Jews from Egypt, and knew all the traditional songs. My mother made the pot roast. I still use her recipe and the thick Wagner Ware pot that by divine alchemy produces gravy without any water at all. (The secret is in the onions, but you need the magic pot.) All the aunts and uncles and cousins on both sides gathered at my parents' table.

My 1978 poem, "Passover," describes a Seder that took place at my parents' house when I was in my thirties but is imbued with nostalgia for those childhood Seders.


my father revels in his role of patriarch
in velvet skullcap and white turtleneck
he looks, by some irony, like the Pope:
He works for one of our boys, says my father

he is telling it for all of us
the only grandchild
Do I have to listen to the boring part?
my mother, the proud Hungarian
with her doctorate and law degree
for whom even the prayer over the candles
—women’s work—remains a mystery
for me, who never went to synagogue
who never suffered as a Jew
for my Irish lover, here for the first time
to whom I am serving up my childhood
on the Pesach plates
for Aunt Hilda, who married out
and Uncle Bud, who was my friend who isn’t Jewish
thirty years ago

at 79 my father has forgotten stories
muffs the accent, sometimes the punchline
no longer knows the name of every lawyer in New York
but tonight he is clear as wine, fresh as a photograph
confident and plump as the turkey itself
awaiting its turn in the kitchen
tonight he is the raconteur I remember
as cherished and familiar as the books, the cloth, the china
the Hebrew words I cannot understand
the melody I miss at anybody else’s Seder
that my father and Aunt Anna with her trained soprano
learned in Hebrew school as children
all I have traveled back, back to see and hear

measuring his audience
expanding in the warm room like love
my father pours the wine
skips the prosy rabbis arguing
and tells instead the illustrated Bible story:
Moses in the bulrushes, cruel Pharaoh, the Red Sea parting
Let my people go
or I’ll give you what for
says my father

"Passover" first appeared in Elizabeth Zelvin, I Am the Daughter (1981) New Rivers

When it fell to me to keep the tradition going, progressive secular Jews were rewriting the Haggadah to suit the changing times and current political and cultural ideas. For a number of years, we read a passage from something called the Egalitarian Haggadah that couched the story in the language of labor and liberation movements. To tell the truth, I thought it was hilarious.


"Pharaoh was... unwilling to give up his power over the slaves. ... It was not enough to present reasonable demands. ... The oppressor had to be brought to his knees. ...[But Pharaoh finally] told the Jews to leave. Our ancestors ...collected back wages in goods from the Egyptians for 400 years of unpaid labor. Then they mobilized according to plan and marched out."
— An Egalitarian Hagada, © Aviva Cantor 1982 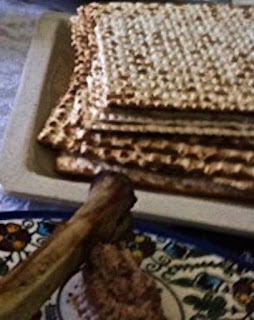 A couple of decades later, a lot of Jewish women started putting an orange on the Seder plate along with the traditional ritual lamb shank, roasted egg, bitter herbs, spring greens, and charoseth. The orange represents marginalized Jews, rejecting sexism and homophobia in Jewish tradition. I put an orange on my Seder plate every year. And we discuss it, so my granddaughters will understand.

Now my family is a multicultural family. It includes my Irish husband (forty-plus years since the poem), my Filipino daughter-in-law, my gorgeous granddaughters (half Jewish, raised Catholic), my cousin the son of Aunt Hilda and Uncle Bud, and said cousin's two kids (25% Jewish). My son and I have the only 100% Jewish DNA at the table. When friends are invited to join us, their origins tend to be an ethnic, religious, and national potpourri.

When the girls were very little, with the attention span of fleas, I wrote a very short Haggadah they could relate to.


"Once upon a time in Egypt, there was a king called Pharaoh who was very mean to the Jews... The princess found the baby in the basket and decided to adopt him. But Moses's mother got a job in the palace as a nanny, so she got to take care of her baby Moses too."

On one level, the story of Moses is a classic folk tale.


"Moses kept trying to get Pharaoh to let the Jews go home. He kept saying, 'Let my people go!' But Pharaoh kept saying, 'No!' Bad things happened to the Egyptians, like thousands of frogs that suddenly appeared and hopped around all over them. And Moses said, 'Now will you let my people go?' And Pharaoh said, 'No!'"

This year, we're having a virtual Seder via Zoom. I've written an entirely different flash Seder for my granddaughters, now 16 and 13. 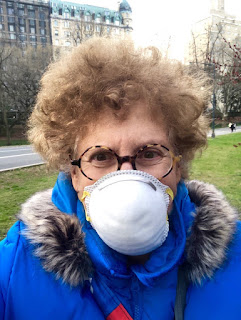 "This year we are experiencing a plague of our own, the coronavirus. Like the plagues that God visited on the Egyptians, it came without warning, it has spread rapidly, and it has fallen on many innocent people. It has affected not just one group or nation, but the whole world. We don't believe that the coronavirus is a punishment from God. But there are certainly selfish and greedy people in power who have made it harder to deal with this plague and heal the world."

We'll get back to that "healing the world."

In our house, the four sons in the traditional Haggadah have long since become four children. Traditionally, one child is wise, one rude, one "simple," and one doesn't even know to ask a question.


"We don't have any children who are rude or not very smart or no good at asking questions, so let's take a couple of minutes to ask our wise children what they think about three things: (1) God visiting plagues on the Egyptians so the Jews could get away; (2) the connection, if there is one, between the coronavirus and the kind of leadership we have right now in America; and (3) if your personal experience of living with our own "plague" has made you think or feel differently about the story of the Exodus."

My Jewish historical series, the Mendoza Family Saga, started with the Jews' expulsion from Spain on the day Columbus set sail. But until I started doing research, I had never heard of the lost children of São Tomé, two thousand Jewish children who were abducted by the King of Portugal in 1493 and sent into slavery on a pestilential island off the coast of West Africa. Their story became a major plot line in my novel Journey of Strangers. In general, the research I've done for the Mendoza books and stories has heightened my awareness of why and what we remember every year and can't afford to forget.

The concept of tikkun olam, repairing or healing the world, is fundamental to Jewish ethics. We are obligated to have a social conscience. The Seder ritual of dipping a finger in a cup of wine as we recite the plagues, one drop for each plague, symbolizes that our cup of happiness can never be completely full as long as one person still suffers, even our worst enemy.

So it's not surprising, perhaps, that the traditional ending of the Seder bothered me. After the meal, after the songs, after the final glass of wine and the final blessing, everyone is supposed to shout joyously, "Next year in Jerusalem!" L'shana haba'ah b'Yerushalayim.

In terms of modern global politics, I found this embarrassing. To the ancient Hebrews, Jerusalem was the Promised Land, the homeland that God had set aside for them. After leaving Egypt, they wandered in the desert for forty years until they were deemed worthy of it. Then they had no problem moving in. But—a big "but," in my opinion—another tribe, the Canaanites, already lived there. Oops.

So here it is, thousands of years later, and everyone still wants Jerusalem. And what a lot of trouble it still causes the world! I didn't think I had the right to throw out the punch line of the whole Haggadah. But I wanted to make "Next year in Jerusalem" mean something more inclusive than, "Let's throw the other fellows out."

So I wrote this song, with which my family now ends the Seder every year.


Prayer (Next Year in Jerusalem)
From album Outrageous Older Woman 2012 ℗ & © Liz Zelvin
Elizabeth Zelvin is the author of the Bruce Kohler Mysteries and the Mendoza Family Saga and editor of the anthologies Me Too Short Stories and Where Crime Never Sleeps. Her story "Reunion" will appear in the May/June issue of Alfred Hitchcock's Mystery Magazine and a story in Jewish Noir 2 in September. Three of Liz's stories have just been accepted for future issues of Black Cat Mystery Magazine.
Posted by Elizabeth Zelvin at 00:01