For the Love of Malice

In the spring of 2001, I was taking my first mystery-writing workshop. My instructor, author Noreen Wald, told us—all eight of us, I believe—that we had to go to Malice Domestic. I didn't even really understand what Malice Domestic was, but I knew I wanted to write mysteries, so if Noreen said I had to go, I had to go.

That was the beginning of my love affair with mystery conventions. Over the years I've been to Sleuthfest once and to Bouchercon nine times, but Malice is the convention I never miss. It's a place where I feel at home, among friends who love traditional mysteries, many of whom I now consider family. This year was to be my twentieth Malice, and not getting ready to drive to Bethesda on Thursday for the start of the convention just feels wrong. I'll miss the dinners and the panels—as the former program chair, I always have to plug the panels—and I'll especially miss the hugs. Remember when we all weren't afraid to get within six feet of one another, nonetheless to hug? 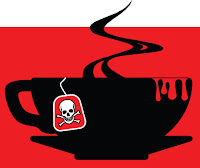 But just because Malice is canceled this year doesn't mean that we can't still celebrate the traditional mystery this week and the people who write and read them. The Agatha Award voting will be held later this week (links to read the nominated short stories are below), and the winners will be announced in a live stream Saturday night. The Malice board also will be announcing next year's honorees (who will be sharing the stage with the wonderful people who were supposed to be honored this year, in what I understand might be a supersized Malice), as well as the theme for the anthology to be published in the spring of 2021. I believe the Agatha board of directors will be sending out more information about all of that very soon.

And that brings me back to getting into the Malice spirit. I was talking last week with my friend and fellow SleuthSayer Art Taylor about it and how we could use my blog post today to do it. Art wisely suggested that since one of the great things about Malice is it allows readers to learn about new writers, it would be wonderful to have this year's Agatha short story finalists tell you, our SleuthSayers readers, about some great up-and-coming short story authors. I shared the idea with the rest of our fellow finalists, and they all were in faster than you can read flash fiction.

So, without any further ado, here are five short story writers whom we five nominees admire. I hope you'll check out their work. 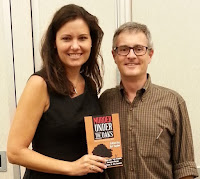 I admired Kristin Kisska's fiction before I knew that she was the one who wrote it—literally, since her name didn't accompany that first story. "The Sevens" was a blind submission for the 2015 Bouchercon anthology, Murder Under the Oaks, which I edited. Set at the University of Virginia in 1905, "The Sevens" stood out for its intriguing plot and its rich sense of both place and historical detail. It became Kris's first published story, and as editor, I was thrilled to introduce this tremendous talent to the mystery world. Since then, Kris has published short stories in several collections, including two Malice Domestic anthologies—Mystery Most Geographical and Mystery Most Edible—and Deadly Southern Charm from the Central Virginia Chapter of Sisters of Sisters in Crime. Checking her website as I write this, I found a more recent story I'd missed: "Prelude" in Legends Reborn. Score! And even better news: Kris just signed with a literary agent for her first novel. Save me a place in line for this next debut—book-length this time! 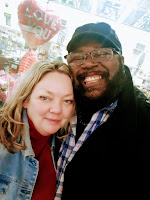 I first met Shawn (S.A.) Cosby when I was invited to read at a Noir at the Bar event three years ago in Richmond, Virginia. All of the stories that night were good, but Shawn's was uniquely memorable—he writes gritty southern noir woven through with glittering threads of humor. Since that night in Richmond, Shawn and I have appeared together at N@TB events many times, and have downed more than a few cocktails together at Bouchercon in St. Pete and Dallas, where he won the 2019 Anthony Award in the short story category. He's one of the most upbeat and nicest guys in the mystery world, and each new story he writes brings that unique flair that is his alone. Shawn's newest story is "The King's Gambit," which will appear in Ellery Queen's Mystery Magazine in June, and his novel Blacktop Wasteland will be published in July by Flatiron Books. It's described as Ocean's Eleven meets Drive with a southern noir twist, and it's recently been optioned for film. 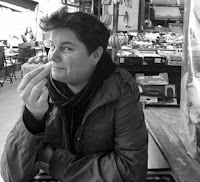 I had the good fortune to meet Amy Drayer at the Colorado Gold conference, and she immediately impressed me with her smart, engaging perspectives on writing in general and mystery in particular. After she joined our Sisters in Crime chapter, I read her fantastic work and was even more impressed. Amy's writing is compelling, witty, eloquent, and thought-provoking. Her published short stories include "The Clearing" in False Faces: Twenty Stories About the Masks We Wear and "Honorable Men" in Shades of Pride: LGBTQAI2+ Anthology. "Schrodinger's Mouse" is forthcoming in Wild (Rocky Mountain Fiction Writers). She has written short fiction in genres ranging from horror to fabulism, literary flash to pop fiction. The first book in her wonderful Makah Island Mystery series, Revelation, also came out in March. 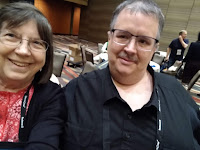 Joseph S. Walker came to my attention when he submitted a story, "Awaiting the Hour," for my own 2017 eclipse-themed anthology, Day of the Dark. The story was stunningly good, and I was amazed I'd never heard of Mr. Walker before. I've certainly heard of him since. I gave a couple of stories from that publication to Otto Penzler, and he mentioned Joseph's in his annual publication honoring the best of mystery short stories. Joseph went on to win the Bill Crider Prize at Bouchercon 2019 in Dallas, then the Al Blanchard Award at New England Crime Bake. His latest published fiction is "Etta at the End of the World" in the just published May/June issue of Alfred Hitchcock's Mystery Magazine.

It seems appropriate for me to end this column talking about Stacy Woodson because I met her at Malice Domestic in 2017, when I served as a mentor/guide to Stacy and fellow Malice first-timer Alison McMahan. Since then Stacy has become one of my closest friends, not only because of our shared love of Mexican food (Uncle Julio's forever!) but because she is as passionate about short stories as I am. Everything she writes showcases not only her raw talent but also her heart. I was honored to edit her first published story, "Duty, Honor, Hammett," before she submitted it to Ellery Queen's Mystery Magazine. It not only ran in the magazine's Department of First Stories in 2018, but it went on to win the magazine's annual Readers Award, only the second time in history an author's first published story took the top honor. Stacy has since gone on to be named a top-ten finalist for last year's Bill Crider Prize at Bouchercon, and she's placed a number of stories in Mystery Weekly, Woman's World, and EQMM, where her story "Mary Poppins Didn't Have Tattoos" will appear in the July/August issue. Stacy's most recently published story is "River" in the anthology The Beat of Black Wings: Crime Fiction Inspired by the Songs of Joni Mitchell. "River," like so many of Stacy's stories, gives a window into her experience as a US Army veteran. Given Stacy's insatiable desire to learn and grow as a writer, I have no doubt you'll be reading much more from—and about—her in the future.

I hope you've enjoyed learning about these newcomers to the crime short-story field, who are already wowing readers. Please consider checking out their work. There are so many independent bookstores that could benefit from your business, especially during this pandemic. The stores might be closed, but many are still mailing books out.

And before we go, to those of you who were registered to attend Malice Domestic this year and who either transferred your registration to next year or donated your registration payment to the convention, it's nearly time to vote for the Agatha Awards. The electronic voting is going to begin soon (tomorrow or Thursday, I expect). It's not too late to read the short stories that are nominated for the Agatha. They are:

Just click on the titles. Happy reading, and I hope to see all of you next year at Malice!