And two more: Sleeping Beauties (Stephen King and Owen King) and Strange Weather (Joe Hill). It's those I want to focus on, today.

Owen King is of course Stephen's son, and so is Joe Hill. Before Sleeping Beauties, I had not read anything written or co-written by Owen before, but I own every novel, novella, short story, and nonfiction book his father has done, and every book by Joe Hill as well: The Fireman, NOS4A2, Horns, 20th-Century Ghosts, and Heart-Shaped Box. (I was especially impressed by The Fireman.) 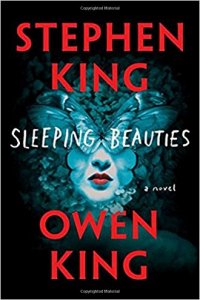 These two latest books were as well written, I thought, as any of the King products in a long time. Sleeping Beauties is a novel, and a long one--720 pages--and features more than 70 named characters. It's otherworldly, of course, and is set in an Appalachian town (most likely in West Virginia, although it never says for sure) and its nearby women's prison. The premise is fascinating: something is causing all the women in town to go to sleep, and when they go to sleep they don't wake up. The villain isn't really the sleeping-sickness; the villains are the men--at least some of them--and all kinds of timely themes are explored here.

One more reason you can't go wrong with this book: Stephen King writes good prison fiction. His novel The Green Mile and novella Rita Hayworth and Shawshank Redemption (from Different Seasons) are among his best works. And I should also mention that I can't see much difference in the style of writing between King's other books and this collaboration with his son. I truly enjoyed it. 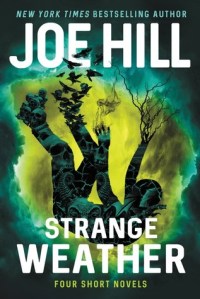 The Joe Hill book is Strange Weather, a collection of four novellas that reminded me a bit of Different Seasons, from 35 years ago. In this case the common theme is the weather: violent electrical storms, wind-fueled wildfires, innocent-looking but sinister cloud formations, and downpours of nails and needles.

A quick overview: In the first of the four novellas, Snapshot, an overweight and outcast teenager is threatened by a tattooed killer with a supernatural Polaroid camera; Loaded is a dark story of gun mania and depression and violence in a small town; Aloft (the best of the four, I thought) features a first-time skydiver who falls into a cloud that turns out not to be a cloud at all; and Rain shows us what can happen when thunderstorms produce deadly falling hardware instead of water. Like Sleeping Beauties, these four tales manage to tackle a number of social concerns: racial prejudice, police brutality, gun control, bullying, LGBT issues, etc., etc.

I won't say more. Part of the fun of both these books, and all five of these adventures, is the constant surprises they offer to the reader. But I will say that I'm pleased to find that both of SK's sons seem to have inherited a rare gift. The literary apple didn't fall far from the tree.

Are any of you familiar with the work of either Joe Hill or Owen King--or of their mother Tabitha? If so, what do you think? And how many of you are fans of their father's fiction? At my own booksignings, the comments I receive about Stephen King are always either hot or cold, never lukewarm. It's either I don't read Stephen King at all or I absolutely love his books. I suspect that many of the naysayers have never bothered to read more than a few of his early works, and don't realize his range or his talent.

I've met the elder King only once, at the Edgars (he won, I lost), and I was so awestruck I did little more than shake his hand and babble. I think he's one of the best storytellers of our age, and as long as he keeps writing, I'll keep buying.

That goes for his sons as well.

I haven't read a lot of King's more recent novels (by which I mean many, many year) but I loved so many of his early novels, and I admire his short fiction too. I also read (and reviewed for the Washington Post) Joe Hill's Heart-Shaped Box, which I thought was fine work.

The elder King was a guest of honor at the Fall for the Book festival here at George Mason a few years ago, and I was his escort for the weekend--offering a glimpse into the life of a real celebrity (his fans can be a little, um, overenthusiastic at times (read "stalkerish")). King himself, though, was completely down to earth and one of the nicest authors I've worked with in a situation like that. He asked about classes I was teaching, my students and their work, and he made suggestions for books I might want to read or even consider for my syllabi--and he talked enthusiastically about Mason's basketball team, which he followed, said he wanted a t-shirt and was thrilled when we got one for him. A pleasure to deal with throughout his visit with us.

I'm not a fan of King's fiction, except for November 1963, but his book on writing is excellent and one of the best accounts of becoming a writer I've ever read.

Art, I'm sure you enjoyed that experience. I too found him to be friendly and approachable.

Janice, almost every author I know says On Writing has been helpful--I love that book, and King's 11/22/63 also. I hope you'll try some of his more recent short stories--you might like those--and a few other non-Kingly books like Misery and The Dead Zone. (Unappealing titles but good novels.)

I've read several of the elder King's books, but nowhere near all of them. I've liked several of his newer works, especially Mr. Mercedes, which is more a crime/suspense novel than horror. The later books in that trilogy drifted more toward the horror aspect, but they were also quite good.

I've never read any of Owen's works, but I've read most of Joe Hill's books and thought the stories in 20th Century Ghost displayed an amazing versatility. I haven't read The Fireman yet, but it's on my list. And I'll definitely check out Sleeping Beauties, John.
Thanks for the recommendation.

Other books of the year, has anyone else read Lindsay Faye's Jane Steele or The Whole Art of Detection? I just discovered her work last spring and have devoured all of it. Certainly The Force (I've been a Winslow fan for years). I'm a slow reader, so I'm constantly struggling to catch up. For nonfiction, Ibram X. Kendi's Stamped From the Beginning is a very readable history of racism in America.

You're right, Steve, Mr. Mercedes was more of a crime novel--it won the Edgar for Best Mystery--while the second and third books in that trilogy were otherworldly. Another that you might like, of his recent books, is Gwendy's Button Box which is weird and certainly paranormal but interesting.

I was pretty surprised to find that I enjoy Joe Hill's work as much as I do, and I plan to read more of Owen's, now.

Thanks for the recommendations!

I loved King's book "On Writing". I quit reading King's books early because (to be honest), I already have an extremely vivid dream life and I don't need any one else's nightmares to add to it. Perhaps I'll try him again.

I do understand, Eve. I probably read too much creepy-crawly fiction. A few of King's, though, rate pretty low on the nightmare scale: Blockade Billy, The Colorado Kid, Joyland, etc. And a couple of books--The Eyes of the Dragon, The Wind Through the Keyhole--are almost fairy-talish. God help me, I liked all of 'em.

My favorite novels of his are probably It, The Stand, The Dead Zone, and 11/22/63. And I think the best movie adaptations have been The Shawshank Redemption, Stand By Me, Misery, Hearts in Atlantis, The Night Flier, The Dead Zone, The Green Mile, Silver Bullet, and The Mist. A couple more that were pretty good, recently: Gerald's Game and 1922.


I've been a King fan for decades. But on the more general topic of good reads in 2017, my absolute favorite was Magpie Murders by Anthony Horowitz. It's the finest homage to Golden Age mysteries that I have ever read. I recommend it highly, and also recommend reading it without knowing anything about the book in advance.