I am thrilled to bits to have the cover story in the January/February issue of Alfred Hitchcock's Mystery Magazine.  I also have a piece up on Trace Evidence, the AHMM  blog site, about the Orphan Train movement, which is the fact  behind my fiction. Today I want to discuss how I found out about it.

It goes back to the 1970s, when my future wife and I attended our first-ever folk  festival.  This was in Middletown, New Jersey and it had more than  a dozen performers, none of whom we had ever heard of.  (Honestly, I think the only folksingers we could have named back then were Dylan, Baez, Seeger, and Guthrie - Arlo, not Woody).

At one point Marlene Levine, the MC, said, "We had this man  here a few years ago and we think we've recovered enough to have him back.  Here he is, a legend in  his own mind, U. Utah Phillips, the Golden Voice of the Great Southwest!" 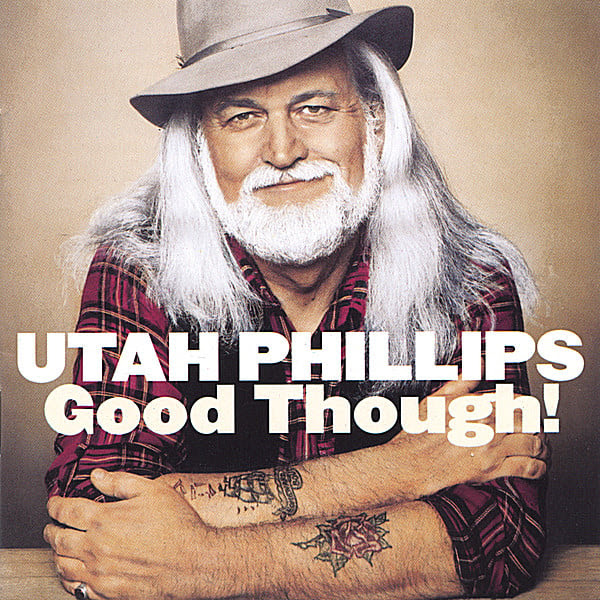 Out came an old man (ha, younger than I am now) with a gray ponytail under a cowboy hat.  When he left the stage twenty minutes later my wife and I were committed lifelong folkies.

Utah Phillips was a singer-songwriter, raconteur  and performer.  He shared a body with Bruce Phillips, who was a veteran, a pacifist, an anarchist, a Wobblie, and a railroad nut.

One day, a decade after I first heard him, Phillips was touring in the midwest.  He came back to his hotel and saw a sign that read ORPHAN TRAIN REUNION.  Considering what I told you about him, you should realize that Bruce could no more walk past that sign than he could have flapped his arms and flown past it.

Of course he went in and asked "What's an Orphan Train and why a Reunion?"  The answer led him to writing one of his best songs.  I can't find a recording on Youtube of Utah performing it but there are several good covers and here is one.  (Hi, Jim Portillo!)

That song introduced me to the Orphan Train.  It led me to read a couple of books on the subject and that inspired me to write a song of my own.  Mine is based on the true story of the Woodruffe family of Trenton, Missouri.  I rearranged some of the facts but the main events really happened to Phyllis Weir, later Phyllis Woodruffe.


But after writing that song I still wanted to say more about the Orphan Train.  So being the kind of writer I am I asked: Is there a way to write a crime story about this phenomenon?  The result is "Train Tracks."  I hope you like it.
Posted by Robert Lopresti at 00:00

Rob, I hadn’t heard of the orphan train. After reading your post I looked it up. Fascinating story. And congratulations on your AHMM cover story!

Congratulations. I have the issue but have not yet gotten to the stories. Orphan train one will be first on my list.

I liked the story a lot, Rob, both your history here and the story in AHMM, as well as those by the other SS writers. Congratulations.

I love the story, Rob!

Cool story. Got to it late in the day. Frozen water pipe split. Got plumbers working on it now. At least the electricity and gas are OK.

I had some vague knowledge of the Orphan Train, having seen it in a movie or two, but I had no idea of the extent of the movement.

Thanks for all the kind words, folks. There are a ton of interesting stories about the Train, as you can imagine. Lots of lives got turned around for better or worse...

Congratulations Rob on getting that cover! Well-deserved!

Oh, damn, Rob. I wasn't prepared to have my heart wrenched.

Obviously I'm catching up. Congratulations on the cover!

Thanks, Leigh. I recently bought an Allen wrench for special heart-wrenching occasions, so I can set you up either way.

And thanks, Brian, too!