Wandering with a Story

A friend sent me a link to an article in The Atlantic. It's about how writers run. Maybe she was suggesting something. I'm a writer, but I don't run... but then I'm not exactly immobile. I walk; as in long walks for no reason other than the walk itself. So, in a sense, I am a writer who runs, I just do it with, ahem, "considered application." And like the authors mentioned in the Atlantic article (Louisa May Alcott, Joyce Carol Oates, Don DeLillo, et al), the forward propelled movement with no specific goal other than the movement itself is absolutely linked to my writing.

Absolutely is perhaps too strong an adverb. But the relationship is symbiotic. There is simply nothing better after a long day of writing to throwing on a t-shirt and pair of shorts, lacing up a pair of sneakers, and heading out for a brisk stroll. I have a natural circuit around my neighborhood. It's about seven kilometers, features a hill climb, and takes about an hour. Perfect.

First up out the door is the intake of fresh air; great lungfuls of it. And any kind of exercise has to be good after sitting at a desk for several hours. It gets the dopamine flowing. But what it's really about is the plunge back into reality after a day spent ensconced in the imagination. Writing is a form of meditation. It's a concentration that disconnects you from the here and now. You go with your story. You flow with it. You enter its world and your mind "exists" in its space and time.  Walking brings you back.

And brisk walking is a form of meditation itself, although a more rhythmic sort. It's a straightforward repetition of physical action. And it's passive, so you don't need to think at all while you do it. But, of course it is, in that passive state, with the dopamine flowing, the perfect time to think; to ponder, reflect, and consider. And here's where it's symbiotic for me, because I think about the writing I've just been doing.

And I realized sometime ago why the walking + thinking about the day's writing can be so effective: I can't edit. I can't call up the text on a screen in front of me and read it over. I can't move things around: a word dropped here, a sentence rewritten there. 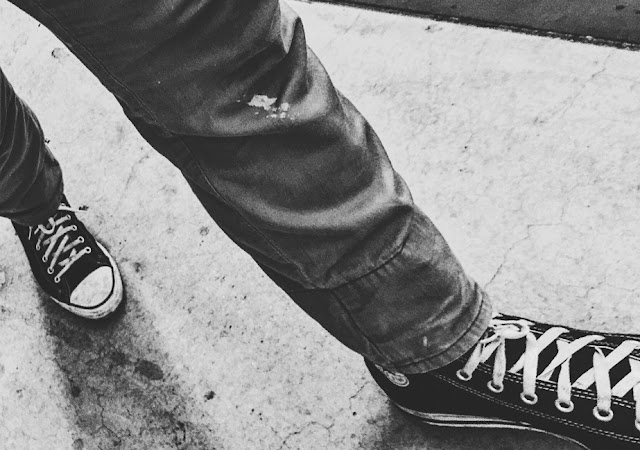 Everything has to be from the memory. And as such, the thinking becomes more analytical in nature. Firstly, questions, e.g., Does the story really work? Are the characters' motivations clear and defined? Is the twist at the end twisty enough? And so on. And then out into the realms of meta-thinking, where, in the meditative state of the walking, the mind wanders in and out of the story, and I'll ponder everything from its word count to the hero's hat size. It's here where the imagination roams free.

And it's here where things can spark.

I wrote a story once about a young boy who enlisted the help of an elderly, retired policeman to look for a missing friend (The Man with One Eye, EQMM, December 2010). While out on a walk during the writing, an idea came out of nowhere to make the old man a retired gangster, instead. The character immediately became more interesting to write and the story was better for it.

Just about every story I've written has had a spark or two like this. Walking invokes a form of lateral thinking, or thinking outside the box (leastways, outside the house), which is completely different to the thinking when sitting at the desk staring at the text on the monitor.

Needless-to-say, I always have a notepad and pencil on standby for when I return home.

Beethoven was keen walker. He favored forests, and he was lucky; in 18th Century Germany there always seemed to be one handy. I don't have the luck of dense foliage to roam about, but it helps that where I live (borderline suburbs/rural) is low density traffic and people, so I encounter little distraction when out. My fellow footpath travelers are dogs, mostly; out taking their humans for walks, and no doubt mulling over their day's work, just like I am. This bone or that bone? Shall I annoy the cat, this evening? Shall I continue work on my memoirs?

Ray Bradbury was another walker. He hated cars and never got a driver license.


"What are you doing out?"
"Walking," said Leonard Mead.
"Walking!"
"Just walking," he said simply, but his face felt cold.
"Walking, just walking, walking?"
"Yes, sir."
"Walking where? For what?"
"Walking for air. Walking to see."

From The Pedestrian
Ray Bradbury, 1951

And, of course, the last thing I would say is that all that walking is kind of healthy. So there it is.

The article at The Atlantic is here: Why Writers Run

www.StephenRoss.net
Photo from www.Pexels.com
Posted by Stephen Ross at 00:00