The Goodfellas Return to South Dakota


by Eve Fisher
South Dakota made it to the national news this week, thanks to Rep. Lynne DiSanto, R-Box Elder, and State Legislature Whip, who posted an image earlier this month on Facebook or some such social media: 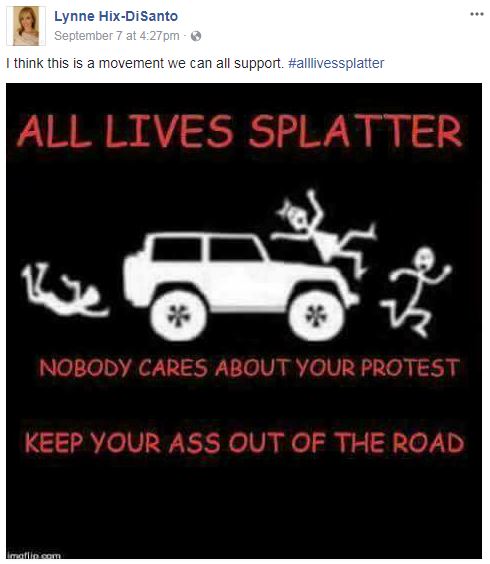 After people called her out on the meme, she took it down and wrote:  “I am sorry if people took offense to it and perceived my message in any way insinuating support or condoning people being hit by cars.  I perceived it differently. I perceived it as encouraging people to stay out of the street.” Yeah, right. That's why she commented:

"I think this is a movement we can all support. #alllivessplatter"

To be fair, as some of us have noted, she's from West River, where there's a wee bit of racism. That's where I was denied a motel room 27 years ago because they thought I looked Native American.

That's where, for 2018, the Native Americans of Tripp, Dewey, Jackson, and Buffalo Counties will be provided only 9 days of the official 46 days allotted for early voting at one satellite center each for the Rosebud, Cheyenne, Pine Ridge, and Crow Creek Reservations, respectively.  Why? you might ask. (Although you may also have already ferreted out the reason.) Because that's all that the county commissioners asked for, according to Secretary of State Shantel Krebs.

NOTE 2:  For those worried about fraudulent voters, I can assure them that each and every person on the reservations was born in this country, and their ancestors have been in the Americas for thousands of years.

And, in answer to the question you may not have asked, Yes, most SD county commissioners are white.

DiSanto did lose her job - real estate - and she was dropped by the group Working Against Violence, Inc., as a speaker from an upcoming event.  But our own South Dakota legislature refused to reprimand her in any way.  (Argus Leader 1 and Argus Leader2)  And no, I'm not surprised.  After all, it was just a couple of weeks ago that the Minnehaha County Republicans sponsored a "Liberty Rally" at the Hilton Garden Inn in downtown Sioux Falls. About 80 people, including five state legislators and two Republican gubernatorial candidates, showed up to listen to a New Zealand writer and filmmaker named Trevor Loudon urge South Dakota to pass laws labeling Muslim advocacy and student organizations as hate groups and block Muslim refugees and immigrants from even entering the state.  (I guess we need to build a wall around South Dakota, too...) Argus Leader 3

But enough about that.  What about money?

Remember Gear Up, the federal program to help give Native American students scholarships? Remember Scott Westerhuis, who apparently embezzled $1.4 million and then, when it was all about to come out, killed himself, his wife, his four children, and set fire to his house and destroyed everything (except for the safe, which is still missing)?  Well, the latest twist is that Legislative Auditor General Marty Guindon has done a new audit, and said that the funds used for the Gear Up grant were all returned, and South Dakota owes the feds nothing.  Huzzah!  (Argus Leader 4). Instead, Mid-Central owes $3.4 million that it stole from 14 central South Dakota public school districts via representatives of those 14 public school districts. Now, South Dakota not only wants the money back, it's suing... wait for it... the school districts! (Argus Leader 5)  Even a former Republican State Senator is appalled by this.

"The burden of ongoing corruption in SD just got real for the taxpayers in Armour, Burke, Colome, Corsica, Ethan, Gregory, Kimball, Mount Vernon, Plankinton, Platte-Geddes, Stickney, Wessington Springs, White Lake, and Wolsey-Wessington School Districts! On June 29th, the “Lead Grant Partner” to MidCentral Education Cooperative (MEC), responsible for the administration, management, and oversight of the GEAR UP grants since 2005, named those schools contracted to MEC for services in its $4.3 Million lawsuit to recoup monies fraudulently misappropriated. The “Lead Grant Partner?” The SD Department of Education (DOE)!...

"U.S. history is replete with political corruption like New York’s Tammany Hall, and the Chicago Daley political machines that robbed taxpayers from within government through cronies protected from prosecution. We are seeing the same subversion of law in South Dakota for protection of cronies, in an ever brazen fashion."  (read the rest of Republican State Senator Stace Nelson's op-ed here at Dakota Free Press)

But that's the big boys.  How can we, as individuals, do our part to participate in gaming the system? So glad you asked.  Meet Tri-Valley school superintendent Mike Lodmel, who figured out a quick way of getting more funding for his school.  He invited all the homeschoolers in the area to attend school on September 29 to receive a free laptop.  Interestingly, September 29th was the day that the state took its official student enrollment count to figure out the district state aid for next year.  Each and every homeschooler that showed up meant $3,000 more for Tri-Valley.  Well, the governor's office heard about this and shut it down. Mr. Lodmel sent letters to all the homeschoolers, withdrawing the offer of a free laptop. He also said that his attorney said the plan didn't break any laws. "Frankly, our district has rescinded the offer because (I feel) moving forward just wouldn't be worth it... I honestly didn't believe this would be 'such a big deal." (Argus Leader 6)

Although it's irrelevant to Mr. Lodmel's funding idea, Mr. Lodmel is also the man who made Tri-Valley the first district in South Dakota to utilize the 2013 school sentinal law, allowing school employees to carry firearms...