In a SleuthSayers post back in July, I talked about how we were moving this summer—a process that still seems never-ending. Yes, we got all the boxes into the new place, and we've made some headway on unpacking, organizing and arranging the contents of those boxes. Yes, we finished cleaning out (slowly) and cleaning up (painfully) the old place and then bringing it successfully to closing (a big sigh of relief). And in addition to the move, we navigated another couple of transitions—most importantly my wife Tara's start at a new job and our son Dashiell's entrance into kindergarten (which I also wrote about at the Washington Independent Review of Books). Much to celebrate in all this, but also still a long way to go—and the dishwasher that died on Monday hasn't helped, I'll admit: one more thing to add to the to-do list.

Still, we're happy with the new place, especially Dash, who calls it a "magic house." There's a corner cabinet in the kitchen with a lazy Susan inside! The timer on the stove plays a little song when the countdown hits zero! And at sunset, the glass in the front door projects tiny patterns, shapes, and rainbows on the wall!

I'll admit: I find that last bit a little magical myself.

Our search for a house seemed quick—we picked this one on our second formal day of looking with an agent—but our plans to move stretch back to even before Dash was born. We'll move to a house with a yard before he starts kindergarten—that was our goal. And we had more than five years to meet that goal—should be easy, right? Just before Dash turned five-and-a-half, we finally kicked into high gear.

When our realtor (shout-out to Dutko-Ragen in Northern Virginia!) asked us what we were looking for in a house, he emphasized that we should talk about things we needed (couldn't do without) and then things we'd love to have (reaching for the stars).

Dash, a car man since he was a baby, judges houses by whether they have a garage, so that was top of his list.

Tara has always loved the idea of a screened-in porch.

And I felt that ideally Tara and I—both being writers—should each have space for an office, hearkening back to that oft-quoted phrase of Virginia Woolf's about a room of one's own. (I recognize, of course, that Woolf's essay is an argument about women's spaces and places in the literary world, but I do believe that writers and artists of either gender benefit from having both mental and physical space in which to indulge their creativity and hone their craft.)

The reasons we snatched up this house as quickly as we could?

Well, Dash got his wish: 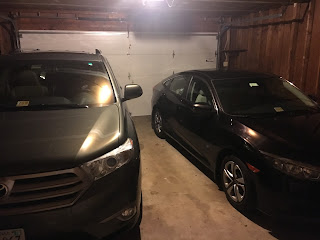 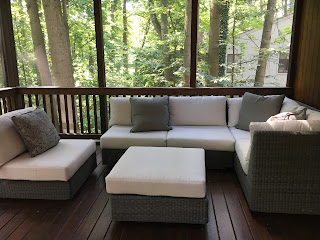 And while much of the house is still a mess of boxes or else the stuff that came out of those boxes, two rooms were among the first priorities for us to get settled. Here's Tara's office (I avoided the right half, still a work in progress): 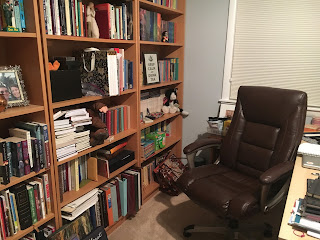 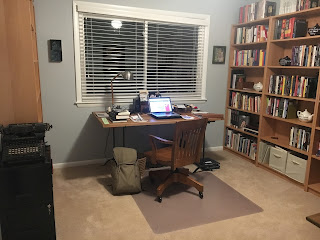 I've enjoyed posts from other SleuthSayers about writers and their working environments, several of them published just this year. Earlier this summer, Jan Grape did a nice round-up of various writer friends' workspaces. Paul Marks gave us a glance inside his office (and into both real and fictional versions of his days). And Dixon Hill treated us to before and after photos of the construction of his beautiful new office during our recent Family Fortnight.

Many of us with office space (me included) also write in other places, I recognize this. In my case, I also have an office on campus where I spent more time than at home, and then there's the library and occasionally a coffee shop, and back here at the house, I'm as likely to work at the kitchen table or the couch as in the office itself; I'm sitting on the couch right now, in fact, but mainly because it's better internet reception tonight.

So given all that, what's behind the desire to have an office of one's own? Part of it is, again, the space to work—to spread out a printed manuscript on the desk and look at it or to stare out the window (and I keep the desk facing that way, clearly) or to close the door and just think. Part of it depends on the things in the space: the books that have inspired me and that I keep at eye level on the nearby shelves, for example, and my own works in progress always within arms' reach too. In the picture of my office above, you might note a brown three-ring binder on the right corner; it holds printed drafts of various stories in one stage or another of needing attention. And the file cabinet on the left, the one with the old typewriter sitting on it? That's got notes on other stories and the draft of a (failed) novel—or, honestly, two. And the typewriter itself? It's an old one, of course, and I like to think that some other writer pounded out a story or two of his or her own on it. It's inspiring somehow, and so too is the artwork on either side of the desk and—not seen here—the framed poster on the wall behind my chair, from an exhibition at Trinity College in Dublin about the great detectives, a reminder of the tradition that informs so much of what I write, so much of how I think about what I write.

Tara, meanwhile, has her own approach: books too, obviously, but she keeps her desk sideways in the room, and she's looking for a chair for the other corner (unseen) where she can curl up and read. She has an Elvis lamp as well—a gaudy thing as far as I'm concerned (and I'm an Elvis fan, I should stress). But that's the beauty of the layout here: It's her space, she can do with it whatever she wants. It must be working OK for her already: Last week she finished a draft of her novel in the new office, and she's already gotten affirmative feedback from her first reader—hooray!

And as for Dash... well, beyond the garage, he's already taken over much of this house in one way or another. But he wanted a desk of his own as well, a place to draw actually, and at the same time he also wants to be close to us when he creates, so he's got a table and chairs in the living room, and we're planning to set up a craft corner if we can ever get all his art supplies unpacked, and then there's an old, old desk from my own childhood that he's taken a liking to... and I'll admit, I was glad to share some of my own office space with him. I hope you'll indulge this one last picture: 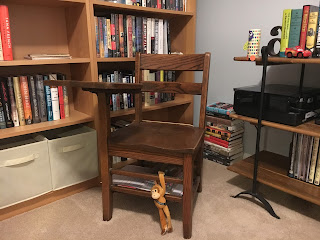 Writers who are reading this here: Where do you work? What in your space helps to spark creativity? Not sure how easy it is to post a picture in the comments—if it's even possible—but do offer some description at least if you can!


Countdown to Bouchercon! (...and a little BSP)


My story "Parallel Play" from Chesapeake Crimes: Storm Warning won this year's Agatha Award for Best Short Story and is up for both the Anthony Award and the Macavity Award at this year's Bouchercon. My fellow Macavity finalist Paul D. Marks, author of the terrific "Ghosts of Bunker Hill," offered a great post here recently where we joined other nominees Lawrence Block, Craig Faustus Buck, and Greg Herren to talk about the origins of these stories, along with Janet Hutchings, editor of Ellery Queen's Mystery Magazine, talking about the origin of Joyce Carol Oates' nominated story; do check out Paul's post and check out the links there in order to read the other stories too—such a distinguished batch of short fiction!

I'm hoping to arrange something myself with all the Anthony finalists for my next appearance at SleuthSayers in three weeks, along with announcements about my Bouchercon schedule—all of it rushing toward us so quickly!

Stay tuned for all that—and looking forward to seeing everyone in Toronto next month!