A few weeks ago, I attended the funeral of a former colleague. I have to admit that I'm approaching an age where I--and several of my friends--find this happening more often than we like. But it made me stop and think for the first time how many of my own works involve funerals, too. So far, eight of my eleven novels have funeral scenes or scenes in which characters talk about a funeral. So do both my current WIPs and at least one short story.

That made me try to recall "great literary works" that have funerals in them, and I immediately thought of Huckleberry Finn, The Great Gatsby, Wuthering Heights, The Loved One, Hamlet, As I Lay Dying, and Antigone. There must be dozens of others, especially when you think of all the "great literary works" I've managed to avoid reading. 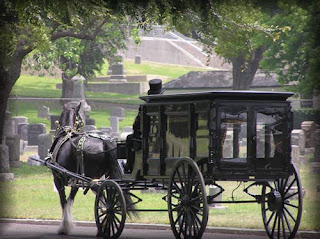 This makes sense because if a story doesn't have something at stake, the reader will stop reading and the audience will stop watching or listening. The two main issues that put something at stake are love and death because they cause irrevocable change. Love changes everything. Where would Romeo and Juliet be without it? Well, alive, you say. Exactly, I say.

Most of us in the crime writing biz focus on murder, not jaywalking or littering because it has a more profound effect on the people. My funeral scenes remind me--and my readers--that killing someone affects the survivors, too, the ones who have to carry on without that person who has been taken away. The protagonist has to figure out how and why so order can be restored, albeit differently. The friends no longer have that shopping companion or tennis partner. The lover no longer has his or her other half. The child(ren) no longer have that parent. The parent no longer has that child.

I sometimes use the funeral scene to provide a clue to the crime, but more often than not, I focus on the inner life of the characters for whom the landscape has changed. These people have to reinvent themselves in order to go on. We all do that many times in our lives (See Judith Viorst's Necessary Losses and Gail Sheehy's Passages for examples), but we crime writers grapple with it every time we put words on paper. 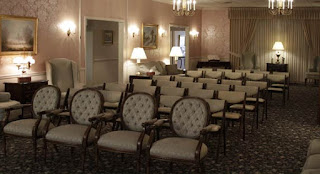 Maybe that's why I get annoyed when people look down at crime writers or romance writers as "mere genre fiction." Take away love and death, and what do you have left? 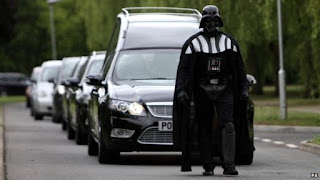