How to be a Hero: Debra Komar


by Melissa Yi
Trigger warning: sensitive souls should not read this. [NSFW. NSFL.]

Dr. Debra Komar spent over two decades investigating war crimes as a forensic scientist for the United Nations and Physicians for Human Rights. She testified as an expert witness in The Hague.
In other words, she’s a smart, hard-working, funny and unflinching real-life hero who now writes historical crime fiction.
Capital Crime Writers featured her as a speaker this Fall. I wrote as fast as I could, but I still couldn’t get everything down. I recreated it as best I could, in an interview format, to give you three simple lessons on how you can be a hero too.

1. Work hard.
Melissa Yi: I’m an emergency doctor, so I know how to work hard. But I have no idea what it’s like to do a genocide investigation. What does it involve?
Debra Komar: “Start with witnesses and aerial photos. Go in. Exhume. Take photos. Identify the remains. Return them to families. Create the narrative.”
So when you’re on the ground, what is your day-to-day life like?
“In Iraq, there were shipping containers around us, 75 people in a room. Only eight of them were the scientific team, but you need that many to get you out safely and back in. For six months, you work twenty hours a day, in the desert, with people shooting at you, emptying graves and doing autopsies all night.”
That sounds…
“Soul-destroying.”
I’m not sure  I could do that.
“It was the same 19 of us who’ve shown up for the past 20 years. You’re considered retired after ten missions. I did 18.”

2. Learn how to laugh.
How did you deal with it?
“A lot of people in my industry drink too much. My way was to turn off emotion…and [use] morgue humour.”
Komar teaches forensic science, and she has some popular sessions like Museum (autopsy lockers full of interesting specimens. One of them was filled exclusively with rectal foreign bodies, i.e. items pulled exclusively from a rectum).
They also played Spot the B.S. They’d play a clip from TV, and students would call out the errors.

3. Learn how to leave.
How did you become a writer?
“I always wanted to write. I had a quiet agreement to myself: I’d do this work as long as I could, and then retire.”
So you’re retired now?
“It’s hard to retire. I still have students, and I appear in court.”
Was it hard to make the transition from genocide investigation to writing?
“When you work in a morgue, you realize life is short. I was prepared to fall on my face and fail, but I wasn’t willing not to try.”

When Komar started writing true crime books, she chose to write historical crime. Which doesn’t mean she pulls her punches. 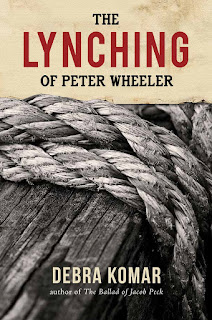 For example, in The Lynching of Peter Wheeler, she describes the Nova Scotia case of 14-year-old Annie Kempton in 1896: someone clubbed Annie with a piece of firewood and slit her throat three times with a kitchen knife, then sat down and ate a jar of homemade jam, leaving a spoon covered in bloody fingerprints, before abandoning her body.
Peter Wheeler, a “coloured” man, found her body when he came to the house to buy milk in the morning. In this book, Komar explains why Wheeler was innocent and how racism, the court system, primitive forensics and the media played a role in convicting and hanging him. {Publisher link; Amazon link} 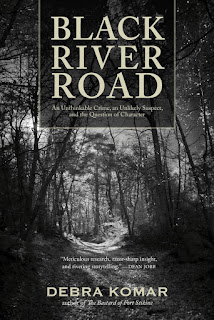 In her most recent book, Black River Road, Komar follows teenaged berry pickers in Saint John, New Brunswick, in 1869, to discover the decomposing body of Maggie Vail and her child. The accused? John Munroe, an architect, the lover of Maggie Vail and father of her child, who claimed he was innocent because his character would not permit him to commit such a heinous act. Komar explores the role of character in the court of law in a world before forensic science became the star witness. {Publisher link; Amazon link}
*
After I met her at CCW, Komar generously agreed to read an excerpt of my novel, Human Remains. In the second chapter, Dr. Hope Sze and her boyfriend Ryan confront a dead man, thanks to a Rottweiler named Roxy.
Komar wrote, “It's clear you are a doctor, not in a bad way.  You keep it simple and define terms were necessary - all very good.  You also do a great job of capturing the naïve enthusiasm of a resident - wanting to help, even in the face of a clearly deceased individual.  We've all seen (and been) overanxious eager residents that think they can bring people back to life.”
She explained that Hope shouldn’t disturb the scene and the forensic evidence, but the operator would defer to Hope’s medical expertise in resuscitating, because saving a life takes precedence over preserving evidence.
I should mention that she said the operator wouldn’t normally put Ryan on hold to debate the point, but I kept that bit in as creative license. All this to say that Komar was exceedingly generous with her time, and I am grateful to Capital Crime Writers for the opportunity.
*
Komar recently completed a writer-in-residence position at Pierre Burton House in Dawson City, Yukon, in preparation for her next book. If you follow her on Twitter, you can see some photos of dogsledding and a thermometer hitting almost -40 in both Celsius and Farenheit.
In other words, when you’re a hero, you may never stop creating adventures for yourself and your readers.


Long may she reign.