by Art Taylor
Last weekend's Virginia Festival of the Book in Charlottesville was lush with great authors, and I was grateful for the chance to spend time with various friends from the mystery community: seeing Steve Weddle first thing and at various points throughout the day; catching up at lunch with Michael Sims; moderating a panel with Megan Abbott, Bill Beverly, and John Hart, and then joining all of them along with Meredith Cole and Laura Lippman for drinks afterwards; enjoying Lippman's talk the next morning at the brunch, and then attending panels later with Leone Ciporin, Diane Fanning, Con Lehane, Steph Post, Bradley Spinelli, David Stewart, and David Swinson; and spending much of Saturday at the Sisters in Crime table at the Lit Fair, along with Val Patterson and Rosemary Shomaker. It was star-studded start to finish and great fun all around.

But it was a conversation with a woman named Sandy who stopped by the Sisters in Crime table that stands out as a highpoint.

Sandy is a friend of the former director of the VA Festival of the Book, and while she has a home in Charlottesville, she has lived most of her life in France, where she moved after graduation from college. I don't recall how we got on the topic about the busyness of schedules, the busyness of life, but I think it started with something about email and then some discussion about the recent French law giving many workers the "right to disconnect" from email, helping to build a separation between work life and private life. Sandy began chatting about the differences in the French schedule vs. the U.S. one, and about the built-in "pauses" in the day, whether time for coffee mid-morning or afternoon or for lunch—an actual lunch, with people and conversation—at mid-day. I nodded along in agreement, eagerly, even while I couldn't help but admit that most days (OK, every day) I eat lunch at my desk, working right through, hardly slowing down at all, and my own "pauses" usually never take me from the computer screen—simply a brief graze through Facebook before turning back to work at hand.

My wife and I—like so many people we know—often feel overwhelmed by all that we have to do, between our day jobs, our writing aspirations, our parenting, and then the never-ending list of chores and errands and.... The first thing we do each morning is to check our phones, a check-in of the calendar ahead, already trying to map out some strategies to navigate the to-do list, and a glimpse at the fresh onslaught of emails waiting to be answered (or the backlog of emails unanswered, as many of my own friends and colleagues know too well about me). And I hate to admit this, but our son Dash often get caught up in the busyness of those schedules too. I don't know how many times I tell him each morning something along the lines of "Ok, let's go" and "Time to get ready" and "Please eat the rest of that toast" and "Seriously, Daddy's got to get to work"—the clock ticking, frustrations building.

This isn't a woe-is-us post, I should stress—again, these are experiences I think most of us have had—but I just wanted to offer a bit of context for my appreciation of what Sandy was sharing with me. And I shared in turn with her a recent column that cookbook author Dorie Greenspan published in the Washington Post, echoing much of what Sandy and I were talking about. The column showcased a recipe for Cheesy Bacony Quick Bread, but it was Greenspan's commentary that had stuck with me as strongly—and I'll quote the opening of it here:

I’m in Paris a whole less than I’m in New York, yet I see my French friends a whole lot more. It’s not that I prefer the French set. It’s not even that I’m more gadabout here. Nope, I think it’s because there are so many more opportunities to see friends in Paris, and they’re all built into the rhythm of the day.

In addition to breakfast, lunch and dinner, there are three other let’s-get-together moments:

Pre-work. The cafés open before the crack of dawn, and sharing the first coffee of the day with a friend at your regular place is simple. (My husband and our friend, Bernard, meet five days a week at the Petit Suisse, where the waiters start making their espressos as they see them coming down the street.)

At about 4 p.m. for goûter. While the word “goûter” is pretty much reserved these days for kids’ afterschool snacks, the practice of stopping for something sweet continues among adults, giving all of us grown-ups a kind of bonus: the chance to see friends and to be indulgent.

This is, I should also stress, not a post about how the French do it better.

I mentioned in my St. Patrick's Day post at SleuthSayers that I'm no fan of over-inebriated crowds, but I do take an evening cocktail fairly seriously as part of a demarcation between the work day and more personal time, and a full year before that French law, I made a New Year's Resolution to put my phone away each night at 6 p.m.—I even have an alarm set to remind me—to try to avoid being pulled into email or news or whatever, another demarcation. After reading Greenspan's column, my wife Tara and I made a batch of that quick bread, and we now have slices of it in the freezer to take out from time to time as part of our own heure de l'apéro—and the emphasis on that word hour leads me to quote from another writer, Bernard DeVoto, whose ’40s-era classic The Hour: A Cocktail Manifesto originally cemented for me some of these ideas of marking the end of the workday, the beginning of time with family and friends or time for self. Here's a sample from DeVoto's book: 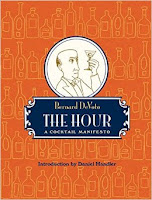 I will inquire into no man's reasons for taking a drink at any hour except 6:00 p.m. They are his affair and he has a rich variety of liquors to choose from according to his whim or need; may they reward him according to his deserts and well beyond. But when evening quickens in the street, comes a pause in the day's occupations that is known at the cocktail hour. It marks the lifeward turn. The heart wakens from coma and its dyspnea ends. Its strengthening pulse is to cross over into campground, to believe that the world has not been altogether lost or, if lost, then not altogether in vain. It needs a wife (or some other charming woman) of attuned impulse and equal impatience and maybe two or three friends, but no more than two or three. These gathered together in a softly lighted room and, with them what it needs most of all, the bounty of alcohol. Hence the cocktail.... When we summon life to reveal forgotten benisons and give us ourselves again, we do so peremptorily. Confirm that hope, set the beacon burning, and be quick about it.

The emphasis here has been on food and drink, I recognize—in my conversation with Sandy and in the passages I've quoted. But I should stress here too that this is not a post on cocktails or small bites. In fact, what prompted me to write this column has little to do with any of that and more about the pause itself—the moment of appreciation.

As another, not unrelated, New Year's Resolution this year, my wife Tara and I began to make notes at bedtime each night about the highpoints of our day—some good thing that had happened, some moment of joy perhaps—a resolution I know I've mentioned in this space already, but I don't think I've mentioned how difficult it's been some days for both of us to recall a highpoint amidst the busyness and duties and all. Wednesdays are my busiest days of the week this semester, teaching from morning until 10 p.m. at night and often pushing right up to class time to finish reading and prep and grading for each course. On these Wednesdays, Tara has been picking up our son Dash from school, and I've been working in my office not just through lunch but through dinner as well—long days, as I've said.

On Wednesday of this week, however, my wife was running late with work herself, and I walked to pick up Dash at his pre-school here on campus and let him visit my office until Tara could pick him up.

I still had dinner in my office before class, still had a long night ahead and didn't get home until past 10:30—but first Dash and I strolled across campus, and I let him lead the way, following both his path and his pace as we talked about his day and about what he wanted to see in my office and about his plans with Tara for the evening ahead. In my office he played with a toy I have here (a Lego he'd made and that he'd let me take to my office and that he took home again) and he met a couple of other professors. As we walked up and down the stairwell we played a game of hello and goodbye that he'd enjoyed in the past and remembered, a big grin spreading.

It was, at most, about half an hour together between pick-up and hand-off, but it offered the much-needed pause.

Later that night, after class, I wrote about our time together among those notes about small moments of joy.

And then the next morning, amidst the "Ok, let's go" and "Time to get ready" and "Seriously, Daddy's got to get to work," while I was getting that lunch packed and prepping Dash's snack and gearing up for everything, Dash stepped away from that toast he wasn't eating fast enough. Just as I was about to ask him to please go back and finish his breakfast, he handed me a picture he'd been drawing while he ate.

It was, of course, another pause worth savoring—and forget that toast, no food or drink required here either. 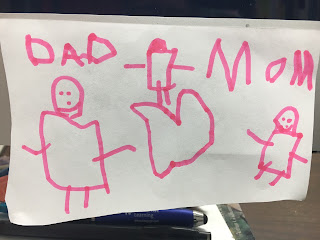