The HIGHS and Lows of being an Author

(This was the second half of my Mattress of Ceremonies (MC) address at the Bloody Words Mystery Conference Gala in Toronto this June.  Which was a blast and a half.  I even have a photo of me giving this address.  It actually looks like me, which will be explained below. The Spanish Flamenco outfit cannot be explained.)

We all know the highs.  Those delirious times when you win awards and/or get a royalty cheque that takes you and your family to Europe rather than McDonalds.

I’ve had a few highs this year, winning the Derringer Award and the Arthur Ellis Award in Canada.  And I’m exceedingly grateful for them.

Because - thing is - authors get a lot of lows.  It's not just the bad reviews and rejection slips.  For some reason, most of my lows seem to cluster around that scariest of all activities: the book signing.

Some people think the worst thing that can happen is nobody shows up.  Or when you’re on a panel of 4 authors, and only three people show up.

But that’s not the worst.

1.     Worse is when five people show up for your reading.  And they’re all pushing walkers. And half way through, when you’re right in the middle of reading a compelling scene, one of them interrupts, shouting, “When does the movie start?”

2.     I did an event this year with two hundred people in the audience.  I was doing some of my standup schtick, and it went over really well.  Lots of applause, and I was really pumped.  I mean, two hundred people were applauding me and my books!  A bunch of hands shot up for questions.  I picked the first one and a sweet young thing popped up from her seat and asked in a voice filled with awe, “Do you actually know Linwood Barclay?”

3.    Another ego-crusher:  I was reading in front of another large crowd last year.  Same great attention, lots of applause.  I was revved.  Only one hand up this time, and she said, in a clearly disappointed voice:

So I said, “Sweetheart, not only that, I don’t look anything like my author photo.”

4.     One of the best things about being a writer is getting together with other writers to whine about the industry.  I was at The Drake in Toronto this year with a bunch of other Canadian crime writers, Howard Shrier, Robbie Rotenberg, Dorothy McIntosh, Rob Brunet… who am I missing?

We were whooping it up in the bar, moaning about the book trade.  Someone bought a round.  And another.  And then I bought a round.  And soon, it became necessary to offload some of the product, so I went looking for a place to piddle.  You have to go upstairs in the Drake to find washrooms, so I gamely toddled up the stairs, realizing that I couldn’t actually see the steps.  I was probably not at my best.

I made it to the landing at the top and scanned a door in front of me.  It had a big “W” on it. That seemed sort of familiar, but fuzzy, you know?  Then I saw the door to my left.  It had an “M” on it.  So I thought, ‘M for Melodie!’ and walked right in.

Howard, I think you had probably gone by then, but the guy at the urinal asked for my number.

Melodie Campbell writes funny books, like The Artful Goddaughter. You should probably buy it because she, like, writes about the mob. 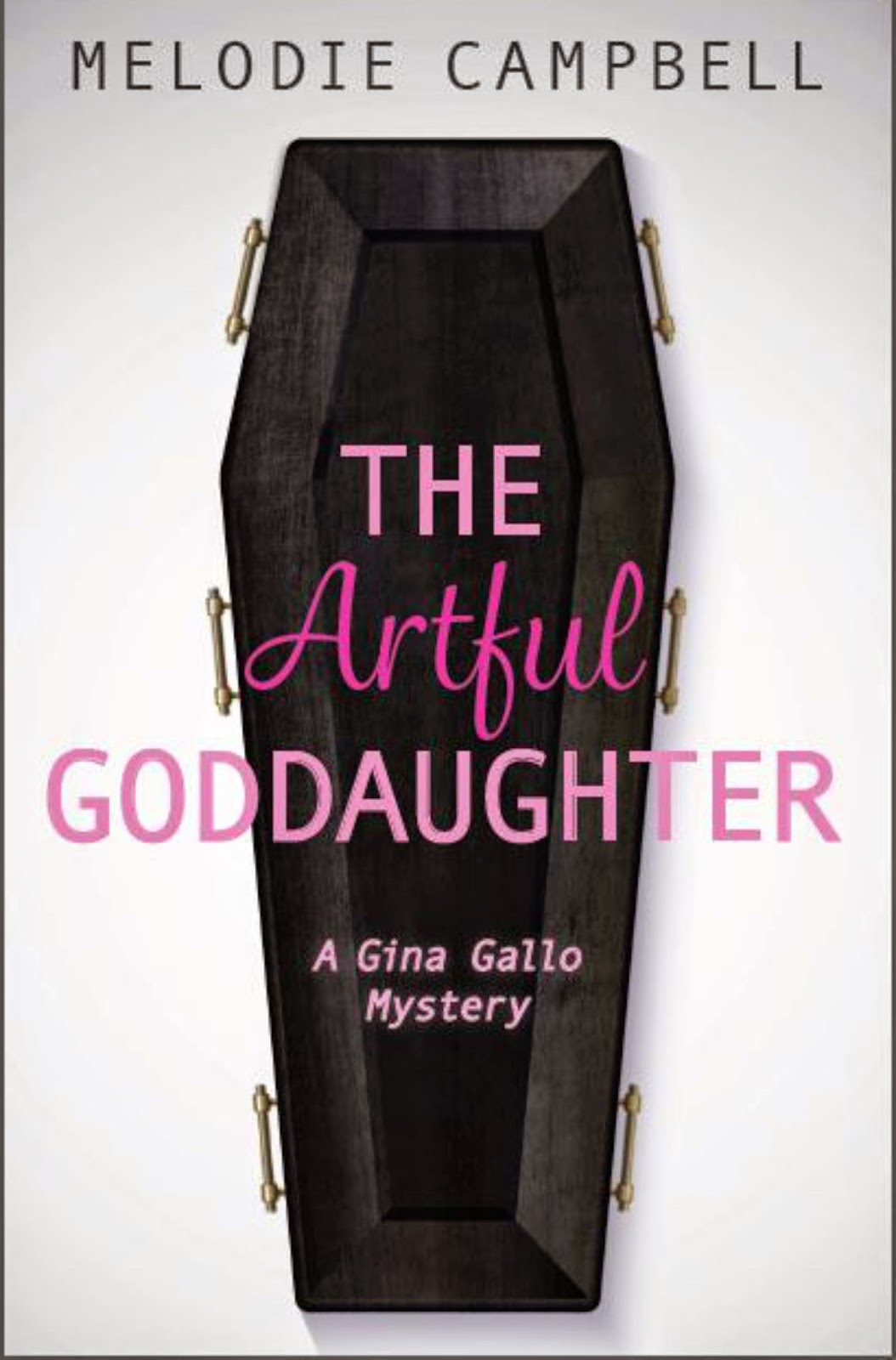 I've twice walked into the wrong restroom and I didn't have the excuse of being tipsy. And one I entered for exactly the same reason you did. It was a highway restaurant stop. When I was a child, my mother used nail polish to paint the initial of each kid on his toys. I often walk around in a fog and when I went to the loo, there on the door was a giant, hand-scripted letter L. I opened the door and found a room painted in pink… much like my face. Oops.

Melodie, on a separate topic this week, our thoughts are with you, Darlene, and our other friends north of the border. In case anyone in the world hasn't seen it, check this powerful visual memorial.

Melodie, most of my readings and signings have been great fun for me, but I do remember a wrong bathroom incident at the old Adams Mark hotel in downtown Columbia prior to my first book being published. I'd performed my clown act at a convention. When it was over, I dashed to the restroom and accidentally right into the men's room. I gasped and then realized that in full clown makeup and clothing, gender was not apparent. I went into one of the few stalls, closed the door, took care of the beer, strolled out casually, wished hands and left.

Melodie, I have a signing coming up today, at a chain bookstore about 100 miles east of here. There are sure to be mishaps--you can count on that--but at least I won't be doing a reading.

Great post, as usual. I needed a laugh this morning.

It is only 7 something AM in Manhattan and you already have me howling with laughter! Thelma Straw

Leigh, thank you for the kind words. Yes, we have had a week of tests in Canada. There is a Facebook poster going around that says it well: Keep Calm. You are Canadian.

Fran, PLEASE post a photo of you in clown gear! I am smiling just thinking about it.

John and Thelma, the darn thing is, every word of that post is true!! And there is a story about how I got called the Mattress of Ceremonies...Another time, another post.

Good stuff. I have a secret weapon for signings. I bring my autoharp and strum quietly. First, that means that I am not twiddling my thumbs, which looks bad, and second, it gives people an excuse to come up and talk ("Is that a zither?") without being terrified I will force them to buy a book. The fact that my novel is set in the folk music revival helps, of course.

Melodie, LOL! Fran, I, too want to see the clown photo.

Robert, I love it! Okay...how can I use that theme? hmmm...I trained for Opera. Do you think...?
My books are about a mob godddaughter. Maybe a violin?

@ Melodie. Have a violin case on the table, but when you open it there will be a tommy gun in it. Fake of course. Tell people it's for -- um -- reluctant book buyers.

Jody, that is perfect. And would you believe, I can play the violin? Actually have an old fiddle here. Now, to find the case...and an appropriate tune. Maybe...The Godfather theme music? :)

Speaking of violin cases, Melodie, this piece may have been before your time: http://www.sleuthsayers.org/2014/03/paddy-v-puzo-etal.html

Wonderful, Melodie! I, too, get lots of laughs when I do presentations. Not generally in the right places, however, and more like snickering.

I think Jody's onto something. But, I'd suggest you play the violin, with the open violin case on a table beside you . . . and a closed cello case leaning up against it. Let folks see that you're selling a mob-themed book, and invite them to guess what's in the cello case. Maybe the winner gets a fee copy of a previous book you've written.

David, you've got me snickering, all right.
Dixon, I'm thinking a bass case? What a perfect hiding place for the body in book 5...grin.

Robert, I just followed that link and read the post! Man, did I go to the wrong high school. I would have loved St. Luigi's day. Hey...maybe, for the Derringer award night at Bouchercon...do we dare? I will if you will.

Melodie, in my second Callie book, Hey, Diddle, Diddle, the Corpse & the Fiddle, a dead body falls out of an upright bass case on stage. The puzzle is that the audience saw the musician take the bass out of the case at the beginning of the show, and the case was on stage the whole time. How did the body get into the case?

Fran, I remember that one!

Fran, that is fabulous! I haven't read that one. Putting it on my list...where's Santa?