We'll begin today's post with a quotation within a quotation, and end it by posing a conundrum for the reader.

First the quote within the quote. The initial one comes from The Great Game, Peter Hopkirk's magisterial history of the Anglo-Russian struggle for control of Central Asia (and by extension, both India and all trade routes to the Far East). Within that quotation lies a telling quotation from the recollections of one of the so-called "Great Game's" most colorful players, a British army officer and diplomat named Alexander "Bokhara" Burnes: 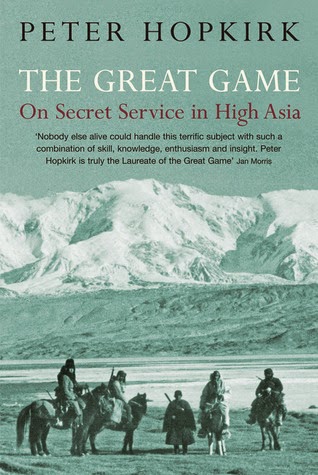 Finally in August 1831, laden with gifts and compliments, Burnes and his companions crossed back into British territory, making for Ludhiana, the [British East India] Company's most forward garrison town in north-west India. There Burnes met briefly a man whose fate was to be closely bound with his own - Shah Shujah, the exiled Afghan ruler, who dreamed of regaining his lost throne by toppling its present occupant, the redoubtable Dost Mohammed. Burnes was not impressed by this melancholy-looking man who was already turning to fat. 'From what I learn,' he noted, 'I do not believe that the Shah possesses sufficient energy to set himself on the throne of Cabool.' Nor, Burnes felt, did he appear to have the personal qualities or political acumen to reunite so turbulent a nation as the Afghans.

It almost goes without saying that not much has changed in or about Afghanistan over the 183 years since "Bokhara" Burnes wrote the bit quoted by Hopkirk above (Brutal terrain? Check. Unruly tribes with nearly no attachment to the central government? Check. Hostility to outside influences? Check. The list goes on...).

And yet so many things actually have.


Not least the fact that, as a result of events from 9/11 onward, most Americans have actually heard of Afghanistan and might even be able to find it on a map.

Another thing that has changed is the cessation of the at times unintentional Occidental practice of  transforming proper names and other nouns into sometimes wholly other words, or at the very least, of mangling them so badly in translation as to render them nearly unrecognizable.

Take Burnes' reference above to "Cabool." Anyone who knows anything about the region (or hasn't been living under a rock for the past 13 years) is likely quick to realize that Burnes was, of course referring to modern-day "Kabul," the capital of Afghanistan. You see this all over the place, especially during the 19th century, and particularly when reading historical accounts written by British soldiers, sailors, explorers, scholars, etc.

At times seems as if this is nothing more than an extension of the old joke about English gentlemen being fluent in any number of languages, so long as it's understood that they'll speak them s-l-o-w-l-y and with an impenetrable English accent.

For example, at the mouth of the great Indus River that drains all of Pakistan, a large chunk of
Central Asia and a significant amount of Northwestern India sits a port city called Karachi. I have seen this spelled a variety of ways, including "Kurachee," "Carratchee," and "Kharatchee."

And then there's "Hindoo" (Hindu), "Hindoostan" (Hindustan), "Peking" (Beijing), and a host of other place-names. The British take on the world they set out to colonize and "make English" through the administration of British laws and forcing British customs on the locals seems to be forever misspelled, especially from a modern perspective.

Now, of course this sort of thing isn't really limited to the British. It's just fun pointing out a few choice examples from Britain's storied imperial past.

In fact to do this is to be human.

Everyone does it. Corrupting and breaking down and reshaping words is part of what keeps languages "living." Seen the capital city of Turkey referred to as "Nova Roma" ("New Rome") as anything other than a term of art lately? That's the name the Roman emperor Constantine the Great gave the city when he founded it during the 4th century A.D. Or when was the last time that anyone other than indie rock jingle writers They Might Be Giants referred to this self-same city by it's later Greek name of  "Constantinople"?


(And now you've got it running through your head, admit it..."...If you've a date in Constantinople, she'll be waiting in Istanbul!")

In fact the modern name "Istanbul" comes from an old Greek nick-name for the city: "eis tēn polin" ("into the city").

Anyway, for me where it gets really sticky is when you're trying to write fiction. And not just fiction, but historical fiction about places with history such as these.

Allow me to refer yet again to Hopkirk's example above. Elsewhere in his book (and if you've not read it, you really owe it to yourself to give it a look. "Compelling" doesn't even begin to describe it.) he refers to the chief city of the Afghans as "Kabul," using the modern, accepted spelling.

But of course when quoting from an historical source it is of the utmost importance to preserve the text in its original form if at all possible. This is why actual misspellings tend to be quoted whole cloth (followed by a helpful "sic").

But what to do when writing, not history, but historical fiction?

Of course it really depends upon which person you're writing in. So much historical fiction these days is written in the form of a supposed first person memoir. This is especially true of historical mystery fiction.

If you're writing in the first person, you're golden. You can use any weird-ass, archaic derivation of one of the places you're discussing that pleases you. In fact if anything it's going to help establish your narrator as a product of the time about which they're (really you're) writing.

What if you're writing a third person multiple point of view story?

Case in point: as part of my current novel-in-progress, I have my protagonist talk about a visit to the Fiji Islands during the year 1840.

During this time period the word, "Fiji", had nearly as many old misspellings as "Karachi" (see above).


Think about it. As I mentioned in my last post, a good cardinal rule of historical fiction writing (and of fiction writing in general) that you don't want to put anything into your work that will jar the reader out of the story. Scare? Sure. Frazzle? Absolutely.

But if you knock your reader out of the story, they may just give up on it.

So how about it? If I have my protagonist talking about his cruise through Fiji, should it read: "I sailed the Fijis?"

Or should it read: "I sailed the Feejees"?

Or: "I sailed the Feegees"?

See the problem? He's not writing it down. He's talking about it.

Maybe not that big a deal for some, but I have heard many readers complain about just exactly this sort of thing.

What works for you, Dear Readers? Which option is least likely to take the reader out of the narrative, and why?