Gone South: Doing Something About February


February, when the days of winter seem endless and no amount of wistful recollecting can bring back any air of summer.

February is merely as long as is needed to pass the time until March.

When my wife and I each retired in 2009 we had a shared goal. We wanted to never again endure the month of February in Washington, D.C. So far we have made good on that quest, and this year, as in previous Februaries, we are holding forth in a rental condo in Gulf Shores, Alabama.

Mao Tse Tung was an advocate for the battle tactic of planned retreats, and in no year has a planned retreat from the frozen north made more sense than this one. When you look at those weather maps that have been so common this month, with that bulge of blue swallowing up the Midwest and the entire East Coast, we are right down there at the bottom -- where, in the course of a few scant miles, the color of the weather map on most days shifts from blue, to green, and then finally to yellow, where we are. It doesn't always work -- this year in our first few days here we did find ourselves in the path of that ice storm that hit the south, and that left us apartment bound for a day, but by and large we enjoy 60s when our home in D.C. has to tolerate 20s.  And this week it is all sunshine and mid-70s.

So we run away before the cold. And in doing so we escape the dreary and dreaded month of February, at least as it is experienced up north. Paradoxically, while only 28 or 29 days, February nonetheless plays out as the longest month of the year. It is cold, the days are short, and it invites the onset of cabin fever. When you are held captive by the deranged beast that is February -- that is, when pressures of life conspire to hold you in place, precluding that planned retreat -- the result challenges even the stalwart optimist in each of us.  It can tempt us, in fact, to retreat from rational thinking in our quest for an escape.

When I was a sociology major back in college I remember studying the cargo cults of the South Pacific -- island tribes that, watching the cargo-rich U.S. air fleets in World War II fly overhead, were inspired to build mock runways on their islands in hope that the planes would land there as well. We smile and shake our heads at the naive innocence of all of this, pinning hopes on magic.  But every year on February second, no doubt in trepidation of what lies ahead, we trot out analogous witchery. We gather in ritualistic regalia, we sometimes require that only German is to be spoken, and we scrutinize awakening groundhogs in an attempt to discern whether they will see their shadows.  All in the hope that ritual can somehow foreshorten our misery. 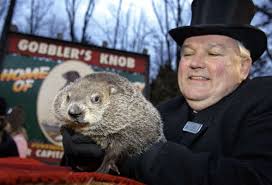 This year, as reported in the Washington Post, Phil the groundhog in Punxsutawney, Pennsylvania saw his shadow, which, per legend, meant six more weeks of winter.   The National Oceanic and Atmospheric Administration (NOAA) has dismissed statistically any soothsaying abilities of Phil and his cohorts, and on bright and warm days we smile and shake our heads at the whole cargo cult ritual of this annual event. The planes do not arrive for the cargo cults, and spring does not arrive for us.  But that does not stop us from showing up each year to watch the groundhog. And this is not limited to that town in Pennsylvania. The Washington Post reports that other groundhogs, also sought out each year in a quest to short-hop the miseries of February, include:

And in Washington, D.C., we add Potomac Phil to the list. The Washington would-be prognosticator is actually a stuffed Groundhog, but it nevertheless somehow manages to impart a prediction annually at a gathering at Dupont Circle. 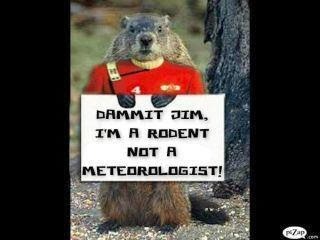 It is not just those of us in the United States who behave this way. In Serbia, for example, on February 15 during the feast of celebration of Sretenje or The Meeting of the Lord. celebrants watch a bear that is awakened from winter sleep. According to legend there if the bear sees its shadow it goes back to sleep for another 40 days, and winter continues. European folklore generally also looks to badgers or bears, usually on February 1, in hope of a signal that winter will end early. But, again according to NOAA, approximately 75 percent of the time there is no early spring, and our hopes are in vain. Regardless of the vagaries of animals’ shadows we, like those South Sea islanders tempting the planes to land, get nothing.

In fact we do worse -- we get February.

All of these February rituals simply evidence our desperation. Those who face February without the possibility of retreat can be rendered senseless and desperate in their endurance. A resort to witchcraft is but a small step where nothing rational works.

So. Where did this affront that is February come from in the first place? As one might suspect, the dratted month owns a checkered past. No such month existed in the early Roman calendar, a ten month affair that simply left the period that is now January and February a nameless blot of bleak days. In effect the early Roman calendar at the end of December said That's it.  See you in March.  When February (along with January) eventually was added to the Roman calendar, around 700 B.C., it was a period of varying lengths -- 23 to 27 days -- and a thirteenth month, Intercalaris, was inserted between it and March as a device to re-align the calendar with the seasons each year, a necessary tool since the year, but for Intercalaris, was calculated out at 355 days.

Under the reforms instituted with the Julian calendar, Intercalaris was abolished, the year was set at 365 days, and February was likely assigned 29 days. I say “likely” because there is some argument as to how February became a 28 day month (except in leap years). According to popular history this reduction occurred as a result of rivalry between Julius Caesar and Caesar Augustus. Julius Caesar had already requisitioned and re-named the seventh month of the year “July,” in honor of, well, himself. Then, so the story goes, when Augustus Caesar ascended to power he decided he needed his own month as well, and we were given a re-named eighth month -- “August.” Up until that time all months (except for February) were either 30 days or 31 days, alternating on an every-other month basis. But Augustus wanted his month to be as long as Julius Caesar’s, so he robbed a day from February and placed that day in August, making it 31 days as well.

Fear not. There is a demented rhyme to the madness of today’s discussion. Our dread of February, as evidenced, among other things, by that groundhog fetish, coupled with our willingness, evidenced by the Romans, to first invent, and then re-invent the length of February, provide something of a spring board for creative thinking. Even when we are not free to run south in front of the dreaded second month of the year, might there still be some other alternatives that we could pursue?  Something that does not exactly solve the problem of February but still offers more than a mere placebo? We cannot end winter sooner, but is there some lesser measure that, while realistically ineffective at combating winter, could nonetheless help to avenge the wrongs done to the tortured and shivering masses better than that resort to groundhogs, bears and badgers?

I have a modest suggestion.

We all accept that February already differs from other months in the number of its allotted days. And the Romans have already fiddled with that number, as discussed above, before agreeing on our present 28 day (and 29 day leap year) approach. Since the month is already demonstrably too long at 28 (or 29) days, my proposal is simply this: Chop another week off of it. Make it 21 days -- a three week sprint from January to March. And then take that extra week, the one we just chopped, and plop it down smack dab in the middle of June -- a month that often seems too short.

What about leap year? you ask. Simple, again. Leap year day should be designated a national holiday. The holiday would float, and would be used, as needed, as an extra day adjacent to July 4, thereby ensuring that Independence Day would always at the least be a two-day holiday. I know, I know -- I see all of you math majors waving your hands, eager to point out that the extra day would be needed whenever Independence Day falls on a Tuesday, Wednesday or Thursday, and that these alignments occur more than once every four years. The solution remains simple -- just take those extra days, as needed, out of February.  If the second month of the year ends up less than 21 days, I mean, who is going to complain?