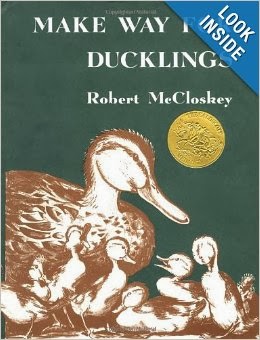 I'm prompted to these musings by a post my pal Art Taylor and his wife Tara Laskowski made on FaceBook about their son Dash, and his reading enthusiasms. Dash is a year old, and likes Robert McCloskey's MAKE WAY FOR DUCKLINGS. Art says Dash has already memorized it, when Art reads it aloud to him.

I suggested a couple of other books to add to Dash's reading list, as he gets a little older. I remember a guy named Robert Lawson, who was an author-illustrator, like McCloskey, and told familiar stories from an unfamiliar POV. Ben Franklin's pet mouse, for example, or Paul Revere's horse. No man, it's said, is a hero to his valet.

The grand-daddy, of course, is Kipling, and THE JUST-SO STORIES. It's past time I gave him credit for his abiding influence on my own writing. My dad read those stories aloud to me, when I was sick in bed, at four or five. I still remember the smell of the inhalator, a kind of steam device, with a cup of spice-flavored medication. It was supposed to make your breathing easier. What actually set my mind at rest was the sound of my father's voice. We all have a comfort zone.

At what point do we graduate to more sophisticated stuff? Sake of argument, when we start reading on our own, at six or seven, say. I had an interesting exchange with my pal Johnny D. Boggs a little while back. THE SEARCHERS was being shown at the Lensic theater, on the big screen, and I asked Johnny if he were going to take his son Jack (THE SEARCHERS being one of Johnny's favorite pictures, and mine). Johnny said no. He thought the movie was probably too dark for Jack, who was, I think, eight or nine at the time. Maybe the threshold is our exposure to ambiguity, or a lack of moral certainty, and THE SEARCHERS sure fits.

CHARLOTTE'S WEB. E.B. White was an unsentimental cuss, and he doesn't sugar-coat the story. Charlotte's "web" is of course all the animals
in the barn, not just Wilbur, and death is part of their lives. Wilbur himself barely escapes being turned into bacon. But the book isn't really sad. it's more of an affirmation, that there's rebirth.

On the other hand, OLD YELLER. I think I was ten or eleven when I read it. It was probably on my summer reading list for school. Jeez, what a heartbreaker. The dog, after all, wasn't responsible. The real choice is the one the kid has to make, and in fact there is no choice. He has to do it.

So, what's appropriate, for Dash, as he grows up, or Jack? When do we, as parents, or role models, teachers or even librarians, stop making the decisions for them? I had dinner with some people, a few years ago, and there was a teenager there, with his dad, and the kid was nuts about science fiction. I think we started talking about DUNE, or STRANGER IN A STRANGE LAND, and his dad interrupted to say it was all crap, and the kid just turtled in on himself, and the conversation dead-ended. I didn't say anything to his father, but it was discouraging. We should all be allowed to read crap, although I don't agree with the guy's description of SF. How many of us have actually ground through MOBY-DICK, or BLEAK HOUSE? I've rediscovered Dickens, in later years, but if he's crammed down your throat in high school, to fatten up your liver, you're like one of those unhappy geese.

One of these days, Johnny will take his son Jack to see THE SEARCHERS. And one of these days, Dash is probably going to read OLD YELLER, and cry at the end, the way I did. Especially when we're young, it seems to me, we inhabit the stories, or they inhabit us, and take on a life of their own, as real as a dime. A spell is cast, and I doubt if we ever break free of it. Innocence is never really lost.
Posted by David Edgerley Gates at 00:30