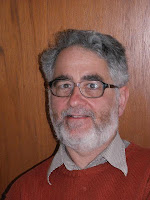 Well, mostly it's hard work, that's all.  You have to sit at a desk and think when it would be so much more fun to see what's happening on Facebook or Youtube.  Turning a blank screen into deathless prose isn't easy.

If you're lucky you have a good idea in your head of what you are trying to create.  Then all you have to do is to convert what you see in your head to words that will make the same picture in other people's skulls.  Sometimes it's frustrating, when you can't make that translation.

And sometimes it is tedious.  That's especially true when you really have no idea where a scene is going, but you know it has to be there so you slog through it.  As my character Shanks puts it in one story, "sometimes you just pile the words together like bricks and hope nothing falls off."

All of that is true.  But sometimes...

I have been working on a  novel and the novel has five parts.  When I write a book I start with the sections I know best, hoping that writing them will reveal the parts that are less clear to me.  So I have spent the past month on Part Four.  I finished it and began slogging through Part Three, which I knew much less about.

Well.  Part Three ends with my main character taking a bus back home.    The scene needs to be there but there is no real action in it, so I had to keep the reader in my protagonist's head, letting his thoughts and memories become the action.

And what do you know?  Right at the end, in the very last slogging, brick-after-brick paragraph, my character revealed his motive for everything he is about to do in Part Four.  I didn't even know there was a motive that needed to be revealed, but there it was, waiting for me.  I had written the effect, and suddenly, pow, I was looking at the cause.