"He has never been known to use a word that might send a reader to the dictionary."
- William Faulkner (about Ernest Hemingway). 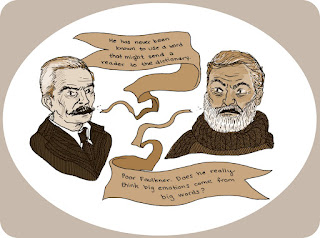 Besides being clever, these two statements express a profound philosophical gulf between two kinds of writing. As a college English major in the early 1960s, I found Hemingway’s language too plain and Faulkner’s so ornamented as to make the stories he was telling incomprehensible.

That is not to say that I reject plain diction. As a poet for thirty years, I was proud that no reader ever said to me, “I didn’t understand your poem.” My second book of poetry, if I remember correctly, contained only seven words of four or more syllables. Nor have I ever been afraid of “big words.” As a kid, I could rattle off “antidisestablishmentarianism” with the best of them.

Since my college days, the English language and its literature has endured what I consider the toxic embrace of Deconstructionism, with its irritatingly opaque invented vocabulary. (Can you explain what “semiotics” means?) Thank goodness that instead of going on for my doctorate, I ran away and joined the Peace Corps—and discovered mysteries and other genre fiction. I’m told that Deconstructionism lasted longer in American academia than anywhere else. And yet it’s Hemingway whose approach to language has triumphed. With my own ears, I’ve heard Stephen King (very much a writer’s writer) declare that his advice to aspiring writers is, “Read, read, read; write, write, write—and lose the adverbs.”

In the past few years, in the process of developing my craft to the point where I realize that the ability to self-critique is a never-ending process, I have come to understand what’s wrong with adverbial writing. Those tough action verbs can serve the writer well. But I still think it’s pretty weird for the arbiters of language to shun an entire part of speech. I have enjoyed reading work in which adverbs are used deliciously and evocatively to enhance the meat and potatoes of nouns and verbs. So it’s a different style. So what? Why not?

Hemingway and Faulkner, like cozies and noir, are too often assumed to be the only alternatives. Let’s hear it for the middle ground. Language can be rich without losing the reader and strong without being stripped stark naked. But what’s really dangerous is allowing any one literary style to be considered the only right way to write. By all means, let expansive writers rein themselves in by deleting adverbs and replacing Latinate words with their Anglo-Saxon-based equivalents. But let’s also invite the hard-boiled heirs of Hemingway to spread themselves a little. Stick in a couple of adverbs on every page, if not every sentence. Go on, try it. You might find it’s fun.
Posted by Elizabeth Zelvin at 00:01