A Different Band of Brothers


by R.T. Lawton
Many ideas start off with good intentions, but end badly. You could say that's what happened to the Cossacks in their roughly 550 year existence. While no one knows for sure where their name originated, some say it came from kazak, the old Turkish word for "free man" or "adventurer."
During the late 15th Century, Ukrainians suffering under the yoke of feudalism began running away to the south and settling along the lower reaches of the Dnieper River. Here, they lit the candle of their own freedom, setting up their own government and electing their own officials. If the community didn't like the leadership they were getting, then an open meeting was called, current officials resigned and new ones were elected.

Even though most of the Cossacks came from Slav heritage, anyone arriving at the settlement could become a member. His name might be Ivan or Ali in the morning, but all it required was being baptized with a name change and a profession of belief in Christianity to make him a Cossack before night fall. Each new arrival was issued a musket, lance, saber and dagger from the local armory of weapons seized from enemies. After that, the new Cossack was expected to become self sufficient and to contribute towards the good of the community.

They sustained themselves with fishing in the rivers, farming small plots for vegetables and grain, hunting deer, boar, ducks and pheasants, raising cattle for meat and leather, and growing vineyards and orchards for fruit and wine. Surrounded by enemies, they designated the four winds by Moscow and the Russian Tsar to the north, the Polish King and his holdings to the west, the Sultan and his Turkic empire to the south and the Tartar and Mongol tribes in the east. Constantly beset by one or more of these enemies at a time, the Cossacks quickly learned the art of warfare. Knowing that static defense would not protect their small settlements, they carried the war to their enemies. Raiding and plundering became a means of survival. In their time, various Cossack Hosts either knocked on the gates of Moscow or captured several Turkish cities on the Black Sea, going so far as to take the Spanish city of Saragossa. They formed alliances with the four winds as was necessary and broke those same alliances as was also necessary. 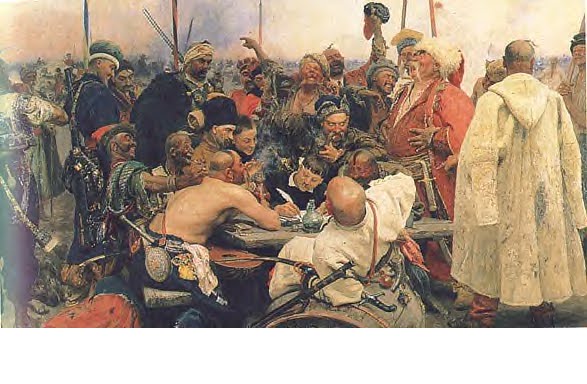 Courage in battle was one of the highest virtues a Cossack could display. And the highest form of courage was the rescue of a downed comrade in the face of enemy fire. Unwritten laws of the Brotherhood did not allow them to leave a comrade in trouble. In time, the Cossacks grew to become a military caste. Around the age of fifteen or sixteen, as needed, each male was equipped by his family with a horse, weapons, a quantity of food and an extra set of horse shoes before being sent off to the main Host or the local military cordon.

With the Cossack's great expansion, their sense of freedom and bravery began to work against them. Having no central government, each Host responded only to its own ataman or hetman. As they spread along the Dnieper, Don, Volga and Terek rivers, their politics splintered. Being of the same religion, they mostly aligned themselves with Moscow and the Tsar, however even that alignment of faith suffered when the Russian church changed the method of crossing oneself, plus a few other religious matters. Those conservative Russians who resisted the changes became known as the Old Believers and went south to eventually join the Terek and Greben Cossacks.

Also, upon the death of the old Tsar or Tsarina, contention for the throne further split the Cossack's alliances. Some Hosts backed one contender or pretender, depending upon how their leaders felt about the candidates, while another Host rose up in rebellion, and they fought each other. Moscow royalty soon saw the danger of having such uncontrollable large military groups on their southern doorstep. Eventually, the Muscovy throne crushed each Host and brought them under subjugation.

By the mid-1800's, the Cossacks were relegated to to the role of frontier guards and had Russian troops quartered in their Cossack villages along the Terek and Greben Rivers. This produced a mix of cross emotions within those communities. Whereas the Cossack male had long emulated his Chechen enemy in clothing, weapons, mannerisms, courage and warfare, he also respected this same enemy who lived in the Wild Country south of the Terek. Conversely, he found his ally, the Russian soldier, to be contemptible. Seems no one likes an occupation army. This 1850's time period during the decline of Cossack power is where I set my Armenian series of historical mysteries, a time and place which had been visited  and written about by Leo Tolstoi who left Moscow in his 20's to see Russia's southern frontier.

For those of you who remember Yul Brynner in the 1962 movie Taras Bulba, based on Nikolai Gogol's short novel of the same name, here is a clip from the Hollywood version.

or, if you prefer, a trailer from the 2009 Russian remake in the Ukraine.

Both movies were set in the 16th Century, when Poland was invading the Ukrainian Cossacks.

During the Russian Revolution, the Cossacks split between the White Armies and the Red Armies. The losing White Cossacks ended up emigrating to other countries, else suffered under the Bolshevik's rule. Twenty years later saw Red Cossack units on horseback charging into invading German tanks on the field of battle. In time, Stalin, not being one to let a perceived problem get ahead of him, forbid the Cossack brotherhood to exist.

The candle went out.

The Cossacks had begun with noble ideas of freedom, courage and brotherhood, but history also shows times and places where they went off the track. In the end, they were overwhelmed and ceased to exist. Only in the last decade have some Cossack families openly tried to revive their heritage, much as other ethnic groups have done.
Posted by R.T. Lawton at 00:01