In 1913 noted columnist and short story author Ambrose Gwinett Bierce, then 71 years old, rode his horse across the Rio Grande River into the Mexican town of Ciudad Juarez and from there into oblivion.  Bierce’s intention was to observe first-hand the Mexican revolution, which at the time was well underway.  Bierce managed to track down the Mexican revolutionary leader Pancho Villa in Ciudad Juarez and then reportedly tagged along with Villa’s ragtag army of revolutionaries at least as far as the Mexican city of Chihuahua.  While there is some argument among historians, apparently the last communication from Bierce was a letter written to a close friend, Blanche Partintron, on December 26, 1913.  Only notes concerning the letter, safeguarded by Bierce’s secretary, survive, but according to those notes the letter closed with the following:

“As to me, I leave here tomorrow for an unknown destination."


There are many theories concerning what eventually happened to Bierce.  In The Old Gringo, by Carlos Fuentes, the author speculates that Bierce was eventually shot in the back while serving with Pancho Villa’s band of desperados.  The1998 film version of Fuentes’ book, featuring Gregory Peck (in one of his last roles) as Bierce, opts for the same ending.  Local legends in the Mexican Sierras hold that Bierce, who had reportedly become somewhat critical of Pancho Villa toward the end, was executed on Villa’s orders before a firing squad.

Bierce was always a dark fellow who marched to a different drummer.  The essayist Clifton Fadiman has argued that "Bierce was never a great writer. He has painful faults of vulgarity and cheapness of imagination.”  However, Fadiman also notes that Bierce’s “style, for one thing, will preserve him; and the purity of his misanthropy, too, will help to keep him alive."  Fadiman’s criticism of Bierce may be unfounded – Bierce wrote many columns and short stories, and his stand-out short story An Occurrence at Owl Creek Bridge, to single out one, has likely been the basis of more television and radio dramas – most recently an episode of Lost – than almost any other short story.  But Fadiman is unarguably correct in his observation that Bierce’s work, and his dark streak, have kept him alive. 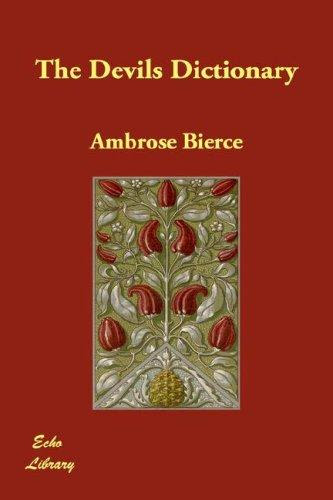 While there is uncertainty as to how Ambrose Bierce met his end, what is certain is that at least one great, albeit brooding, work that he left behind vigorously survives:  The Devil’s Dictionary.   Since 1911 The Devil’s Dictionary, originally titled The Cynic’s Word Book, has never been out of print.  Thanks to the expiring nature of copyrights and the wonders of Project Gutenberg it is also currently available on line and for free.

The Devil’s Dictionary, for those unfamiliar with the work, is comprised of tongue-in-cheek definitions for common English words.  The definitions were written by Bierce during the period from 1881 through 1906, and were originally offered up in his newspaper columns.  They derive from the commonly understood meaning of each of the defined words, but then tilt that meaning on its axis in a manner that reveals a darker underlying truth.  The definitions, therefore, are not unlike paraprosdokia, the subject of a previous article, but they differ in that they are uniformly (not just occasionally) dark, and are unsparingly cynical.

But enough of introductions.  Let’s dive in and examine some prime examples, still relevant after over one hundred years:
Some months back the Washington Post ran a contest in its weekly Style Invitational to come up with additional definitions in the manner of Bierce.  Herewith, the top four entries and winners:
See you in two weeks!

Dale, now you have me trying to come up with a few of these definitions myself. I studied Bierce in college years ago but had forgotten the interesting tale of his apparent demise. Great column!

Glad Ambrose Bierce is there when we need him- which is often, especially in election season.

My contribution to the dictionary:
Health Insurance - a supposed safety net that actually works only if you have no need for it.
Alternative definition: You should have saved more money.

Blog post: a magazine feature article posted on the Internet by a writer who's given up on getting paid for his or her work.

Conservative, n. A Liberal whose child is assaulted.

Liberal, n. A Conservative whose child is charged with the assault.

I like your definitions of liberal and conservative. So true!
Your accordion definition reminded me of one I heard: A gentleman is someone who knows how to play the accoridon but doesn't.

Now, let's see if this comment will be accepted by your "web page owner".

The accordion quote is from Oscar Wilde. It is one that I intend to use in a subsequent article. You are taking the wind out of my sails! :-)

Sorry about that. I thought it was rather funny. I have a friend who plays the accordion, but Ive never heard him play. He's a real gentleman.

Remember, Bierce was a veteran of the Civil War and wrote about it in his fiction. And for definitions he might have done today "BLOGGER: Someone who is unemployed." Present Company Excepted! :) :) :)

Some time ago back on Criminal Brief, I posted a column called "Mencken Modernized", wherein I updated several definitions from H.L. Mencken's imitation of The Devil's Dictionary, "The Jazz Webster", Chapter X of his 1907 A Book of Burlesques. Interested readers may find the column here.

Although cynicism never goes out of style, we should remember that Ambrose Bierce was a man of his time and some of his definitions now appear ignorant and crude rather than clever, e.g., his definition of "Russian": n. A person with a Caucasian body and a Mongolian soul. A Tartar Emetic. Racism is no longer accepted as a sign of wit.

James is correct. In sifting through Bierce's definitions to cull the ones set forth above in the article I came across quite a few that I was not about to include under my own by-line.