The Death Mask of Napoleon, presented to the city of New Orleans by Napoleon's personal physician Dr. Francois Antommarchi in 1834, and put on display in the Cabildo on Jackson Square, went missing for 43 years.

I've viewed the death mask many times in the Cabildo. It is one of three bronze effigies cast from a plaster mold made by Antonmmarchi forty hours after Napoleon's death. The mask in the Cabildo was the first cast from the original mold, the other two are in Paris at the Musée Carnavalet (Musée Historique de la Ville de Paris) and in the Musée de l'Armée (Hotel des Invalides which houses the tomb of Napoleon).

The effigy does not resemble the Napoleon we see in paintings and sculptures. The cheeks are sunken showing high cheekbones, the nose has a distinct curve, its end drooping slightly. The lips are further apart on the left than the right as if the emperor is giving us a slight smile. With the head shaved in order to create the plaster mold, the forehead seems narrow and only part of the ears are shown. The lay of the head reveals a prominent Adam's apple. Such was the first Emperor of France at death at the age of 51. (Napoleon referred to himself as Emperor of the French rather than Emperor of France). The face looks more like Julius Caesar than Napoleon. 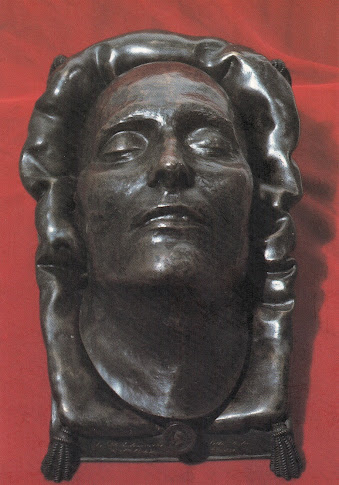 When I first saw it as a kid, I was amazed. First death mask I'd ever seen. More amazing was the story how we almost lost the mask.

Dr. Antommarchi arrived in New Orleans in November, 1834, to great fanfare. He set up a practice as Napoleon's doctor and prospered until leaving in 1838. He joined a wealthy cousin in Cuba and became adept at removing cataracts. He died in Cuba in 1838, a yellow fever victim.

The celebrated death mask was put on immediate display and moved to the new City Hall on Lafayette Square (now called Gallier Hall after its architect James Gallier, Sr.) in 1852. During the Civil War, the New Orleans City Hall was often in upheaval with Confederates occupying it for a year and US forces for the remainder of the war after the Yankees took the city in 1862.

In 1866, former City Treasurer Dr. Adam Giffen, walking along Canal Street, saw Napoleon's Desk Mask in a junk wagon. He was astonished and followed the wagon and bought the mask from the junk dealer. The mask had been thrown out with other trash when City Hall was going through one of many clean-ups after the war. Giffen took the mask home and put it on the table in his library, showing it to family and friends.

When Dr. Giffen died in 1890, the mask was given to the widow of the doctor's son, Robert Giffen. The widow put the mask on display in her home. No one in city government missed the mask and the widow eventually sold it to Captain William G. Raoul, President of the Mexican National Railroad, who took the mask to his home in Altanta, Georgia. When Raoul learned the city of New Orleans was seraching for the mask, he contacted the city and agreed to return the mask for the price he had paid for it plus interest and an inscription about him placed next to the mask when it went back on display. New Orleans Mayor Martin Behrman eagerly agreed to the arrangement and the mask was returned in 1909 and placed in the custody of the Louisiana State Museum, to which the Cabildo is a part.

On August 13, 1902, an out-of-work traveling salesman from Chicago attempted to steal the mask. The theft was prevented by the quick intervention of E. L. Carrol, a Tulane University medical student working as a night watchman at the Cabildo.

On May 11, 1988, the Cabildo was set ablaze by men working on the roof. I happened to drive past it along Decatur Street, saw the Cabildo on fire and felt certain we'd lost the historic building – seat of the Spanish colonial government and site of the Louisiana Purchase ceremony in 1803. The New Orleans Fire Department saved the old building. 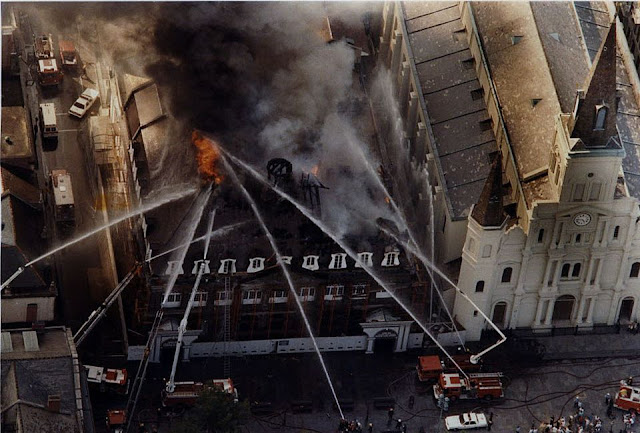 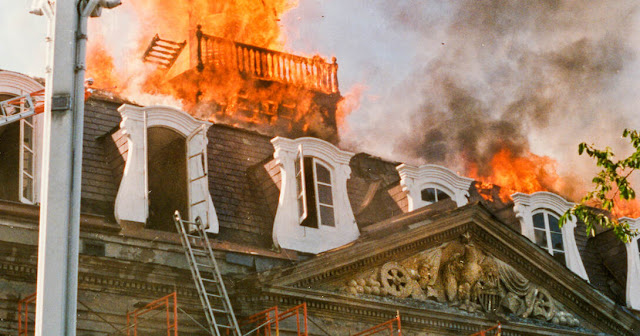 Television crews filmed heroic firefighters battling the blaze and dousing Saint Louis Cathedral next door to keep the oldest cathedral in continuous use in the United States from burning. They also filmed firefighters carrying out art and historical treasures from the Cabildo, including the death mask. As you can see, the fire engulfed the entire roof.

The Cabildo was restored to its original state and the death mask is there on display. Note the three floors. The first floor is of French design, the second Spanish architecture, the third floor and cupola of American architecture. 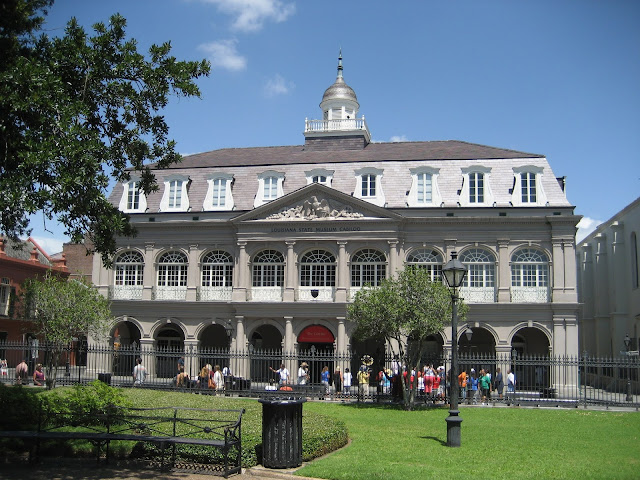 Much of the information in this posting is from the pamphlet DEATH MASK OF NAPOLEON, a publication of the Louisiana State Museum, New Orleans, issued January 15, 1936. Price 25¢. No copyright listed. No author listed.