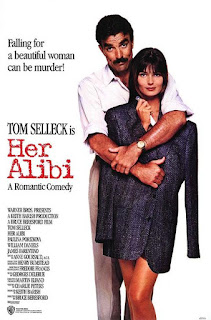 And yet this sort of twaddle gets unfunnily, unironically purchased and published over and over again in fiction that purports to be "realistic." And again, yes, a lot of fiction is "escapist" (some might even say "wish-fullfillment"): a double conceit played to full effect in the Tom Selleck movie Her Alibi (1988), where Selleck, playing a a popular author of unrealistic wish-fulfillment thrillers, actually gets shot in the buttcheek with an arrow. The scene is played realistically (and hilariously) , and the laughs pile up when Selleck, like so many writers, mines the experience for a scene in his current work-in-progress. It's all the funnier when Selleck's literary hero avatar nonchalantly pulls the arrow out his *bicep* all by himself, before going about the business of methodically taking out bad guys.
Check it out. It's hilarious. Maybe all great comedy does arise from pain? Or maybe I enjoy it more than some people because I'm also a writer of the sort of fiction Selleck's character so successfully peddles bad pastiches of? Maybe it is just one big inside joke. You be the judge. I still find that bit really funny, over thirty years later.
All I can say is that if someone managed to put the sort of hurt on me that the combination of my truck and a wet patch of ground after a rainy night did yesterday, I wouldn't be saying, "Go on without me!" Once I could talk again, I'd be focused solely on trying to get the pain to stop.
And speaking of the fall I took yesterday, as it turns out, I got lucky. The muscle and ligament damage turned out to be partial as opposed to total. The difference between these two states of damage is the difference between recuperation/a hip-to-ankle brace/eventual physical therapy, and a surgical reattachment/reconstruction of the injured area.
So it looks like I have a lot of THIS in my near future:
See you in two weeks—and in the meantime, be careful out there!
Posted by DoolinDalton at 01:33