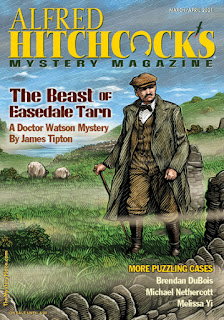 When a hockey player scores three goals in the same game, he is said to have performed "The Hat Trick." There are several myths as to where the term came from, however, it appears that the term was first coined in December 1933 when The Winnipeg Free Press described a hockey game in which Romeo Rivers of the Monarchs scored his third goal when he received a pass from his team mate who had drawn the opposing goalie out of position.

The term has since moved into other sports, referring to a player scoring three times in the same game. If the player happens to score two goals, it's called a "brace," and if he scores three consecutive goals in the same game, without another player scoring in between any two of his goals, that feat is then called "A Natural Hat Trick."

Transposing the above logic into the game of writing for AHMM, I think I can claim the simple version of The Hat Trick. To borrow someone else's phrase, someone a lot more famous than I am: "So, here's the deal."

The Nov/Dec 2020 issue of AHMM published my short story "A Matter of Values." Originally, I intended this Prohibition Era tale about an Irish bootlegger and his vice cop buddy to be a standalone. However, as I mentioned in a previous blog, I am now under pressure to turn the standalone into a series. To date, I have two story starts, "Whiskey Curb" and "On the Pad." Both are based on actual places and/or happenings in NYC during that time period. We'll see if either makes it to the finish line.

The Jan/Feb 2021 issue of AHMM published "A Helping Hand," 8th in my 1660's Underworld series. This story involves a young, orphan, incompetent pickpocket trying to survive in a criminal enclave in Paris during the reign of Louis the Fourteenth, the Sun King. Constantly being hungry, he is often drawn into the schemes of others in hopes of getting something to eat.

The Mar/Apr 2021 issue of AHMM published "St. Paddy's Day," 12th in my Holiday Burglars series. In this one, Yarnell and Beaumont are hired by a woman to steal her husband's body and get it to the funeral home in time for his services the next morning. It seems the deceased's drinking buddies stole the corpse at the wake, bungee-corded it to a refrigerator dollie, stuck a drink in his hand and proceeded to wheel him through all his favorite bars on St. Patrick's Day. Our two protagonists took on the job because the deceased was a fellow burglar, not to mention the fee for doing so.

And, there you have it. I'm considering that writing for Alfred Hitchcock Mystery Magazine as one game, while writing for any different magazine as a separate game. Since I have a story in three consecutive issues of AHMM, I am hereby claiming a Hat Trick in the field of writing mystery short stories.

Hey, in our business of writing short stories, you aren't going to get rich, so you have to find glory where you can.

Now, get out there and write/submit/sell your own short stories and claim your own Hat Tricks.