You might be forgiven thinking Joel Greenberg a low-rent Jeffrey Epstein, possible purveyor of goods and services to the likes of his friend, Congressman Matt Gaetz. Greenberg was supposed to go on trial a couple of weeks ago, now rescheduled in two months (June). Long before he was arrested for numerous crimes, red flags arose.

Development of a Police State

More than county tax departments, Florida’s various Code Enforcement agencies may be the most despised bureaucracies in the Sunshine State. These are the people who fine homeowners $200 a day upon spotting a hole in a porch screen or charge $500 a day for painting one's house the wrong shade. These fines are as typical as they are capricious. Notice these penalties run ‘per day’. Code Enforcement has also charged citizens for hosting religious gatherings in their homes and flying American flags, both successfully challenged in the courts.

These ‘per day’ fines can easily exceed most criminal penalties, even mount beyond the value of the properties they target. One local man has racked up $1.9-million. But at least Code Enforcement can’t send violators to prison.

He’s mocked Code Enforcement, at one time planting a toilet in his yard and another time creating a giant buttocks sculpture. God love him. When ordered to remove junky items from his yard, he obliged and moved them to his roof.

Davis initially spent a year in Florida state prison where he became surprisingly popular. After serving that first term, he’s been back more than once, including a three year stretch for ‘felony littering’– on his own property.

So it’s understandable that as Code Enforcement flexed its muscles, the Florida Association of Code Enforcement (FACE) began to consider themselves junior police officers. They lobbied for the right to carry guns, wear badges, and be addressed like a professional cop. They won the right to be called ‘officer’ and they now wear heavy police-looking badges on their belts or on chains around their necks. However, they couldn’t explain why they needed sidearms whilst writing up unedged lawns and chipped paint.

Your Tax Dollars at Work

After arming his tax collectors, Joel Greenburg considered his new position so ★policey★, he begged a traffic cop who pulled him over for ‘professional courtesy’ and to let him, a fellow officer off the hook.

But wait, there’s more. ‘Officer’ Greenburg stopped at least one woman in traffic by flashing his shiny, new gold badge, accusing her of speeding. Nothing came of her complaint once the lady realized Greenburg wasn’t the real deal. Professional courtesy, see.

Greenburg liked playing pretend in other ways. He directed his department to pay friends who pretended to work for him. He set up pretend companies to further syphon funds from taxpayers. He submitted false claims to receive pandemic relief. He pretended to be other people by stealing taxpayer identities and manufacturing IDs to facilitate trafficking young women.

You may have heard of Bit Coin and crypto-currency. Mr. Greenburg made arrangements to profit from it by setting up his own, money-making crypto-computer within Seminole County’s Tax Department. Crypto-coin is known for gobbling huge amounts of electricity, and he didn’t want that on his personal Duke Energy bill. Unfortunately Greenburg brought 15-watts of intelligence to a 20,000-watt problem. He miswired his server farm, causing it to set the tax office on fire, resulting in thousands of dollars in damage, which of course Mr. Greenburg didn’t pay for. Professional courtesy.

Despite mishaps, Mr. Greenburg liked computers or, more to the point, he liked certain, ah, web sites. One of his favorites was Seeking Arrangement, where “wealthy men and women find the odds in their favor.” Most of us would call that prostitution, but lest we misjudge, here are their words (punctuation added), and yes, that’s a trademark symbol in the first line:

OMG, it’s so beautiful it makes me teary. Of course by ‘relationship’ they mean ƒ—… Well, you know the word. If you can’t achieve love, romance, and sex, you buy it. I can feel empathy for that, but please, don’t call it a relationship.

Joel Greenburg presently faces between fourteen counts and as many as thirty-three. Even after indictment and his release on bail, he continued committing crimes and violations. 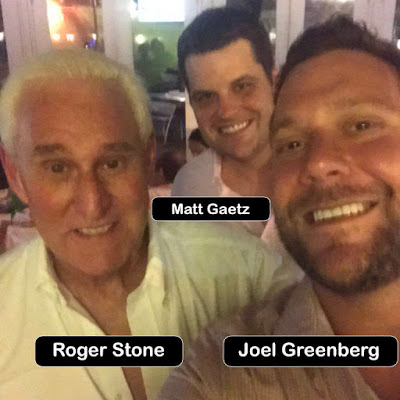 About here Greenburg’s buddy Matt Gaetz enters the picture. The tax collector seems to have been one of Gaetz’s few friends, which may have gone beyond a penchant for underage girls.

Greenburg’s indictment is well-understood, but our sleazy congressman’s story is still developing. We’ll leave it and the involvement of Roger Stone for another time.

And remember, all parties are considered innocent until the rotten miscreants are proven guilty.

† Thanks to Darlene, Sharon, Cate, and Eve for contributions to this article.)