Today marks my inaugural blog with the SleuthSayers. I'm honored to have been asked to pen a periodic contribution to the blog. I know a few of my fellow SleuthSayers, maintain an epistolary relationship with a few more (a fancy way, I'm told, to say that we email on occasion), and read the works of many others. I've enjoyed the thoughtful content of the blog for years. I hope that I may, now and again, contribute something of value to this page.

My name is Mark Thielman. I work as a criminal magistrate in Fort Worth, Texas. When I tell people that I am a magistrate, they usually give me an earnest nod of the head as a sign of understanding. 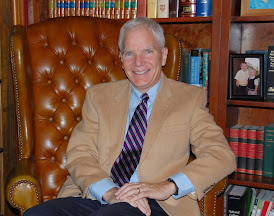 "Magistrate" sounds familiar. Yet like "comptroller" or "aide-de-camp", it is a government job whose definition hangs just past the periphery of people's knowledge. Most don't really know exactly what I do. What the heck is a magistrate?

A fair question. In Texas, the duties of a magistrate are defined in the Code of Criminal Procedure:

It is the duty of a magistrate to preserve the peace within his jurisdiction by the use of all lawful means; to issue all process intended to aid in preventing and suppressing crime; to cause the arrest of offenders by the use of lawful means in order that they may be brought to punishment.

Reading that as I type, it makes my job sound TV worthy: preserving peace, suppressing crime, bringing offenders to punishment. Maybe I don't need a robe, but rather a cape.

The truth of course is a little more mundane. Texas magistrates are a creation of statute. What a magistrate can do in my county varies from those in Dallas or Houston. Putting aside the details, I think of myself as a substitute teacher for the criminal judges of my county. We cover the routine responsibilities of the elected judges, giving them more time for the Solomonic duties the voters expect.

Most of my day is spent meeting the most recently arrested individuals in Tarrant County. When someone in jail turns on the crime spigot, my work begins. A steady line of individuals parade before me. I review arrests, inform defendants of their rights, determine whether they need a court-appointed attorney, and set bail. I work out of a cinderblock room in the basement of the jail; it bears more resemblance to a tornado shelter than the oak-paneled, flag-bedecked courtrooms of television. (Or I did. Since the start of the pandemic I've met my defendants through a closed-circuit television system.)

I encounter a great many interesting people in a day. A few are frequent fliers; we know each other by name. Many are big-eyed newcomers, terrified about their circumstances. Some cry. Many are hungover. I try to speak more slowly to them, since their brains obviously take an extra beat to catch up. Many believe, despite the admonishments about their right to remain silent, that if they just explain themselves one more time, the misunderstanding in which they find themselves will just go away. (Practice tip: Generally it won't.)

Occasionally someone gets angry about the news I'm dispensing. They are, however, the exception. I'm continually surprised at the number of defendants who are polite and respectful. If only you'd acted this way on the streets, I often think, you wouldn't be standing here talking to me now. Of course, they are mostly sober when I see them and that likely helps their impulse control. I afford them as much courtesy as I can. I always try to remember that all of them, even the guy who gave a fake name hoping to beat his parole warrant, are having a bad day. The detention officer and I are the only people in the room who awoke planning to go to jail that day. And we both get to leave at will.

I like to think of myself as a writer with a magistration hobby. I write mostly short stories. The next one will be out in the May/June issue of Alfred Hitchcock Mystery Magazine. I've written historicals and contemporaries, humorous and serious stories, puzzle mysteries and, occasionally a poignant tale of someone for whom life hasn't quite worked out like they planned.

Although I suppose that I will someday, I've never written a story set in magistration court. Magistration is what I do to fill the time between sessions crafting fiction. There is, however, some overlap. Both my writing job and my magistrate hobby require me to sit in my chair and keep typing, even on days when I don't want to.

My crack staff helps me to look smarter at both my jobs. My writing editorial assistant is pictured here. 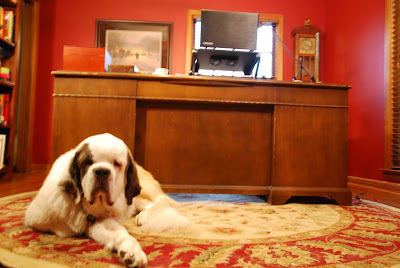 She taught me the important rules for writing, the two commands: "Sit" and, "Stay".  Together we keep trying.