How It Happened In Tennessee: The 19th Amendment

This one has it all: feuds, sudden victories, shock defeats, smoke-filled rooms, betrayal, transcriptionists. And we open to 1920 and a young Jewish woman scouring the East Tennessee mountains. 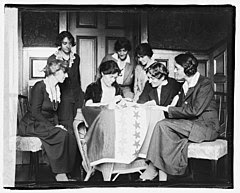 Anita Pollitzer was a Charleston-born photographer and force of nature with a drawl. In her twenty-five years, Pollitzer had already turned the New York art world onto her pal Georgia O’Keefe. Pollitzer's second famous act was unfolding over a country tour rounding up legislator assurance for women's suffrage. She'd had leapt through the National Woman’s Party ranks as a crack organizer, and winning the vote anytime soon had come down to the Tennessee Legislature. Yes, Tennessee. The Woman’s Party, forever cash-strapped, sent Pollitzer to secure the eastern delegation. All of them.

Niota, Tennessee sits in the ridgelines between Knoxville and Chattanooga. In 1920, Niota was the home of Representative Harry Burn, a rising Republican star and relationship banker. Try as she might, Pollitzer couldn't be everywhere. A stop in remote Niota ate through precious time and scarce funds. Fair enough. Pollitzer cornered Burn on the telephone, and when Pollitzer had someone cornered, they knew it. Burn pledged his vote for the Suffs. Pollitzer moved to corner the next guy.

Cut to Nashville and one Edward Bushrod Stahlman, an ex-L&N Railroad exec turned newspaper publisher. Stahlman had forged the afternoon Nashville Banner into a regional conservative powerhouse. In non-unrelated business, he remained the railroads’ go-to lobbyist around these parts. As prickly personalities and successful businessmen will do, he’d made enemies.

Such as Luke Lea, publisher of the rival Tennessean. In 1913, Lea had gone from U.S. Senator to ex-U.S. Senator thanks to Stahlman backing an ouster. Lea had gotten it in his head to investigate the railroads' political influence and possible local corruption. Lea seemed to loathe Stahlman so much that many a morning The Tennessean portrayed Stahlman as a disloyal German, Lea being just back from distinguished service in WWI. Lea held such a grudge against things German that he’d tried– actually tried– and failed a caper to kidnap the exiled Kaiser. Lea ran The Tennessean as a progressive voice that strongly backed– wait for it--popular election of U.S. senators. Also Prohibition and now women’s suffrage. Pretty much whatever Lea was for, Stahlman and The Banner were inclined to be against.

Mind you, Stahlman had backed Tennessee's 1919 partial suffrage bill passed while Lea was off chasing the Kaiser. And Stahlman professed support even for making suffrage universal--until he was against it. A states rights guy, what bothered Stahlman wasn’t women voting per se but Washington mandating that women could vote. It was the principle of thing, see?

Also, there was money to be made. Big Railroad wanted their, ahem, investment in the Legislature protected. Big Liquor feared pro-temperance Suffs who’d already slapped Prohibition on everyone. Big Manufacturing thought women voters would push through dangerous and radical ideas like child labor laws. Well-funded lobbyists organized a fierce--and whiskey-soaked--persuasion campaign, with The Banner as their afternoon voice.

Though not always the loudest voice. The Anti's logic went that, if you’re going to convince women not to push for voting rights, you have to make it appear like most women don’t want voting rights. Enter Josephine Pearson of Monteagle, an Anti writer of scathing editorials and a former college dean installed as President of the Tennessee State Association Opposed to Woman Suffrage. Well-regarded and accomplished, she was the sort of successful career woman her speeches warned America about.

Here came the broadsides. The rough-and-tumble of politics would corrupt womanly virtue. Politics would overtax the female brain and thus shrink the womb. Thus, suffrage doomed motherhood itself and by implication America, hot dogs, apple pie.

Both sides threw everything they had into the War of the Roses. Suffs pinned yellow roses to pledge lapels. The Anti pinned (paper) red ones on their supporters. The swank Hermitage Hotel, a mere plaza away from the Capitol, became ground zero for charm offensives, pay-offs, sex traps, fist fights, death threats, fake telegrams about dying children, and Big Liquor's 24/7 Jack Daniels speakeasy on the eighth floor. It became impossible to find a legislator sober enough to lobby.

The Anti strategy was working, despite a quick loss in the Senate. The doomed womb and states rights arguments provided cover for House members worried that women voting also included black women. Bribes didn’t hurt, either. Suff support collapsed in the House, and Rep. Burn of Niota was among the defectors.

They thought they had it won, Pearson and old Stahlman. By a narrow margin, sure, but they didn't need a blowout. Stahlman himself delivered a seal-the-deal address on the House floor condemning undue influences meddling in Tennessee's business. The Antis had underestimated a few things, though.

One was Anita Pollitzer.

Pollitzer took no for an answer poorly, especially after she’d been promised a yes. Pollitzer and the Anti leaders stalked Capitol Hill and the Hermitage Hotel and anywhere a legislator might try to hide. Lost pledges were blistered with appeals to better natures and epic guilt trips. Rep. Burn got a full dose of Pollitzer's drawled fire and was left stammering in her wake.

Here, famously, motherhood actually did step in. A conflicted Burn was on the House floor during the make-or-break session when he received the most mom-like letter ever written from his mother Febb back in Niota. Febb, a diehard Suff, softened her boy up for a few paragraphs and then sank the maternal dagger over his Anti pledge. In dramatic style, Burn re-switched sides on the spot. Boom, Suffs cheered from the gallery, Antis shouted for blood or at least recounts.

Well, Burn had to beat it quick out a Capitol window. Later that night, the Antis tracked Burn down at the Hermitage Hotel. Top Anti strategists had mapped out a double-secret plan to torpedo the Amendment by legislative maneuvering. There would be the usual rallies and propaganda and intimidation, but the showpiece of the brainstorm went like this: Blackmail the snot out of Burn. Once he re-re-switched his vote, the Antis would yet win the day.

And the Antis had proof. Proof!

Witness affidavits claimed that shortly before the dastardly vote switch, Burn had been hauled off into a cloakroom and given ten grand to go Suff. Recant, the Antis warned Burn, or tomorrow afternoon Stahlman and The Banner run this nugget and end that promising career. Never mind that Burn hadn't been hauled anywhere. He’d been in full view agonizing over Febb's letter. That wasn't the Anti's biggest problem.

The stenographer knew dirty pool when she heard it. She recorded not only their statements but also how operatives coached the sort-of-witnesses into framing Burn. And the stenographer turned the whole thing over to Luke Lea at The Tennessean. Stahlman would’ve been prepping for his crushing afternoon edition when someone drew the short straw and slid over The Tennessean’s morning scoop blowing up the blackmail scheme.

That, friends, was how Tennessee came around to seal the Nineteenth Amendment of the U.S. Constitution. Like I said, this one had it all, including– in the end– a win for justice.