The Joy of Monotasking


by Joseph D'Agnese
When my wife and I hang out in the backyard at the end of a day, inevitably our conversation turns to productivity. How can we get more things done without driving ourselves crazy?
Over the years, we’ve devoured a number of books that promise to help their readers crack this nut. Two of our favorites are books that have, in a certain sense, sparked mini-movements. Getting Things Done, by David Allen, inspired legions of developers to create software that embodies Allen’s principles: religiously collect all your to-dos in one place so you can routinely process things in one go; if a task can be done in two minutes or less, freaking do it now and don’t waste time adding it your to-do list!
Deep Work, by Cal Newport, is more of a manifesto. He argues that human beings do their best work when they think deeply about a project, and ruthlessly keep their workplace and time free from distractions. His official definition:

Deep Work: Professional activities performed in a state of distraction-free concentration that push your cognitive capabilities to their limit. These efforts create new value, improve your skill, and are hard to replicate.

The challenge facing any professional today, he says, is fighting to accomplish this deep work. It’s bad enough that we all have to contend with mindless admin or household tasks, but now we’re bombarded with ceaseless emails, the promise of “free promotion” if only we’ll become slaves to social media, and the fatuous lie that is multitasking.
In contrast, Newport, an associate professor of computer science at Georgetown University, famously responds only to emails he thinks are worth it. (We know this from personal experience. Denise and I have tried to lure him into doing an interview. No response.)
He did, however, talk to a reporter for the New York Times. It’s a wonderful chat, archived here. In trying to explain why ceaseless interruptions by social media and email are making us miserable, he says,

“…the culprit here is network switching. Human brains take a long time to switch. If you’re going to put your target of attention on one thing and then switch it to a new target, that takes a while, right?”

And later he adds:

“And then if you wrench your attention back to what you were trying to do, it creates this whole pile-up in your brain, which we experience as a loss of cognitive function. We also feel frustrated. We feel tired. We feel anxious. Because the human brain can’t do it.”

I greatly enjoy Deep Work’s opening anecdote. Newport describes how Carl Jung got some of his major books and academic papers written. Jung built a Spartan, two-story stone tower in Bollingen, in the woods overlooking Lake Zurich, and used it to escape from the obligations of clinical practice, academic lectures, and the temptations of Zurich’s coffeehouse scene. (He later enlarged the house, but you can see the original design here.) He conceived that tower not as a vacation home, but a place to which he escaped to get work done. Alone, away from others, Jung walked in the woods, thought deeply, and managed to get a lot of writing done. The ideas born at Bollingen are today regarded as the strongest counter-arguments to Freudianism.
If you want to write, you need to think. Sometimes deeply. Even if what you’re writing is playful. I have heard of some people who can write while playing classical music, or jazz, or whatever, in the background. I’ve heard of a mystery writer—was it Stanley Ellin or Robert L. Fish?—who could bang away happily on his typewriter while his kids were inches away, playing in their pool. I believe all these stories, but I can’t say I necessarily admire such skills.
Some of the best advice on writing is sitting on the windowsill facing Denise’s desk. She describes them as a “A list of do’s, a list of don’ts.” 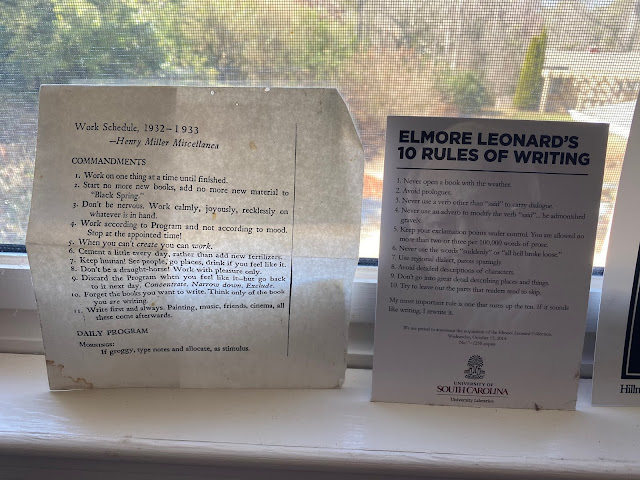 One, as you can see, is Elmore Leonard’s famous 10 Rules of Writing, which I don’t need to go into, because it’s sparked tons of other columns in the mystery world. (One of my favorite follow-up essays half-joked that Leonard probably had forgotten he had a deadline for a piece for the New York Times, so he sat down the day the piece was due, and quickly banged out those 10 rules, machine-gun-reporter-style, never expecting that so many other writers would later obsess about them.)
The other little list Denise treasures is culled from the work of Henry Miller. It’s a work schedule Miller hammered out in the 1930s to help him get one particular book done. I’ve made the image big so you can read his rules, but you can find the complete list at numerous websites, like this one. 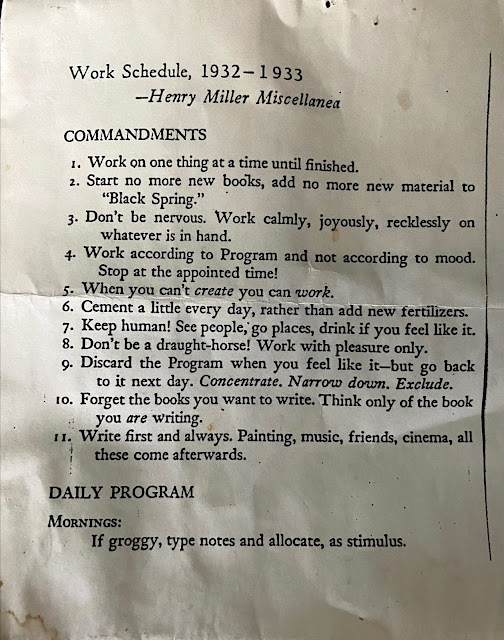 It’s worth thinking about how Miller’s approach might apply to your own work. If you want to get a task or specific project done, you work on it until completion. You resist the urge to do all the other Bright Shiny Ideas that are bouncing around your brain, and which always seem so much more exciting and promising than the piece of crap you’re trying to write right now.
And yes, Miller’s rules may not apply to the one big project you’re working on, nor are they for every writer. This is, after all, Miller’s list. But still, when I read his rules, I feel seen: Work on one thing at a time until finished. Start no more new books. Work joyously. Go out and see friends. (Boy, so I miss that in the long malaise that is 2020-21.) But also: when you cannot create you can still work. Yes, yes, yes! Man, is he right about all of that.
I don’t know if Professor Newport has ever seen this list, but I think he would approve. At the end of Newport’s interview with the Times, he’s asked for book recommendations, and he tosses off a few, observing that by necessity literary work is the epitome of deep work:

“there’s really no way to produce real insight in writing at that level without actually just having the ability to be alone with your own thoughts and observing the world, and just letting that percolate and letting that move, and trying to craft and move and work with it.”

I like that. Also, for some reason, writing this post reminded me of our man Curly, played by Jack Palance, in the 1991 movie, City Slickers. Remember his genius piece of advice?
I recently watched another sort of clip; an interview with one of John Steinbeck’s sons. Thomas Steinbeck said his father would take time every morning to sharpen 24 pencils because he hated the distraction of having to stop his work and sharpen them in the middle of whatever he was working on. I suspect that anyone who’s ever written knows the real reason Steinbeck sharpened those pencils. He was procrastinating, because sometimes writing is terrifying, especially if you have struggled with depression and self-doubt, as Steinbeck did.
Nevertheless, I went out that day and ordered a box of 24 pencils. They’re (relatively) local-to-me pencils, made by the good folks at the Musgrave Pencil Company, in Shelbyville, Tennessee. They’re made of cedar, come in a fragrant cedar box, and smell marvelous when you take the time to sharpen them.
So I guess my advice this week is to take the advice of other writers and thinkers. Stay safe. Work joyously and recklessly. Work on one thing that freaking matters to you right now. Heaven help you if you start a novel or story with the weather! And take the time to smell the pencils. 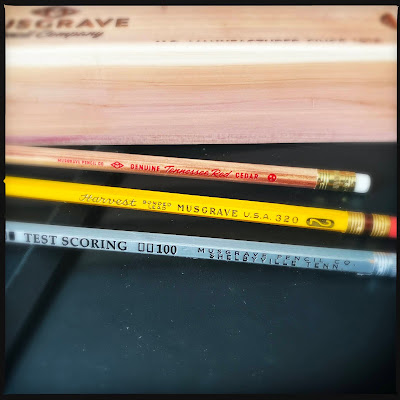