by DoolinDalton
Two weeks ago I wrote about rum runners and the ships that anchored out into international waters anddelivered illegally imported booze to them. This week I've decided to move ashore and talk about the guys who offloaded the hootch and ran the considerable risks (at equally considerable profit) of delivering to a thirsty nation.

And one guy in particular. Ex-cop and "gentleman bootlegger" Roy Olmstead.

Born and raised in Nebraska, Olmstead moved to Seattle in 1904 (aged 18) and worked in a shipyard before joining the Seattle Police three years later, in 1907. Within ten years, Olmstead was a lieutenant. That lasted for three years, because once Prohibition kicked in Olmstead realized the massive amount of money to be made supplying illegal liquor to the masses, and began a side business running hootch.

And this very week in March of 1920, Olmstead was nearly caught in a raid. He escaped, but was recognized by one of his fellow officers, and was arrested at his home the next morning. The whole escapade cost Olmstead a $500 fine and his job.

Rather than be discouraged, Olmstead threw himself whole-heartedly into the illegal liquor distribution business, and over the next five years became one of the most successful 'leggers in America. By 1925 his operation was one of the biggest employers in the Puget Sound region, had started up his own successful radio station (which his wife largely ran out of their home, and which he used to help get coded messages to his contacts in the liquor business.).

He delivered to such infamous speakeasies as the "Bucket of Blood" (actual name: the Hong Kong Chinese Society). He put cops (LOTS of them) on his payroll to act as lookouts for his operations. He eventually had his own boat, the "Zambesie," which he sent to pick up shipments in the Haro Strait.

Olmstead always seemed able to either stay one step ahead of or buy off both the feds and local law enforcement. This included the Canadian authorities, who taxed liquor bound for the States at a higher rate than booze bound for places like Mexico (after all, it was only illegal to bring liquor into the U.S. In Canada there was no law against exporting to the States.). So Olmstead would hire ships in Vancouver, fill them to the gunwales with booze, forge papers saying they were bound for Mexico, then have them sailed down into Puget Sound and offloaded with no one the wiser.

And he managed this without resorting to the varieties of violence so common everywhere else in America that Prohibition ran up against organized crime only too willing to break legs to get what it wanted. And no prostitution, racketeering, no other illegal activities. Just running booze. The best booze money could buy. Olmstead didn't cut his liquor with furniture polish. Only the best for his customers.

The Seattle Police tapped his phone. In 1925 Olmstead got hauled before a federal grand jury on two counts of conspiracy to violate the Prohibition Act. He was convicted, sentenced to four years in prison, appealed all the way to the Supreme Court (Olmstead v. United States), claiming that the wiretap evidence was inadmissible. (The Supreme Court disagreed.) 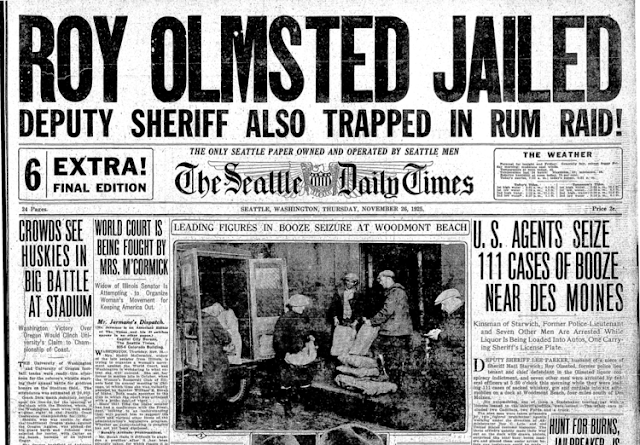 Olmstead went to jail at McNeil Island in 1927, once his appeals had run their course. He was a model prisoner, served his entire four years, converted to Christian Science and even testified on the government's behalf on a number of subsequent federal cases.

He learned carpentry in prison and once he was released in 1931, he began volunteering in a number of prison outreach programs, focusing specifically on dealing with alcoholism. He taught Sunday school. For the remaining thirty-six years of his life (he died aged 79 in 1966), Olmstead remained popular with the community, never losing the famous charm that had stood him in such good stead while he was the so-called "King of the Bootleggers."

Posted by DoolinDalton at 03:30