This Time Next Year

Not my usual line of country, nor your usual memoir, Jackie Winspear’s This Time Next Year We’ll Be Laughing. 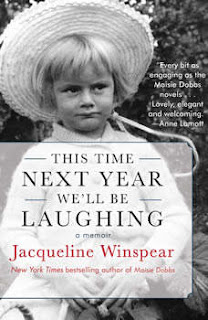 If you know the Maisie Dobbs books (number sixteen, The Consequences of Fear, comes out in March) or the engagingly sly Care and Management of Lies, you might think you’ve made Jacqueline Winspear’s acquaintance, but you don’t know the half of it. We imagine we’ll learn something about a writer, or the engines of her imagination, if we’re invited inside her life.

Nothing is a one-on-one equivalency, not John LeCarre’s rascally father Ronnie, or whether Anne Hathaway cheated on Shakespeare with his brother, but we nod with a certain familiarity when Jackie tells us her grand-dad was never able to adjust to loud noises after he came back from the trenches: she was a high-energy kid, and bouncing off the furniture needed less of same.

This is one of those intersections of biography and the imagined that stands out in This Time Next Year. Maisie is herself a veteran of the Great War, and her generation is shadowed by loss. For a writer, this can be a second cousin once removed, the shadows inhabited with someone just off-stage, concealments. We observe an absence, what got left out of the story. It’s a narrative device.

Jackie cheerfully confounds this. It’s not that the story is relentlessly sunny, far from it. The voice is one of speculation, and doubt, and a kind of fey suspension of disbelief, but grounded in exactly remembered detail. The dress. The overturned pot of scalding water. The smell of hops. Nothing is sentimental; everything is vivid.

The trick, if I can use that word, is that Jackie reimagines her childhood. She does something that I think is extraordinarily difficult, from a technical point of view. She gives you the child’s perspective. The girl of six. And then she casts an eye back. The girl of six might well be more wary and less forgiving, but the key is that the grown woman sympathizes with the importance of the event, then. This pulled focus is riveting.

Jackie’s mom, Joyce, looms large. “‘Look at the time,’ she’d say, which was a bit pointless, because the black Bakelite clock on the mantelpiece above the stove, the one in the shape of the grand Grecian palace that came from Nanny, never kept good time, though she had the watch Dad had bought for her when they were engaged. That was the watch that, if it stopped working, she’d take it off and, grasping it by the strap would slap it across the table a couple of times, look at the dial, hold it to her ear and then say, ‘There, that did it.’ Slapping the TV, slapping the watch, slapping the radio – which we called a wireless – if something wasn’t working properly, she would always sort it out with a sharp slap. It was a method she also employed when her children didn’t seem to work properly.”

You get the idea. The ironies. The astringency. It’s very affectionate, though. She seems to lay all her cards on the table, but much is withheld. The silences are quite surprisingly loud.

Late-breaking. This Time Next Year We’ll Be Laughing is up for an Edgar, best Critical/Biographical.