Note: I reivsed this column on February 27th, because I needed to add the story by Thomas Perry, which appeared in a magazine with a 2020 date which I didn't receive until last week.

I had better explain that title before you send for the nice folks with the strait jackets.  2020 was better than 2019 only in the sense that more stories made my Year's Best list.  Last year, my eleventh, 12 stories made the list.  This year it's 17, a 41% increase.  Am I just feeling generous as the world dips into chaos?  Who knows?

For the second year in a row the big winner was Akashic Press, with three stories.  They send me their anthologies for free, by the way.  Following with two were Alfred Hitchcock Mystery Magazine, Ellery Queen Mystery Magazine, LB Productions, Mystery Writers of American, and Superior Shores Press.

That last one requires a bit of explanation.  Publisher Judy Penz Sheluk asked if I would read an advance copy of Heartbreaks and Half-Truths and give it a blurb if I thought it worthy.  I did so and was happy to write said blurb but, since I read the stories long before the book came out, I didn't feel I could list one as my Story of the Week.  Therefore this is the first time since I started reviewing at Little Big Crimes that tales make the year's best list without appearing there first.

Eleven stories are by men; six by women.  Five are humorous; four are historical; and two have fantasy elements.

The narrator is the only child of Tommy, a former navy man turned plumber. The old man's dementia is turning him violent, profane, and racist  On Veterans Day there is a violent confrontation with tragic consequences.  Some stunning surprises follow. 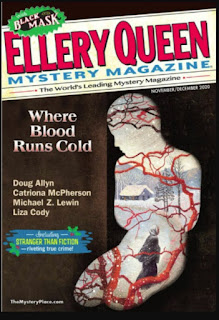 Shareen Manasseh is  a Jewish woman whose family came to Britain from India.  She joined the police force and, without much training, was assigned to infiltrate the climate change activists - she calls them rebels.  Her work her rethinking her allegiance.  Did she become a cop to get "black-and-white certainty" or because it was better "to be with the bullies than against them?"

Here, lemme show you something you've never seen before.  The nameless narrator has film of an actor called "J. Cecil Revell, the Million Dollar Profile," being smashed to death by a grumpy elephant while filming a very bad serial.  It's a charming tale of villainy, revenge, and, of course, elephants. 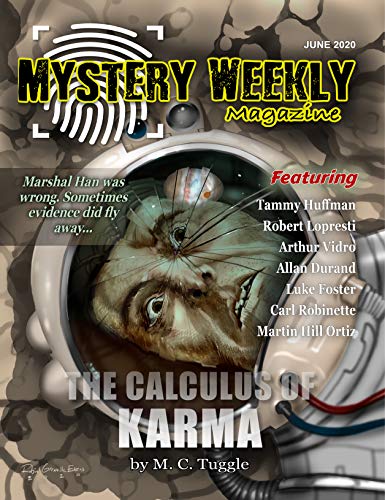 The narrator  is an investigative journalist, covering true crime for TV news shows.  On a flight from Los Angeles he suddenly realizes that the man he is sitting next to is the unknown serial killer the country's cops have been looking for.  And since he has "the world's worst poker face," the killer immediately knows he knows...

Goon #4 (his mama named him Blake) is an ex-military thug, now specializing in high-risk assignments.  Having made enough money to retire he decides to go to college and winds up, more or less by accident, in a class on radio performing.  He has some abilities there, it turns out, but more important is the attitude he brings from his previous profession. 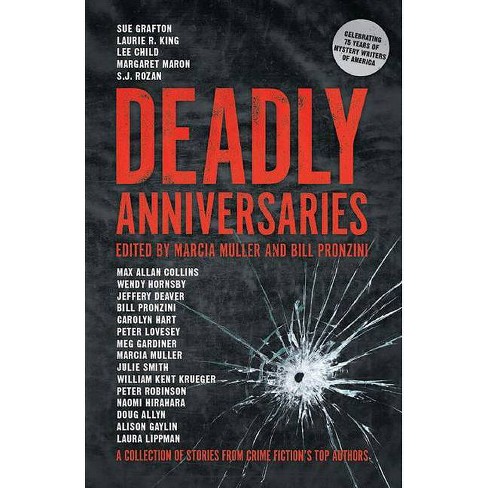 Lucy Burgess has reason to think her hubby is planning to get rid of her.  So she plans a preemptive strike, so to speak.  A lucky mistake puts her in touch with a hit man, and this fellow's way with words is a good deal of the charm of the story.

"Keeping my remarks entirely famatory, every matrimonial association is defeasible, am I right?  ...So what I hear you saying is that you and him are engaged in a parcenary relationship of which you'd like to see his participation shifted to the terminus."

Alan Peterson is a banker, and son of the wealthiest man in a small East Texas town.  The story opens with him running into Beulah's diner in a panic because his beautiful wife TeriLyn has disappeared.

But things don't seem to add up.  She's only been gone a few hours.  And isn't Alan supposed to be out of town?  And why is he claiming she has been having mental problems?

Daniel McLaren, an aging West Virginian rumrunner, is happy working as a messenger in New York City, but when he gets beaten and robbed of a half-million dollar package the cops decide that the ex-convict is obviously guilty - or at least convenient to blame.

Fortunately McLaren has a buddy in the city, a fellow native of the Mountain State named Clayton Guthrie.  And Guthrie is a private eye.  Together they start to unravel a complicated fraud scheme that is going badly wrong, with possibly deadly consequences.

This is McCormick's third appearance here.  It is 1939 and Stalin and Hitler are playing footsie.  As part of their nice-making the Soviet Union and Nazi Germany are exchanging prisoners.

Moller is a German-born Communist.  He has lived in the USSR since its origin but is now  being shipped back to his homeland in exchange for some unfortunate Russian the NKVD wants to get their hands on.  He knows that the vehicle he is about to board "might as well be my funeral train."  But there are plots within plots  and an unlikely ally might  help him out.

This is the second appearance here by Warren Moore.  It ranges between the amusing and startling.

Roger  possesses a newly minted PhD. in medieval English.  He is desperate for work in a crowded  market but he has a plan to avoid teaching at "the Swamp County School of Mortuary Science and Transmission Repair,"

Oltvanji, Oto, "Underneath it all Runs the River of Sadness,"  in Belgrade Noir, edited by  Milorad Ivanovic, Akashic Press, 2020.

Ranko and Kozma are neighbors and old friends.  Kozma is the troublemaker.  As a cop he did little but paperwork and now, in retirement, he is desperate to actually solve a crime for once.  His attempts to find villainy where there may be none has gotten him into hot water with the police and the neighborhood.

But now, just maybe, he could be onto something.  There's a man on the fourth floor who keeps bringing young women to his apartment.  Nothing wrong with that, except they never come out...

Katerina is a teenager leading a miserable life in Moscow with no hint of a better future.  Then her best friend escapes to the United States and Katerina, a very resourceful girl, arranges to go as well.

Naive as she is, she does not realize why a Russian oligarch ("He's like a king,") would be willing to help a beautiful young girl come to California.  He sends a different man  to her apartment every night and Katerina develops a wide assortment of tricks and games to keep them out of her bed.  Does this begin to sound familiar?  Are you perhaps humming a few bars of Scheherazade?

The thousand injuries of Richard Feynman I had borne as best I could. But when he ventured upon insult, I vowed revenge.

It is World War II.  The Manhattan Project is toiling away in New Mexico and Thurston has taken a deep grudge against his fellow physicist.  Read draws details from Feynman's real life into the fictional  plot which is, of course, modeled on Poe's.

This is the third appearance here by my friend S.J. Rozan and the second by the formidable Chin Yong-Yun, mother of  Rozan's private eye Lydia Chin, and quite a character herself.  She notices that Chu Cai, the son of a friend, seems unhappy, even though he has just gotten engaged.  She cleverly arranges for him to come to her apartment to tell his problem to Lydia -- who, alas, is not there.  Perhaps, Mrs. Chin says, she can do the groundwork, although she is not quite sure what ground has to do with the detection business... 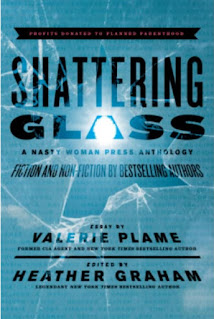 Before she even spoke she knew her body was gone. It had been a struggle, losing it.

At first I thought the protagonist was a ghost, but no, she is a person in trauma experiencing, as some people do in such a situation, the sensation of being outside her own body. In fact, she was drugged and is being raped.  This story is so much about style that I was not expecting the very clever ending.

My friend Ken Wishnia has  retold a story from the Book of Judges.  He does a lovely job of showing the Hebrews at war with an enemy who has superior technology. Ya'el  commits the crime (?) which is the centerpiece of our story.  The main thing Wishnia adds to the Bible tale is giving her a motive.  In fact, he offers two, one of which feels very modern without being anachronistic.