The Call of the Wild

I was sorting through some fairly old emails and came across an exchange that I want to share today.  But to appreciate it, some backstory:

Back in 1992, a young man named Chris McCandless died in an abandoned bus in Alaska.  His body wasn't found for some time.  Apparently he had starved to death, although have been disputes about that.  McCandless, for a while, became a kind of folk hero - a young man who left his family and went roaming around the country, ending up in Alaska, in an attempt to find an authentic life and to test himself against the wilderness. The last person to see him alive, a local electrician named Jim Gallien, gave him a ride to Fairbanks, and later said he had been seriously concerned about the safety of McCandless (going by the name "Alex") because the young man had a light pack, minimal equipment, meager rations, and obvious lack of experience. He offered to help McCandless with equipment and supplies, but McCandless refused.

NOTE:  This does not surprise me in the least. When young men go out to prove themselves against the wilderness, the more hardship = better proof. The fact that the wilderness is practically littered with the bodies of young adventurers is irrelevant because, of course, it isn't going to happen to them.

Outdoor author Jon Krakauer wrote Into the Wild, which made McCandless internationally famous.  I was one of the millions who read it.  Up here in South Dakota it was hugely popular because many people remembered McCandless from his time working in Carthage, SD.  He would come into Madison to drink a few beers upon occasion, and read at the library. 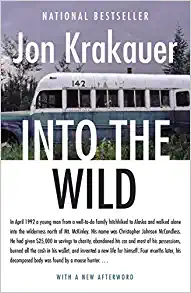 Krakauer decided that McCandless might have starved to death one of two ways:

Rabbit starvation - where the person depends too much on lean game and not much of it, because that's all they can find.  No carbs, no fats will kill you.

Poisoning by wild plant seeds - apparently the seeds of the wild potato are poisonous, and can paralyze and kill you.  Remember that if you ever go harvesting in the wild.

In the aftermath of the article in Outside and then the book, the opinion range of McCandless was wide:

When you consider McCandless from my perspective, you quickly see that what he did wasn't even particularly daring, just stupid, tragic, and inconsiderate. First off, he spent very little time learning how to actually live in the wild. He arrived at the Stampede Trail without even a map of the area. If he [had] had a good map he could have walked out of his predicament [...] Essentially, Chris McCandless committed suicide.[42]

Ken Ilgunas, also an Alaskan Park Ranger and the author of The McCandless Mecca,[43] writes:

Before I go any further, I should say that Pete is a really good guy [...] But with that said, I think Pete is very, very wrong. [...] Because I am in the unique position as both an Alaskan park ranger [...] I feel I can speak with some authority on the subject. [...] McCandless, of course, did not commit suicide. He starved to death, accidentally poisoned himself, or a combination of the two.[44]

Sherry Simpson, writing in the Anchorage Press, described her trip to the bus with a friend, and their reaction upon reading the comments that tourists had left lauding McCandless as an insightful, Thoreau-like figure:

Among my friends and acquaintances, the story of Christopher McCandless makes great after-dinner conversation. Much of the time I agree with the "he had a death wish" camp because I don't know how else to reconcile what we know of his ordeal. Now and then I venture into the "what a dumbshit" territory, tempered by brief alliances with the "he was just another romantic boy on an all-American quest" partisans. Mostly I'm puzzled by the way he's emerged as a hero.[45]

- (All of the above from Wikipedia)

Many years later, in 2007, two movies came out about McCandless.  The first, and most famous, is Sean Penn's Into the Wild, which follows Krakauer's book pretty closely.  The second is Ron Lamothe's documentary The Call of the Wild.  Lamothe came up with some new information:

(1) Later findings that contradict Krakauer's book and Penn's film that McCandless was not poisoned by wild potato seeds as Krakauer had suspected, and that such poisoning had been disproved by toxicology reports.

(2) Also, Lamothe suspected that McCandless had an arm or shoulder injury not shown in the famous self-portrait photo by the bus, in which McCandless' shirt sleeve has the appearance of being empty. Lamothe believes, based on McCandless' S.O.S. note, that McCandless had injured his arm or dislocated his shoulder, which prevented his escape and his food gathering.

(3) McCandless did not burn up all his documents and cash, because they were all in a hidden pocket in McCandless' backpack.[1]

Now here's where I come in.  I watched that documentary, and the main thing that struck me was that the backpack had been discovered - and kept (!) - by a man named Will Forsberg.  And - instead of turning them over to the Alaska police or the McCandless family or even show them to Jon Krakauer - he kept them until Mr. Lamothe showed up.  This instantly made me think - what gives?  Lamothe and Forsberg claimed that the State Troopers missed seeing the backpack, but I don't believe it.  Especially when Forsberg also said that he believed that McCandless was the man who vandalized his cabin.  Having that kind of mind, I thought, well, if that's so, taking McCandless' backpack might have been a form of payback.  And, how do I put this delicately? - what if McCandless was not dead yet when he took it?  And McCandless' shoulder got injured?  (See Trouble Magnet)

I actually wrote to Mr. Lamothe about all of this, and he replied that Forsberg tried to get a reliable address for the McCandlesses, but never did; that he didn't find the wallet in the backpack until years after he grabbed the backpack; that grabbing the backpack was "following longtime Alaskan backcountry tradition"; and he thought my theory was "highly implausible".

Being stubborn, I wrote back,

Thank you so much for your response. I'm sure that my "modest proposal" does sound highly implausible except to people like me - I have to warn you I've worked in the judicial system for years, and I have, sadly, learned that little is as implausible as it sounds.
While I understand longtime Alaskan backcountry tradition (it's the same in any wilderness setting, really, i.e., finders keepers, under infinitely nobler names), my mind still boggles at two points:
(1) that the state troopers missed the backpack when they arrived on the scene. When there's a dead body involved, 99.999% of the time the officials take with them anything that might even be remotely related to it; and
(2) once Forsberg realized that it must have been McCandless' backpack, he didn't turn it over to the state police. After all, the story broke fairly quickly, and even before Krakauer's book, the search for identification was publicized. (Of course, I do know some back-country types up here that would refuse to turn over anything to any law enforcement types, no matter how important - just on principle; and other aspects of that type of mentality, which I know fairly well, is, in turn, what led me to the highly implausible theorizations.)
Nor do I, frankly, believe it took him years to find the wallet in its secret pocket, which didn't look that secret on camera. (Besides, the first thing you do with a new piece of gear is check it out pretty thoroughly, from curiosity alone...)
The whole thing is pretty interesting. I do believe Chris McCandless starved to death, and, in the long run, it probably doesn't matter whether he had an injury or not. Contrary to the fervent belief of many a dreaming young man in search of glory, nature doesn't give a s*** about your purity or your aspirations, only if you've got the knowledge, ability, skills, and sheer determination to survive. And even then she'll kill you if you're not extremely lucky.

So what do you think?  How implausible is it?