I first heard about Black Cat Mystery Magazine when everyone else did, when it was announced in 2017. It started out with John Betancourt and Carla Coupe as co-editors, and quickly became a respected player in the mystery short story community. Last year Carla retired from the magazine and my fellow SleuthSayer Michael Bracken came on board as editor, and BCMM has continued to thrive. Every issue features new shorts by beginning and veteran writers alike.

I've been posting a lot about mystery markets lately (there aren't a great many of them), so today I decided to revisit the stories I've had in BCMM. Here they are, in order: 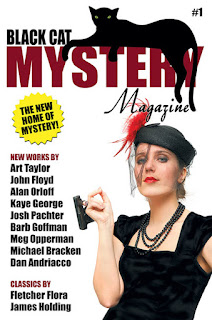 "Rooster Creek," Issue #1 -- This was a fairly long story, close to 7600 words and a dozen scenes, and was fun to write mostly because of the extra-quirky characters. It was part crime story, part love story, part Western, and one of those "framed" stories that starts in the present, goes back to the past to tell most of the tale, and ends up in the present again.

"Two in the Bush," Issue #2 -- A story more different than any other I've written for BCMM--and the shortest, at 2300 words. It had only two human characters and a parrot, and included only four scenes, two of which are set at a local zoo. Also the craziest ending of any of my Black Cat stories.

"Diversions," Issue #3 -- This story was almost entirely dialogue, around 4000 words, and even though it was one long scene with one setting--the back room of a house that served as an interim jail--it probably contained more plot twists than any of my other BCMM stories. Genrewise, it was a Western mystery, with square-jawed lawmen, tough women, and weasely bad guys, and was a LOT of fun to write. (Dialogue always is.)

"Rhonda and Clyde," Issue #5 -- "R&C" was another long story, at 7700 words, and another that had many twists and reversals, mainly because of its many back-and-forth character-POV switches throughout. This story wound up being selected by Otto Penzler and C.J. Box for inclusion in Best American Mystery Stories 2020, and I used it as a topic for discussion in a behind-the-scenes-of-the-story SleuthSayers column last year.

"Mustang Sally," Issue #7 -- My first private-eye story at BCMM, written because new editor and old friend Michael Bracken announced #7 would be a Special PI Issue. The story was 3200 words and definitely lighthearted, its only crime being an off-screen jewelry-store heist. This was also my only first-person BCMM story, and was the first in a planned series featuring PI Tom Langford and his longtime girlfriend Debra Jo Wells. I just finished writing the second installment, which might or might not ever be published (you know that feeling?).

"The Big Picture," Issue #8 -- I like stories whose titles have double meanings. This was one of those, and at 7800 words it was my longest so far at BCMM. It had a complicated plot with a big cast of characters and several late-in-the-story reversals, and some of the details required a bit more research than I usually have to do.

"The Jericho Train," issue number yet to be announced -- A 4100-word story set in southeast Arizona, and my first at BCMM to involve the planned murder of a spouse. It features an oil baron, his henchman, a bomb, and several women who are always (as in real life) smarter than the men. 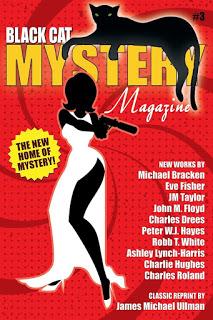 What are the takeaways here, for a writer?

Well, we all know the best way to learn what a particular magazine likes to publish is to read the issues, all of them, if possible, and all the way through. (In BCMM's case that kind of homework is a pleasure, not a chore.) If there are any things to be learned from my own stories at the magazine, I've tried to include them in the following list:

1. All seven of my BCMM stories have plot twists. Some have more than one, and a couple of them have four or five.

4. All are written in past tense.

6. Only one of the seven has a non-linear timeline.

8. Two of the stories have historical settings, five are present-day.

9. None of them are reprints, per BCMM's guidelines.

10. Three include a lot of violence, the other four not so much.

11. All of the stories except one have multiple scenes. The longest has sixteen.

12. The crimes involved are robbery, burglary, jailbreak, drug trafficking, tax fraud, witness intimidation (obstruction of justice), and murder. Sometimes more than one of these per story.

13. None of the seven stories contain any otherworldly or supernatural elements.

NOTE 1: As Michael reminded me the other day, any analysis of past stories in a magazine (to identify preferences and help you decide what to put in your own stories) should include any past changes of editorship. BCMM's Issue #7 was the first to include stories Michael selected, Issue #8 was the last to include stories Carla selected, and future issues will contain stories selected by both Michael and John (John picks all the classic reprints). If you choose to submit to BCMM, be sure to study their current guidelines here.

NOTE 2: Remember, stories in BCMM are noticed and considered for best-of anthologies (!).

The biggest takeaway for me, about Black Cat Mystery Magazine, is that John and Carla and Michael have been extremely professional and kind to me in all our dealings. I'm proud to have been a small part of the magazine, and I thank them all once again. 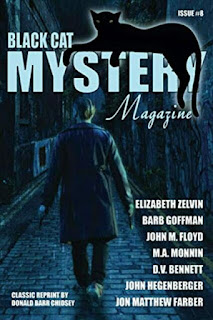