Years from now, when the good movie versions and bad movie versions are made, when the true crime shows have examined witnesses and motives, we’ll have a fuller picture of Nashville’s Christmas Day bombing. As your man in Nashville, I’ll reflect on the incident now. I think I should.

No apartment residents died, no cops or other first responders. The injured will heal. That’s a blessing. The bomber died, and I don’t cheer that. I don’t cheer what haunts anyone struggling with behavioral health issues. But I won’t be working up unconditional sympathy for bombers any time soon.

Full disclosure: I live in Franklin, twenty-ish minutes south with no traffic. I was nowhere near the explosion. You’ll hear people say they heard it a county away. They didn’t. I didn’t. Not one friend who lives downtown suffered more than a boom and a scare. No damage to me or mine. Nashville's damage, though, is real. It could’ve been horrific.

Early news reports called the bombing site “a residential block off downtown” or “on the fringe of the entertainment district.” The hell it is. Second Avenue--Market Street before 1904--has always been at Nashville’s core. That Cumberland riverport vibe still hangs in the air. The old warehouses and trader shops are today’s clubs and restaurants and tourist traps stores. At a peak time, hundreds of people would’ve jammed that block. If this stretch is “quiet,” as the national news said, it’s because just to the south begins Lower Broadway’s Nashvegas honky tonks lately of the boom years.

We’ve seen what truck bombs can do, as with Oklahoma City. That was what we locals talked and texted about in those first few days. Why pick a block largely shuttered for the pandemic? On a holiday at the least crowded time possible? Why blare that weird recording to force cop attention and an evacuation? If you really wanted to avoid casualties, why not go another block north? It’s mostly parking.

As I write this, we still have only a sketch what the bomber wanted. Politics, of its warped kind. In letters mailed shortly before his suicide, the bomber raved conspiracy theories and crackpot ideas about lizard people and aliens taking over Earth. He’d even been fingered as big trouble brewing by his then-girlfriend, though the FBI and local law enforcement missed the signals.

His possible target feels a little clearer. That block has a hidden something special. You wouldn’t even notice the telecom hub if you walked past. Its tasteful brick is well-designed camouflage against the nightspots across the street. Nashville tip, y’all: Honky tonks are loud, inside and out. 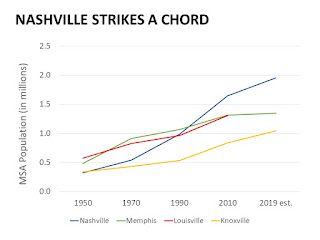 Wait, you say, Nashville has a major telecom hub smack in your commercial district?

Let’s rewind to those riverport days. Nashville’s importance was real– ask the Union Army and many a railroad baron– but as a regional transport crossroads and state capital. This place was no one’s metropolis. For proof: You don’t find many Nashvillians of a certain age who were actually born in Nashville. In 1950, the MSA notched 322,000 folks. Any day now, Nashville passes 2,000,000 souls. When you boom like that, a lot of things are stuck where they used to be, including infrastructure. Where could you move them when the center city is piling up with gentrified housing?

It was weird in that aftermath. Frustrating. Much cell service was out for days. People couldn’t get a hold of each other. They couldn’t call 911. Air traffic was grounded. Residents for blocks can't get into their homes, maybe ever. These old buildings could collapse. Friends mention bad dreams and psychological impact. That’s more than understandable. It’s natural. Second Avenue is a place many of us fight the bachelorette parties and conventioneers to take in riverfront concerts, or we embrace the throngs and relish some truly spectacular people-watching. We’ve eaten in those bombed-out restaurants. And where there’s one bomber, there could’ve been more bombs and the inevitable lame copycat.

Nobody had a great 2020, and COVID-19 initially hit many regions much harder. Still, Nashville had us a year. In the bleak March days of the early shutdown, an EF-3 tornado ripped a swathe just north of downtown. The storm system leveled neighborhoods as it moved east. In May, a derecho made it double the wind damage and left an extended power outage. A few weeks later, those Nashvegas bars self-inflicted a wound by opening up too soon and with token enforcement of social distancing restrictions. A reckless house party of the super-entitled made national news. Then came the case spikes and hospitalizations, and those boot-scootin’ bars ended up with a black eye and deeper money hole. Folks who work or gig in those bars are getting crushed financially.

Then a downtown bomb on Christmas morning.

But Nashville is already stronger for it. That’s been true everywhere a bomb goes off. The fever-dreamed among us get so caught up in their own noise that they lose a simple fact: The world is full of good people. Resilient people. Years from now, that’s what the best movie versions will show: We won what they started. We pushed forward just fine.