If you read John Floyd's discussion of blurbs a few days ago, you found his usual Fort Knox worth of wisdom. Since we have so much in common (We went to different high schools together), I was thinking about blurbs, too.

Does a blurb really help your sales? I don't know. But if a well-known writer says nice things about one or two of your early books, it gives you more street cred, and that shouldn't hurt, should it?

John and I agree that it's best to ask friends for blurbs, especially if they're well-known and you have compromising photographs. But John prefers email, and I like to ask people in person on the theory that it's harder for most people to say "no" face-to-face than it is to send an email.

Usually, that well-know writer and I have a common theme in our writing. Sometimes, the connection is a little more arcane. 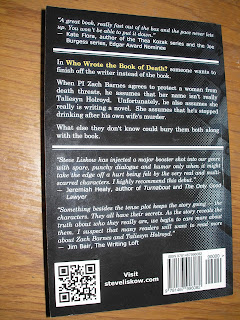 Jeremiah Healy and I met at Crime Bake in 2006. I admired his books, but I also read his blogs about his diagnosis and treatment for prostate cancer. I was diagnosed with the same condition only weeks before the conference, and we spent time at the hotel bar discussing his experience and the options. When I sold my first novel a few years later, he remembered the drinks I bought and asked for my outline and first 30 pages. Then he wrote a blurb I have recycled at least twice.

After that first novel, for reasons that don't bear discussion here, I decided to self-publish, and that made getting blurbs more difficult. Many established writers are forbidden by their contract from blurbing a self-published writer. At least, that's what they told me. Luckily, I was a member of MWA and SinC and often appeared on panels or at workshops, so I could make other connections.

Chris Knopf and I did a panel together in White Plains, New York on the night of an Old Testament cloudburst. 85 people signed up to hear the four-person panel, but only 7 showed up. Chris and I both drove about 80 miles from Connecticut (He got detoured by a washed-out road), and the four of us didn't sell a single book to the small audience. The shared misery brought us together, though, and Chris agreed to blurb my first self-published novel, The Whammer Jammers. He used to work in advertising, so he wrote me a blurb so good I even put it on my bookmarks. 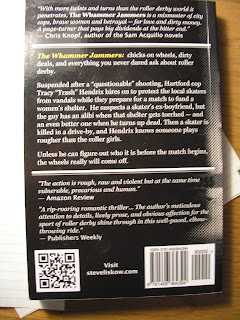 I only have two blurbs from writers I didn't personally know, and their books shared a theme or subject I was writing about, too.

Cherry Bomb is about teen trafficking on the Berlin Turnpike, a notorious stretch of Connecticut blacktop that connects Hartford and New Haven. Another writer had written books about troubled teens, and she gave me a blurb that showed up on three of my books.

I got the other blurb for that book through sheer synchronicity. Browsing at Border's (Remember them?), I discovered a nonfiction book about trafficking on the Berlin Turnpike. Even better, author Raymond Bechard was going to do a signing the following week. I bought the book and burned through it so we could discuss it later. When we met, I discovered that his girlfriend's cousin was one of my English-teaching colleagues. Sometimes, it just works out...

By the time I wanted to publish Blood on the Tracks, I'd run out of famous writer friends, and a few others declined my request for a blurb because I was still self-publishing.

Then I remembered Raymond Bechard and the friend connection.

Blood on the Tracks is about a rock and roll cold case in Detroit. By happy coincidence, a high school classmate became a session musician in Detroit. When I met her at our reunion, her escort was the former drummer from Bob Seger & the Silver Bullet Band. She had been married to the drummer in a band fronted by Dick Wagner, who later played behind Lou Reed, Aerosmith, and a host of other stars. He also wrote many of the songs that became hits for Alice Cooper. Susie said I could drop her name into the discussion, so I asked Wagner, Bob Seger, Alice Cooper, and Mark Farner (Who briefly played bass in Wagner's first band). Wagner, who had recently published his own rock and roll memoir, said sure.

He had serious health issues at the time, and he was preparing for what he probably thought would be his last tour. I dedicated the book to my classmate for all her help and published the book with Wagner's shout-out. Two days before I received my first copies so I could mail him one, Susie posted on Facebook that Dick's health problems caught up with him and he passed away.

That was the last time I asked someone for a blurb. Reviewers said a few nice things about me and spelled my name right, so I re-cycle those comments, too.

I don't get asked to write a blurb for anyone very often, but it always thrills me.