Jan Morris died a couple of weeks ago.  She was an extraordinary writer, in the tradition of adventurers like Robert Byron and Freya Stark, or Patrick Leigh Fermor and Peter Fleming – and she clearly inspired the later guys like Bruce Chatwin and Redmond O’Hanlon, or even an outlier like Jonathan Raban. 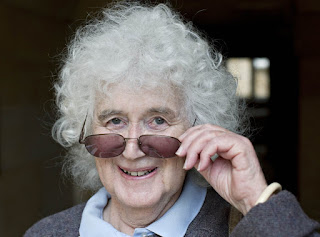 Morris was a travel writer in the sense that M.F.K. Fisher is a food writer.  M.F.K. didn’t write cookbooks, she wrote meditations about vegetables, and pots, and cranky stoves, and feeding cranky kids.  Jan Morris once remarked that she wasn’t writing guidebooks, she was trying to capture what first caught her attention about a place.  And then how that attraction deepened.  Her favorite cities, by report, were  and , and she revisited them, her books an overlapping portrait.

Oh, by the by, she was at the base camp on Everest when Edmund Hillary and Tenzing Norkay made the summit, reported on the day of Elizabeth II’s coronation.

Aside from my delight in her Pax Brittanica trilogy, a history which my friend John Crowley credits (for his novella Great Work of Time), her tight little sliver of a book, Manhattan 1945, proved a huge resource for my period novel Liar’s Dice, and a dozen Mickey Counihan stories that followed.

Later on, she wrote two fictions herself, Last Letters from Hav and Hav of the Myrmirdons, which I suppose you could characterize as SF, or fantasy.  They’re imaginary travel books, dispatches from a place on the horizon of memory, or our peripheral vision.

Posted by David Edgerley Gates at 23:58