Author Fleur Bradley and "Midnight at the Barclay Hotel" 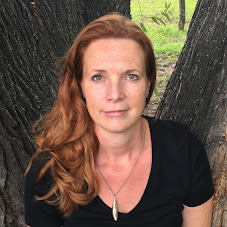 I first crossed paths with author Fleur Bradley well over a decade ago when we were both semi-active in the Short Mystery Fiction Society. We met in person at Left Coast Crime and have remained friends ever since, keeping tabs on each other's work and checking in from time to time.

Fleur has since gone on to great success as an author of middle-grade mystery (ages 8-12), and most recently published what has quickly become my eight-year-old son's favorite book. She also graciously agreed to be interviewed for this blog. First, a bit more about Fleur:

Fleur Bradley is the author of the spooky middle-grade mystery Midnight at the Barclay Hotel (Viking Books for Young Readers) which recently made NPR’s Best of 2020 Books list. She’s passionate about two things: mysteries and getting kids to read. Fleur regularly does (virtual) school visits and speaks at librarian and educator conferences on reaching reluctant readers. Originally from the Netherlands, Fleur now lives in Colorado Springs with her husband and two daughters, and entirely too many cats.

And here's the interview.

Why kids' books? And more specifically, why kids' mystery books? 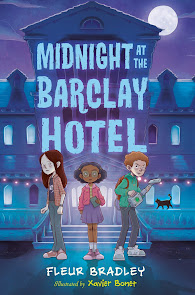 I actually didn’t set out to write kids’ books… I got my start writing short mysteries, and that was what I did for the first ten years of my writing career. I wrote a few novel-length YA mysteries that almost made it to publication, then my first published book was Double Vision, a middle-grade (HarperCollins, for ages 8-12). You could say I kind of fell into writing for kids by (a very happy) accident. My agent at the time suggested I write middle-grade.

After finishing the Double Vision trilogy, I wanted to write a true mystery for kids, one that would be like the Agatha Christie books I loved growing up, but kid-friendly. I wanted to share the fun of solving the puzzle, how an investigator might gather motive, means, opportunity… All with a bit of a sense of humor, and a lot of heart.

I love writing for kids. It allows a sense of wonder, discovery, and honesty—you really have to bring your A-game as a writer. I also love doing school visits, and hearing from young readers, or parents and grandparents who are reading the book together with kids, especially now that we’re all home so much.

There are always challenges with any artistic undertaking, and writing a book is certainly no exception. What challenge about bringing Midnight at the Barclay Hotel to life did you find most out-of-left-field/surprising?

It was having the patience for the idea to come together, oddly. I had the idea for the mystery, but just couldn’t get it to sing… In an earlier concept, I had the story set at a museum. The setting was cool, but it wasn’t working. I shelved the whole mystery for kids idea, and a few years later we visited the Stanley Hotel here in (Estes Park) Colorado and did the ghost hunting tour that I knew I had the right extra ingredient: a cool setting.

I made my own hotel, the Barclay Hotel, so I could have creative freedom to make it and the backstory my own. But it was that mashup of traditional mystery and spooky setting that did the trick. I just had to wait for it.

As we've discussed, my eight-year-old loves your book (J.J. the ghost-hunter is his favorite character, with Penny the Florida book-worm a close second!). Reading it with him brought to mind Agatha Christie's At Bertram's Hotel, because it involves (at least tangentially) a childhood visit to a luxury hotel, and because you reference Agatha Christie in the book a number of times. Was that intentional?

The Agatha Christie references were definitely intentional. As a kid, I was an avid reader, and made my way through the children’s department at the library pretty quickly. There was no YA at the time, so a nice librarian suggested I try Agatha Christie’s books—I started with The ABC Murders, and have been hooked on mysteries ever since.

I didn’t try to reference At Bertram’s Hotel on purpose—I’m ashamed to admit that I haven’t read that one yet… It’s going on my reading list now.

I think it’s that theatrical, over-the-top cast of characters in Agatha Christie’s books that lends itself particularly well to children’s books. I had a lot of fun with that as a writer. Plus, I really hope that kids who read my books get that same excitement for mysteries, and want to read more of them, well into adulthood, like I do. Midnight at the Barclay Hotel is my ode to mystery in a way.

Even though the narrative is third person, you do an outstanding job of slipping into the viewpoints of the pre-teen protagonists. And head hopping between two girls and a boy, Phew! Was that difficult for you?

Oddly, no… I thought it would be hard to juggle three perspectives too, since my previous books were first person, one character. But once you start imagining the story through those kids’ eyes, it comes naturally. I think that’s what makes the best children’s book writers: the ability to remember what it’s like to be a kid, what you’re worried about, what excites you… Writing for kids is a lot of fun. Add a mystery to that, and I’m certainly hooked.

Thanks so much to Fleur for taking the time to talk with us about her new book, Midnight at the Barclay Hotel, and about her journey to writing middle-grade mystery! If you know a young reader who loves mysteries (and not just young readers-we read it together as a family, and my wife and I both loved it too), I strongly encourage you to check out Midnight at the Barclay Hotel!

And for more information on Fleur and her books, visit www.ftbradley.com, and on Twitter @FTBradleyAuthor.

See you in two weeks!
Posted by DoolinDalton at 01:04