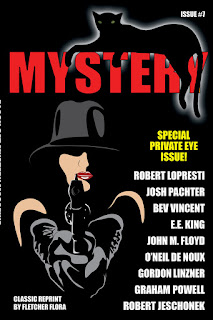 The special all-private-eye issue of Black  Cat Mystery Magazine is out and I am delighted that my story "The Charity Case" is in the lead-off position.  (And by the way, I just realized that this is my seventh published story this year.  I believe that breaks my previous record by two.)

The story features Marty Crow and he has been hanging around my life for thirty years.  Here is how he came to be.

I was born and raised in New Jersey. Every fall we would go down to Atlantic City for the teacher's convention Dad always attended.  Being a shore town, A.C. was not at it's best in late autumn.

Like a lot of shore resorts it fell on hard times and in the seventies someone had the brilliant idea that the solution was legalized gambling.  None of the tacky slot-machines-in-every-diner like they do it in Nevada.  No sir.  Gambling was only allowed in casinos which also had to be hotels.  The first such house opened in 1978 and I have not liked the place as much since.  Casinos, full of bad luck, bad judgement, and bad air, depress me. 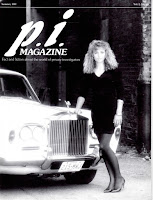 My reaction was to create Marty Crow.  He is an Atlantic City native, a private eye, and he has a gambling addiction.  That would be bad enough but what makes it worse is that he is firmly in denial, which is like having one short leg and refusing to use a cane.  A police sergeant friend called him the fourth best private eye in the city and Marty replied that he was the third best, because one of the others had gone back to parking cars.

The first three stories about Marty appeared in P.I. Magazine in 1989 and 1990.  Amazingly that journal is still going, although it gave up on fiction long ago.  Probably the best thing that came out of that for me was meeting S.J. Rozan, whose first private eye stories appeared in some of the same issues as mine.

In 1991 Marty leapt to the big time with the first of two appearances in Alfred Hitchcock Mystery Magazine.  Two years later "Crow's Feat" showed up in a British anthology called Constable New Crimes 2.  That got me one one-and-only Anthony Award nomination.

When Michael Bracken announced a collection of P.I. stories related to food I sent him "Crow's Avenue," in which a bottle of soda is the main clue.  It appeared in Hardbroiled, and yes, that is spelled correctly.  (Alas, reviewers and readers assumed it wasn't.)

Even cooler, it was one of two of Marty's adventures which the Midnight Mystery Players adapted for radio.  The Players have vanished, but thanks to James Lincoln Warren, the dramatization of "Crow's Avenue" can still be heard at Criminal Brief.

Marty then took a decade off until Criminal Element proclaimed what they hoped would be a new series title Malice Occasional. The first (and, alas, only) volume was titled "Girl Trouble," and I knew "Crow's Lesson" would be a perfect fit.  It was inspired by a story in the New York Times about a school board hiring private eyes to follow certain students home to make sure they were living in the district.   What could possibly go wrong with having strange men following little children through the streets?  I figured Marty could find out. 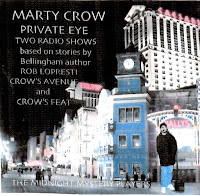 Not all the stories involve gambling, although I always try to mention it.  Most dramatically, in "Crow's Feat" Marty blows a bodyguard assignment because he can't stay away from games of chance.
But what about his latest appearance?  In "The Charity Case" Marty is hired by a  hardware store owner, in the City for a conference, who has given eight hundred dollars to a beggar on the street and now regrets it.  Why did he do that?  Well, read it and find out.

I suspect that this will be Marty's last dance.  I am a long way in time and space from his origin and we don't seem to connect anymore.  But I wish him well, the poor fool