A Semifinal Word on Semicolons

Semicolonoscopy [sim-i-co-lun-OS-cah-pee] – An examination to detect abnormalities in the use of a certain mark of punctuation. 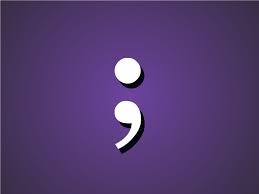 A popular topic recently at one of the writers' forums (fori?) was semicolons--their use, their overuse, etc. Should fiction writers even include them at all?
I think it's interesting that some of my writer friends are banner-waving fans of semicolons, while others say they should be used occasionally but sparingly, and still others avoid them like Kryptonite. And that last group seems to be growing. Many talented writers feel that semicolons should never be used because a period can always do a better job. Kurt Vonnegut once said, of semicolons, "All they do is show you've been to college"--and in her Huffpost US article "Semicolons: How to Use Them and Why You Should," Claire Fallon said, "The semicolon has come to be seen as the gall bladder of punctuation marks: It theoretically serves some sort of purpose, but if it were removed entirely, everything would probably be fine."


I think semicolons, troublesome as they are, should remain a part of your writer's toolbox. Even if you're a fiction writer. But I also think they should be stored in one of the back compartments, along with exclamation points, and I agree that their overuse can make you an embarrassment to friends and family.


So when and why, if ever, should you use a semicolon? I can think of only three reasons, the first two of which are good ones.


1. Use a semicolon to separate phrases in a list that contains commas.


2. Use a semicolon when two complete sentences are too closely related to be separated by a period. And some of them are. (To paraphrase something I saw at the blog Legible awhile back, "A period says, 'Full stop. New idea.' A semicolon says, 'Pause; related idea.'")


Example: "The editor says she loves short stores; they're addictive."


Sure, you could use a period instead--but here I think it would provide too much separation, and too much of a pause.


3. Use a semicolon before a connecting word like therefore, otherwise, instead, or however.


Example: I might as well write this column; otherwise, I'd have to mow the lawn.


I can't recall ever using a semicolon this third way, just as I wouldn't use one before a conjunction like and or but, which is also acceptable in certain situations. I would just reword the sentence to avoid needing the semicolon. 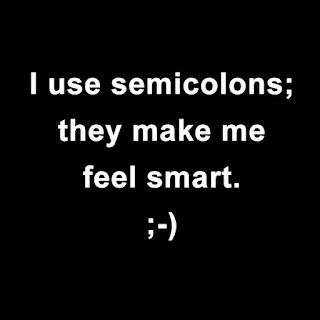 A recent example of semicolonization
Here's something that came up just last week, in a mystery story I finished writing yesterday. The following is a paragraph near the beginning of the story:


The old woman was inching toward him through the trees and undergrowth along the creekbank, her back stooped and her eyes on the water. On her head was a blue baseball cap with a gray ponytail sticking out the hole in the back; in her hands was a pump shotgun. Just as Jabbo was trying to decide whether to hide or run, she raised her head and looked straight at him.


As you can see, I chose (after some hemming and hawing) to use a semicolon in that middle sentence. I realize a period could've been used, but--again--I thought there was too close a connection there, and that a period would've created too much of a "pause." A semicolon just felt right, and gave not just the sentence but the whole paragraph the rhythm I thought it needed. Feel free to disagree. (Hey, I haven't sent the story anyplace yet, so if enough folks do disagree, I might throw pride out the window and change it.)
A disadvantage for fiction writers


I think one of the semicolon's biggest problems is that it can make your writing appear too formal. If you're going for formal, fine, but most of my fiction writing is informal, and the last thing I want to do is have it look stiff or stilted. I certainly don't like to use more than one semicolon every couple of pages. And I never use a semicolon in dialogue. When I see that in my reading, it snaps me out of the story. It just doesn't look or feel right.


A quick example, here. I just finished re-reading William Goldman's The Princess Bride, and at one point Buttercup's father sees something through the window and says to her mother, "Look!" Irritated and busy with something else, the mother replies, "You look; you know how."


I understand that it's an ideal place for a semicolon, because (as I keep saying) those are two complete sentences too closely related to be separated by a period. To say "You look. You know how." sounds clunky to me, and risks losing the scolding snippiness of the reply. And even though a grammatically incorrect comma sometimes works for this kind of thing (especially in dialogue), I don't think it would, here. The reply "You look, you know how." doesn't feel right, and might even be misunderstood. So the semicolon works. But . . . if I were writing something like that today, instead of fifty years ago when Goldman wrote it, I think I might substitute an em-dash, which it's hard to misuse anyhow. The result would be "You look--you know how." Which might solve the impression-of-formality problem.


The result of that particular semicolonoscopy is obviously a matter of opinion. I'm not even sure about it my ownself. John Sandford, one of my favorite authors, has used a lot of semicolons in dialogue in his Lucas Davenport novels, and colons too, but--for some reason--they don't seem to bother me. (Hey, if you're good enough at what you do, you can get away with a lot.)

The road to Damascus


When I started writing fiction for publication 26 years ago (boy does the time fly) I was guilty of using far too many semicolons, and commas too. I thought there was no end to the clarification those marks of punctuation could provide. I can still get carried away with commas at times, but otherwise I have (hallelujah) seen the light. I've cut way back on semicolons, and exclamation points as well. I probably still use too many dashes and too many parentheses, but we all have our vices. I think one reason I enjoy using dashes and parentheses is that I like to interject "asides" into sentences, when I write and when I speak. But that's another matter, and a discussion for another day. 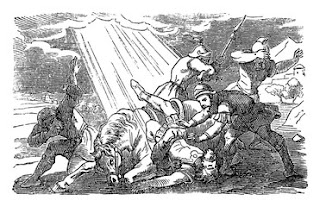 Sometimes my use of semicolons depends on the project. One of my writer friends for whom I have great respect is also an occasional editor of anthologies, and he's not fond of semicolons. So when I submit a story to him, I make sure there are no semicolons to be found. It's not hard. As I mentioned earlier, the way to avoid or remove semicolons is to construct or reword sentences such that they're just not required.

What's your opinion? Use them whenever you like? Use them in moderation? Weed them out entirely?


I plan to continue to use semicolons, annoying or not, when I feel they're needed. I'll treat them like bacon, or Hostess Twinkies, or real ice cream--they're not part of my regular diet, but now and then they just hit the spot.

I'll close on a profoundly serious note, with something from my latest effort, a book of 300 short poems called Lighten Up a Little:

When edited, writers have said
Semicolons are something they dread;
What if someone had stolen
One half of your colon
And plugged in a comma instead?