Why I Don't Read or Write True Crime, Part One


by DoolinDalton
I don't read or write True Crime. At least not anymore. And not for a long time. Given the popularity of the genre, and the subject matter of this site, I do not expect this to be a popular opinion.

But bear with me. Let me explain.

I grew up in Spokane, Washington. During my early teens the city was terrorized by the "South Hill Rapist," a serial rapist who focused mostly on the aforementioned South Hill, an affluent walking suburb of the city. When he was finally caught and convicted, the South Hill Rapist turned out to be Frederick Harlan {"Kevin") Coe, the son of the managing editor of the one the city's two major newspapers, Gordon Coe. In a twist right out of a Hollywood movie, Coe Sr. was responsible for monitoring a tip line set up by his paper, The Spokane Daily Chronicle, intended to help find the rapist who turned out to be his own son.

By the time the Spokane police caught up with him, Kevin Coe had been running amok for the better part of three years, and brutally raped dozens of women. His parents were socially prominent, "pillars of the community," and his mother was also a whack-job (who first tried to give her son an absurd alibi, and then went to jail herself for trying to hire a hitman to kill both the presiding judge and the prosecutor in her son's court case), so his trial, where the brutality of his rapes was put on lurid display, was a regular media circus. 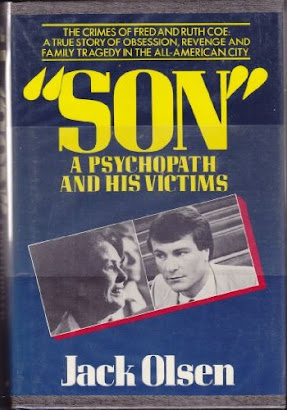 As such it is unsurprising that Coe's crimes, capture and subsequent trial attracted the attention of one of America's great True Crime writers, Jack Olsen. Olsen, who had famously written for publications from Sports Illustrated to Vanity Fair, and everything in between, spent eighteen months researching and writing a book about Coe, the critically acclaimed Son: A Psychopath and His Victims.

I was sixteen when Coe was caught and convicted, working my first real job, at a hospital which sat right at the foot of the South Hill. And my parents bought and read Son when it came out a couple of years later. And once they had finished it, I did too.

Olsen, a Washington state transplant who passed away on Bainbridge Island at the age of seventy-seven in 2002, was a hell of a writer. I was transfixed by Son, both recognizing and not recognizing the setting as my own hometown. This monster, Kevin Coe, drove the streets where I drove, ate where I ate, hung out in the parks I and my friends frequented, shopped where I shopped, and raped a whole bunch of innocent women along the South Hill's High Drive, where I dated a few girls and attended more than my share of parties.

It was not the start of a lifetime spent reading True Crime books though. And it wasn't until years later that I even gave much thought to the question of why. I found the story compelling. The setting, Spokane, was a place I thought I knew well, and yet I learned a lot about it I might have otherwise never learned, simply by reading Olsen's book. And, as I said above, Olsen could tell a story.

I just didn't find anything particularly compelling about the psychopath at the heart of the story. As I got older this proved to be the case with the relatively few other well-written, exhaustively researched True Crime books I read: Vincent Bugliosi's superb take on Charles Manson and his cult in Helter Skelter. A compelling account, and horrifying in the details of the things those hippies did on Manson's orders. And it's a story rendered all the more remarkable because it was written by the man who brought the whole lot of them to justice (Bugliosi prosecuted Manson and his followers for their killing spree). And yet Manson? A career petty criminal who never killed anyone himself, but somehow managed to convince others to kill for him. I was no more interested in him than I was in Coe.

I started Ann Rule's classic The Stranger Beside Me, which dealt with her collegial relationship volunteering at a Puget Sound suicide hotline with eventually convicted and executed serial killer Ted Bundy, but didn't finish it. Something about the way Rule both documented her relationship with Bundy and also excused herself for profiting from that relationship, which she continued to cultivate for her own ends long after Bundy had been arrested and sentenced put me off. I just found it gross. All of these poor women who suffered at Bundy's hands, terrorized, tortured, and brutally murdered, and Ann Rule's giving the guy publishing advice while he's in jail awaiting sentencing on kidnapping charges.

Did Rule have any inkling what Bundy had done? She mentions earlier in the book that she discussed with a police detective the possibility of Bundy being the killer the police were searching for who had identified himself as "Ted" to a potential victim at a popular Lake Washington park where another woman disappeared that same day. But after his kidnapping conviction she withheld opinion (at least for the time being), and even offered to co-write something about his experiences and split the profits with him.

I stopped reading not long after that.

And in this particular profit motive, Rule was something of a trailblazer. Nowadays you have popular podcasts such as "My Favorite Murder," which bills itself as a "true crime comedy" podcast, and boasts thousands of fans ("Murderinos," in the show's parlance). I thought it only fair to sample this podcast before mentioning it in this post, so I listened to a few of its episodes. Definitely not my thing.

And then I mentioned in passing that I was writing about both True Crime and the current True Crime podcasting craze during a conversation with a friend and fellow writer who once harbored ambitions of writing within the genre (he has since moved on to other genres). His response was worth quoting, so here it is, with his permission:


I especially dislike the hybrid true-crime memoir. If I’m immersed in a compelling story of murder, I don’t want to see the storyteller run the camera on themselves and tell us all about their relationship problems or their ailing grandparents or their struggles to get into grad school unless they have a direct and compelling connection to the people, places and events of the murder story.  (And “she was my second cousin, two twins over, we hung out a couple times at summer camp” doesn’t cut it.) It is cognitively dissonant in the extreme; it is the bait-and-switch technique of a literary used-car salesman. “Murder, grief, loss, community impact ... but let’s talk about my ex-boyfriend for the next fifteen pages and then weave in the fact that I lived in the murder town for a few months.” Who decided there was an audience for that?

Now let me be clear: I have things I love to read that would likely make you laugh out loud. I am not above diving in to pure escapism strictly for escapism's sake. I am many things: but a literary snob is not one of them. And I'm not slagging people who like to read this stuff, or enjoy these podcasts. I just don't, and I figured if I was going to broadcast this opinion, I really ought to deeply examine why.

When I was in college I took a philosophy class in which the professor had us read M. Scott Peck's People of the Lie, and Hannah Arendt's stunning Eichmann in Jerusalem wherein she explored the seeming ordinariness of fugitive Nazi bureaucrat Adolf Eichmann. Eichmann, an architect of Hitler's "Final Solution" (extermination of the Jews), had fled Nazi Germany shortly after the end of World War II, and successfully evaded capture in South America for nearly two decades until Israeli intelligence agents tracked him down and captured him outside Buenos Aires, Argentina in May, 1960. Then they smuggled him out of Argentina, to Jerusalem, where the Israeli government put him on trial for war crimes. For her portrait of Eichmann, who was soft-spoken, slightly built, balding, near-sighted, and possessed of the demeanor of a clerk, Arendt coined the phrase, "The banality of evil."

Which takes me full circle: Coe, Manson, Bundy.  A hundred naked meth addicts running from the police in a variety of episodes of "COPS." Banal, bland, uninteresting monsters, not worth giving a second glance or a moment's attention.

Why should their willingness to visit untold misery and pain on innocent people profit them in the slightest? What is it about their innate viciousness that renders them worth my time and attention? Again, if you find this sort of thing compelling, you want to know what makes serial killers tick, I can understand and respect that. It's just not my thing.

But that's only half of the reason why I don't read or write True Crime.

The other half I'll expand upon in my next post in a couple of weeks, when I talk about my day gig, and how it's brought me into close contact with a variety of criminals and their victims.

See you in two weeks.
Posted by DoolinDalton at 02:09