Wearing Masks During COVID19: How Neuroscience Can Help Us.

Never have lives depended so much on getting a buy in from the public to wear masks. The evidence that masks protect us from COVID-19 is clear and unequivocal. In terms of scientific evidence, that is. Where it all falls apart is when emotional arguments are made against wearing masks.

Many argue that we should avoid the emotional aspect of COVID and simply concentrate on the rational arguments for mask use.   However, this argument falls apart too, because all decisions involve emotions and we can’t keep people safe without appealing to them. Why? Because that’s how our brain works.

In the 1990s, the neuroscientist and physician Antonio Damasio wrote a groundbreaking book, Descartes’ Error: Emotion Reason and the Human Brain. Through studying people with brain lesions he demonstrated how decision making necessitates emotional input: decisions cannot be made without emotional input.

Much research has supported these findings and this has been taken into the political arena by authors like Westen and Lakoff. The basic conversation in both these books is how all political decisions involve emotional input.

Some may feel that decision-making that necessitates emotional input is not a good thing. They will side with Descartes and claim that purely rational decision-making exists. Like everything in the human body, from kidney to heart function, one doesn’t get to chose how organs work. The vast amount of evidence from lesion studies proves this to be the way the brain works.

I understand the concern with the idea that decisions are emotionally based - I grew up with scientists who felt emotions should never enter decisions. Emotions were seen as out of control and in need of control.

So, although emotions are often viewed as the basest form of human reaction, they involve complex cascades of brain activity that are crucial for synthesizing social, empathetic and protective aspects of a decision.

This impacts mask wearing because different countries have different emotional narratives to which they generally respond.

All governments are using narratives to explain the spread of COVID-19. In Canada, the narratives of the federal and provincial governments are largely in line with each other and all appeal to a sense of helping others. This narrative has high emotional salience in Canada, where helping others, working together as a country to help each other is the basis of everything from our universal healthcare system to our investment in schooling. It is a core value. Not for everyone, of course, because no country has a homogenous set of values. However, most countries do have some values that are widely shared.   Even some of the anti-maskers in Canada protest under the banner of “Hugs not masks”. Appealing to a sense of community well-being while spreading the virus may be odd, but it encapsulates the emotional weight of community in Canada.

South of our border, COVID-19 infections and deaths are mounting, and masks would help limit the spread of this virus. There are many factors involved in this but one factor is the conflicting messaging coming from the federal government and the states. Another factor may well be the emotional weight given to the idea of individual decisions - much of the messaging has actually been against the community well-being by arguing that individuals can’t be forced to do things by others, particularly governments. We have some of that in Canada, but not in such large numbers because the narrative in Canada is that taking care of others is valuable and putting yourself above the health of others is generally frowned upon.

When I think of appeals that have been made to Americans, this comes to mind:

Or this as a mantra for today: 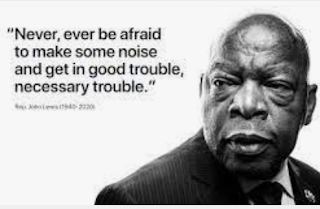 So many fine and civic minded Americans have called upon Americans to follow their better angels. These appeals are emotional - heck, I’m Canadian and they move me to the core.

Some of my American friends have argued that the population of America has changed and that appealing to better angels will not work because many are driven by anger and fear. The division of people into those who are angry and scared verses those who are rationally following public health measures is a fallacy. We are all scared and we are all angry. These are difficult times and we would be completely detached from reality if our responses to this drastic situation were not intense: remember our emotional systems are nuanced, coordinated and work with reality because they are dependent on input from our senses.
Directing our fear towards its source - this virus - drives many of us to wear masks, wash our hands, keep our distance from people and allows us to stay safe. Anger? That's a great energizer for fear and enables us to fight paralysis by driving us to action. We are seeing governments and others trying to direct anger when infections increase towards those who are infected and, these days, this is often young people who are painted with the narrative that they are selfish and irresponsible. When we direct anger towards our own, it's rarely productive and always divisive. When young people have heard inaccurate information that they are largely unaffected by this virus, we should look to the source of their behaviour and perhaps correct the information they were given, using that anger to drive us, energetically, to educate them and appeal to the values of community and empathy that we have raised them with.

History has taught us that citizens who have been complicit in terrible things can and have turned things around - think postwar Germany. Surely, we can give our young and our fellow citizens the benefit of the doubt and appeal to their better angels - to their more noble emotions such as empathy.

One of the bright spots - maybe - is the response Canadians have seen to mask mandates and this might help in America. “An overwhelming 95 per cent of the survey respondents say they now wear a mask on public transit. In mid-July, those numbers were as low as 45 per cent.”  In cities all over Canada, we are seeing similar response to mask mandates. Not certain if this would work with our southern neighbours given the violence that has accompanied masks refusal and the lives that have been lost. But maybe this provides some hope. Along with an emotional appeal to civic duty grounded in empathy.

I don’t know if this will work. I’m just hoping that we can all turn the rising infections around by standing on the shoulders of scientists, who explained how we make all decisions, including whether to wear masks or not: facts without emotional appeals will simply not work to help people make the right public health decisions.
Posted by Mary Fernando at 00:00