by David Edgerley Gates
I’m not sure what started this train of thought.  I might have been thinking about portrayals of the Raj, or the relationship between colonials and Empire, A Passage to India, Shakespeare Wallah, The Man Who Would Be King, and I drifted into more personal reminiscence.


My dad grew up in the wilds of , and was sent East to boarding school when he was fifteen.  He was the youngest of five boys, and followed in his brothers’ footsteps.  I think plainly my grandmother thought they’d get a better secondary education; it almost certainly helped them get into a good college.  My own experience with boarding school started at the same age, but I didn’t profit from it nearly so well.  I’m bringing this up because it has a parallel in Rudyard Kipling’s exile and return – you could definitely do something with this as metaphor, but I mean it literally, Kipling at five years old, uprooted from the heat and light of Bombay, packed off to the damp south coast of England, abandoned to the rigid torments of an unyielding Evangelical orthodoxy.


I don’t in any way mean to suggest my experience, or my dad’s, was anything like Kipling’s.  I idealize my father’s childhood, in fact, as some sunny upland of innocence, an unshadowed place out of Booth Tarkington or Don Marquis, gigging for frogs and going barefoot and swimming nekkid in the turbid shallows of the , but this is utter nonsense, nobody’s childhood is unshadowed.  As for his years at , he remembered them with enough affection to encourage me to apply there.  I wound up going somewhere else, and I wasn’t crazy about the whole prep school formula, either, but it was a long way from Dickensian horror.  Kipling wasn’t so lucky.  The years in , in the care of a retired Merchant captain and his wife, were manipulative and abusive.  Kipling’s own account, sixty years later, in Something of Myself, unflinchingly conveys his bewilderment and terror, the House of Desolation, he calls it.  “Often afterwards, [my] beloved Aunt would ask me why I had never told anyone how I was being treated.  Children tell little more than animals, for what comes to them they accept as eternally established.”  The despair is absolute, a lifetime after, the injury never forgiven. 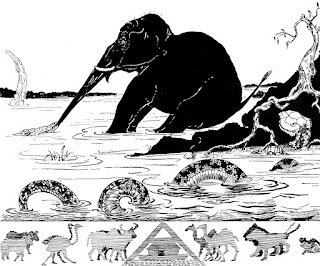 Kipling says a couple of very interesting things about this period.  First off, remember that he was imprisoned there for six years, aged five to eleven.  He says, Turn a boy over to the Jesuits, for that time of life, and they’ll own him for the rest.  He also says, There were few books in that house.  But when they found this out, his parents sent him books, and they were rescue.  Lastly, he talks about his strategies for combating abuse.  “If you cross-examine a child of seven or eight on his day’s doings (specially when he wants to go to sleep), he will contradict himself very satisfactorily.  If each contradiction be set down as a lie and retailed at breakfast, life isn’t easy.  Yet it made me give attention to the lies I soon found it necessary to tell, and this, I presume, is the foundation of literary effort.”  Well, yes.  This is a very sly admission on Kipling’s part, that the cruelty he encountered here was an engine for his imagination.  You don’t have to be a survivor of domestic dysfunction to recognize the coping mechanics; even a pretty healthy family dynamic can require navigation.  Kipling is saying that the habit of secrecy, of concealment, of lies, is a survival mechanism, it’s protective coloration.  Oh, and he sings for his supper.  He begins to make up stories.


Happily, this isn’t taking place in a complete vacuum.  He doesn’t have close relatives in , but there are a few close enough to see the kid’s miserable, and his mother shows up finally to effect his escape.  (He never seems to blame them for this, by the way, Alice and John, his parents.  They identify as Anglo-Indian, overseas English, and it’s common practice to send your children home to so they don’t go native.  The problem being that the foster family Kipling and his sister Trix were lodged with are opportunistic scum.)  We can all too easily imagine the twelve-year-old boy’s apprehension that he hasn’t broken free, that this is all a cruel joke, that the House of Desolation will open its jaws to him again, but no, this isn’t an imaginary release, they spend a careless spring and summer near Epping Forest, and we can’t help but think this is remembered in Puck of Pook’s Hill. 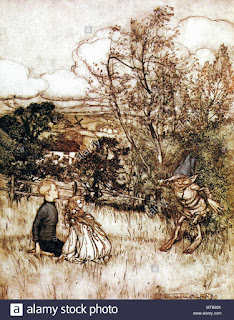 (One of Kipling’s gifts, it seems to me, is his enormous sympathy with childhood.  He re-imagines it.  Reading his children’s stories - or having them read aloud to you - The Just-So Stories, The Jungle Book, Puck of Pook’s Hill and Rewards and Fairies, Stalky & Co., you can hear how each of them are pitched for a different ear.  The Just-So Stories are clearly aimed at four to six, Puck of Pook’s Hill and Rewards and Fairies aimed at a slightly older audience, say  seven to ten.  But he’s never condescending.)


Kipling was twelve going on thirteen when he went to public school at Westward Ho!  It was of course a curriculum that emphasized muscular Christianity, but the boy, Beetle in the Stalky stories, got his growth.  We imagine it was tough at first – did they even have hot bath water? – and there was caning, and institutionalized bullying by the upperclassmen, and for all of that, he pulls up his socks and soldiers on.  This isn’t the torment of , it’s a discipline he can embrace.


He wasn’t, however, a terrific academic success.  His grades weren’t good enough to get him a scholarship to , and his parents didn’t have the means to pay his tuition, so John lined up a job for his son back in , assistant editor of The Civil and Military Gazette. 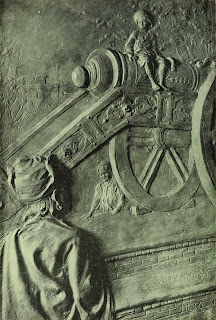 Kipling docks in in October, 1882.  He’s just shy of seventeen, and he’s been away for eleven years.  “I found myself at where I was born, moving again among sights and smells that made me deliver in the vernacular sentences whose meaning I knew not.  …My English years fell away, nor ever, I think, came back in full strength.”


These next seven years account for Plain Tales from the Hills, Soldiers Three, Under the Deodars, The Phantom Rickshaw, and Wee Willie Winkie, along with poetry and six days a week of newspaper content.  The boy, once bereft and cast out, is home again.  His engine burns furiously. 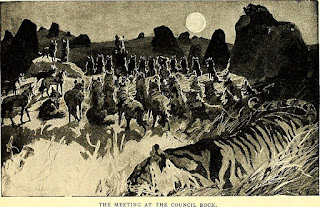 Kipling was always full of industry, and his energies never deserted him, even if age slowed him down a little in the last five or so years of his life, but nothing matches the fever of that time in India. Both the Gazette and its sister publication, the Pioneer in Allahabad, were dailies, and he refers to the newspaper work as Seven Years’ Hard. He clearly wouldn’t have traded the experience for anything else.

Try as he will, no man breaks wholly loose


From his first love, no matter who she be.


Oh, was there ever sailor free to choose,


That didn’t settle somewhere near the sea?

I admit I have a real weakness for writers like Kipling, and Sir Walter Scott, and Dickens, or for that matter John O’Hara, who just pour it on.  Their invention, their freshness, their sheer concentration, is astonishing.  I’m sure they have their moments of despair and doubt.  But they lace up their God damn game shoes, and go out to play, with the score against them.


Kipling is one of those guys who’s anything but transparent.  In disguise, he takes on other voices, he protects himself.  He’s still in a boxer’s crouch.  Restless and forlorn.  The boy, abandoned, finding refuge in stories, a larger fate, a secret destiny.  Kim.  Kipling the spy.  The writer as double agent, infiltrating his own narrative, reporting back to us at great personal risk from an occupied country, where the real enemy is trust.


Famously, he says of Bombay:

The cities are full of pride,


Challenging each to each –


And she shall touch and remit


After the use of kings

This is a man who put regret aside, but regrets color his life.  He forgets nothing, and forgives less.  Kipling absorbs, and apologizes.  Not even Dickens is less himself, or more.  Hidden, he rings true, as clear as water. 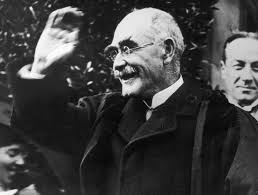