When Writing Historical Fiction: It's Better to Travel 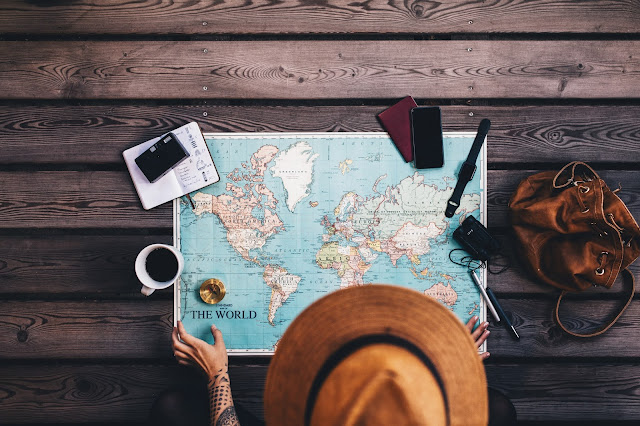 [Elmore] Leonard was originally no more a man of the West than was the Ohio-born dentist Zane Grey. While a kid in Detroit, Westerns enthralled him as they did most people in the 1930s and 40s. When he grew interested in writing during college Western fiction seemed a promising genre he could work in part-time. Unlike many writers then selling Western tales to pulps, though, Leonard insisted on accuracy, and kept a ledger of his research over the years, later crediting his longtime subscription to Arizona Highways magazine for many of his authentic descriptions. All had to be genuine: the guns, Apache terms and clothing; the frontier knives, card games, liquor, and especially the horses.

It's certainly never a bad idea to follow the writing advice of the great Elmore Leonard. His Ten Rules For Writing are rightly famous as terrific advice for any writer of fiction.
In those instances where Leonard's advice isn't readily available, it never hurts to follow his example, if at all possible. Take the one in the quote above from Nathan Ward's Crime Reads article on Leonard. For years Leonard apparently leaned heavily on the content of Arizona Highways magazine.
It's a fine notion. Now, don't get me wrong: it's always better to travel. There is no substitute for actually going to and spending time in the place you're writing about. But, if you're writing about someplace and you can't afford to go, read travel writers. For that matter, even if you can afford the investment in both time and treasure to visit the region where your work is set, read travel writers. No one can help you get a feel for a certain place like people who make their livings helping their readers get a feel for a certain place.
Take William Dalrymple. The British-born-and-raised son of a Scottish baronet, Dalrymple these days is best known for his recent run of riveting books on the history of the subcontinent: India, Pakistan and Afghanistan. Dalrymple is a terrific writer and a first-rate historian who splits his time between a farm just outside Delhi, in India and a summer home in London.
But before he began to make a name for himself with books such as White Mughals: Love and Betrayal in Eighteenth-Century India, The Last Mughal: the Fall of a Dynasty, Delhi 1857, The Return of a King: the Battle for Afghanistan, 1839-1842, and The Anarchy: The East India Company, Corporate Violence and the Pillage of An Empire, Dalrymple began his writing career as a travel writer, taking readers on a tour through the Eastern Mediterranean and the Holy Land (From the Holy Mountain: a Journey Among the Christians of the Middle East), and of course, chronicling the early days of his life-long love affair with India. With his first book In Xanadu, published in 1989, Dalrymple chronicles his modern retracing of the journey of Marco Polo from Jerusalem in the summer palace of Kublai Khan in China. But it was with his second book, 1994's City of Djinns: a Year in Delhi, a memoir of his first visit to the city which has had such a tremendous impact on his adult life, that Dalrymple really began to make his mark.
And there is so much to this memoir which can be of use to the writer reading about the city. Here's an early excerpt laying out his introduction to Delhi and to India: 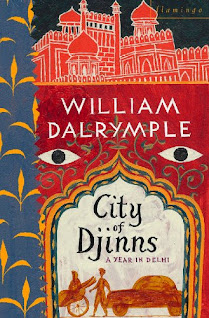 I was only seventeen. After ten years at school in a remote valley in the moors of North Yorkshire, I had quite suddenly found myself in India, in Delhi. From the very beginning I was mesmerized by the great capital, so totally unlike anything I had ever seen before. Delhi, it seemed at first, was full of riches and horrors: it was a labyrinth, a city of palaces, an open gutter, filtered light through a filigree lattice, a landscape of domes, an anarchy, a press of people, a choke of fumes, a whiff of spices. Moreover the city—so I soon discovered—possessed a bottomless seam of stories: tales receding far beyond history, deep into the cavernous chambers of myth and legend. Friends would moan about the touts on Janpath and head off to the beaches in Goa, but for me Delhi always exerted a stronger spell. I lingered on, and soon found a job in a home for destitutes in the far north of the city. The nuns gave me a room overlooking a municipal rubbish dump. In the morning I would look out to see the sad regiment of rag-pickers trawling the stinking berms of refuse; overhead, under a copper sky, vultures circled the thermals forming patterns like fragments of glass in a kaleidoscope. In the afternoons, after I had swept the compound and the inmates were safely asleep, I used to slip out and explore. I would take a rickshaw into the innards of the Old City and pass through the narrowing funnel of gullies and lanes, alleys and cul de sacs, feeling the houses close in around me.
Now, I ask you. Can this guy set a scene, or what? Really helpful for drinking in the flavors, colors, scents and sounds of what on the face of it comes across as a truly unforgettable place. Really not a bad guide if you're interested in writing about modern-day India. 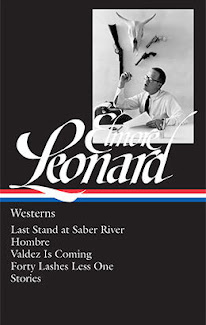 But what if, like me, you're a writer of historical fiction?
In Leonard's case, as stated above, he exploited a modern magazine to help give him local flavor not just for another region of the country, but for that region in another era. No mean feat. It's a testament to Leonard's talent, coupled with his singular vision that he was able to "world build" (to borrow a phrase from our friends who write speculative fiction) using these building blocks for his foundation.
So sure, you can (and should) definitely use your imagination to fill in the cracks. There is certainly no substitute for imagination in the fiction writer's tool kit. That said, you need more than one tool in order to get the job of writing fiction done. I've often felt like our "tool kit" as fiction writers should be more aptly called a "tool warehouse." And of course, another way to use travel writing as one of those tools, to help get the feel for a city or street, or region or state or county or what-have-you during a bygone time is to go and find travel writing from the time in which your work-in-progress is set. 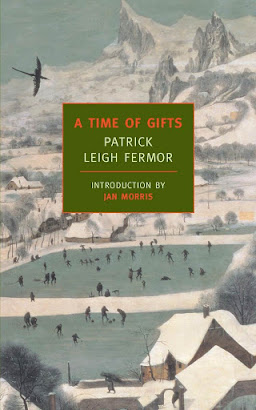