by O'Neil De Noux
And now, something different –


Saint Madelon Pichon
How he died and eventually went to heaven

Cloistered priest Madelon Pichon (1702-1762) swam with dolphins every day, no matter the weather. This was difficult as Father Madelon wore a thick robe which, when waterlogged, became heavy, incredibly heavy, so damn heavy. Still, he swam with his dolphin friends. One day, while his disciples watched from a beach in Brittany in northern France, Father Madelon swam with a pair of juvenile dolphins. Although Father Madelon was an empath with humans – he was able to meet with married couples and tell them which of the two was a no-good cheating bastard – he was not similarly gifted with dolphins. Unknown to Father Madelon, the juvenile dolphins swimming with him on that fateful morning were, in fact, juvenile delinquents. Their named were Kaaaaa and Zeeeee. During the swim, Kaaaaa took the hem of Father Madelon's robe in his mouth and dove. Zeeeee, ever the faithful wingman, went along as they descended into the depths. Zeeeee reported to Kaaaaa the changes in Father's face as the human realized his plight and his face contorted from shock to panic to grimaces, to a face Zeeeee called 'stupid human open-mouthed gasp'. While Zeeeee reported the looks on Father Madelon's face with a series of chips, burps and whistles, Kaaaaa continued diving until the human stopped struggling.

When their play toy went limp, the dolphins decided to remove his silly robe and to their dismay, they spied the milky white body of a naked human, which repulsed them. They darted away to find their gang members to let them in on what they had done. 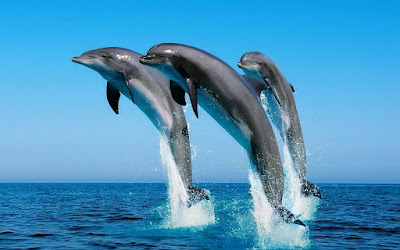 Gang of dolpins looking for trouble

Due to an unexplained fear of vampires, werewolves and flamingos, Father Madelon Pichon only ate garlic and onions during the last twenty years of his life. When his body was devoured by the orcas, the garlic-and-onion-permeated flesh began to roil and bubble in the belly of the orcas and both Sersereeee and Xorxoreeee beached themselves temporality and regurgitated the slimy, dismembered chucks of Father Madelon's body, including the right arm, on the beach and backed themselves into the water to hurriedly seek out a fat seal to rid their mouths of the foul taste of Father Madelon. 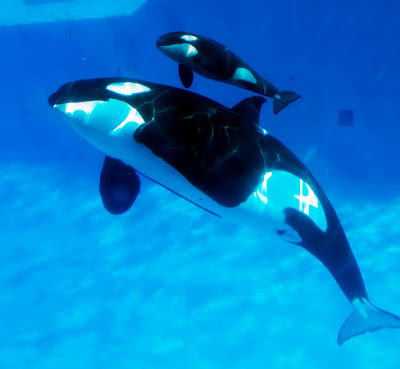 Mother orca and her calf

Madelon's disciples witnessed the vomiting of Father Madelon and rushed to the beach only to be driven away by the acidic stench of the remains. They rushed to town to spread the word that the most revered, beloved, honored priest had been eaten by killer whales and vomited on a beach. 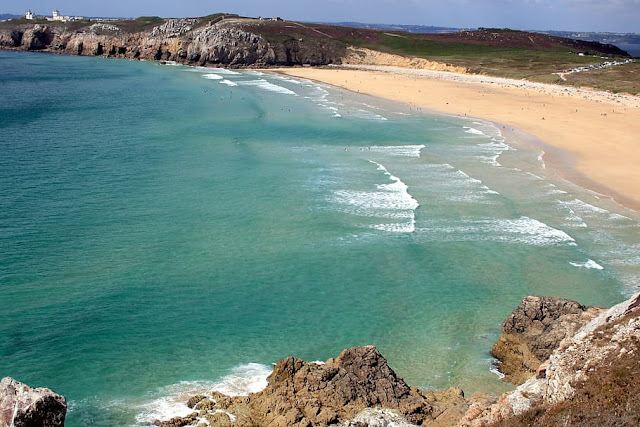 A different beach in Brittany, France

A miracle occurred that night as a cold front swept in with an ice-storm encasing the vomity beach in ice for three days. When the sun melted the ice, migratory birds, particularly snow geese, found the scent of Father Madelon's garlic-and-onion decomposing body so invigorating, they used the beach as a depository for their droppings as they migrated, which attracted water fowl by the thousands – albatrosses and swans who came to defecate on the beach, piling tons of bird doo-doo. New Zealand shelducks and North American buffleheads and various species of cormorants flocked to the beach to add their crap to the growing pile of excrement atop the remains of the revered priest.

The sensitive, Gallic noses of nearby Frenchmen could not stand the stench and the two nearby castles were deserted. The two castles remained unoccupied until the 20th Century when Nazi troops moved in and used one for billeting SS storm troopers and the other as a hospital for wounded Nazi soldiers. They renamed the castles – Castle Brunhilda's Stink and Castle Le Crappo. The Nazis found the smell from the nearby beach not unlike the scent of the fatherland. 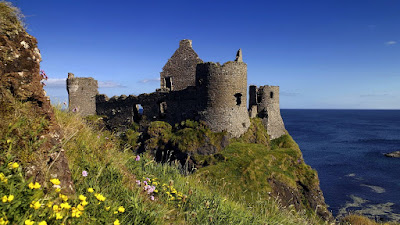 
Today, Father Madelon's Le Crappo Beach draws thousands of water fowl and other migratory birds who deposit their collective excrement, as well as scientists from around the world, who come between migratory seasons. The scientists wear yellow plastic suits with hoods and gas masks to collect bird droppings for analysis. Excited scientists, with dipping spoons in hand, can be observed slipping and sliding on the excrement as they shovel crap into plastic Tupperware. The braver scientists remove their masks to breath in the aroma in order to register the stench in their olfactory, analyzing the putrid scents much as a wine taster does before sipping a good Bordeaux. Eastern European excrement-tasters come during the hottest part of the year to they can taste the full range of flavors to log in little black notebooks.

Father Madelon Pichon's love of dolphins and his devouring by orcas, was a turning point in history as the day water mammals quit eating humans. The reverence given to his beach by Father Madelon's disciples drew the attention of the Vatican, which decided Father Madelon was indeed – a saint.
End of story.
Author's note


Medicare keeps sending me emails about the coronavirus and Covid-19 and scams criminals are using to steal the money sent to me by the government, as well as emails about how to manage stress during the lockdown. The above was my way of managing stress while in the middle of writing my latest novel.