by mystery guest
I'm very excited to have as my guest author today, J.A. Jance. She gave me permission to reprint this piece from her blog.   I'm not sure I've read all her books, but I've read most including her stand alone thrillers.

I first met Ms Jance at a Bouchercon in Scotsdale AZ. And  recently was able to spend a few steps with her in Dallas at the 50th Anniversary B'Con. If you've never read J.A. Jance, I suggest you rush right out and get several copies. You will enjoy the time you spend in AZ or in Seattle, Washington  I guarantee you.

She did a drive-by signing at Mysteries & More bookstore, that my late husband, Elmer and I owned in Austin from 1990 to 1999. At that signing, not advertised except to our customers, Ms Jance read from one of her books and opened my eyes to a new and better way to do this. She'd read a little bit, then she'd stop and talk about what she'd been thinking about for that scene or why her character acted in such a way. There were about 12 to 15 people there and at least two were writers and we learned a lesson in keeping people interested and not get into that boring  task of just reading your book. I hope you enjoy this article.
— Jan Grape

So yes, to my loyal paperback readers, The A List is finally coming out in a mass-market, pen-and-ink edition. I’m sure you think it’s high time, and it is. So today, I’d like to take this opportunity to give you a little background on not only the book but also on how that book in particular has intersected with my life.

In December, a little over a year ago, I was busy putting the final touches on the manuscript. In the story, we encounter Ali Reynolds as she is now, but also as she was while still a news anchor in LA and dealing with one of the biggest stories of her TV newscasting career.

Writing the manuscript hadn’t been easy. In July I developed a frozen shoulder, and in October my husband had back surgery. Initially he recovered well, but by mid-November, the recovery process had stalled out. He wasn’t eating properly. Nothing I cooked suited him, and he wasn’t at all himself. He was grumpy and not quite with it mentally. The only good thing about the situation was that, since he wasn’t eating, he was losing weight which he dutifully posted each morning on a weight-management app on his phone. On December 17, shortly after he posted his weight for the day, the app sent him a text: YOU ARE LOSING WEIGHT TOO FAST. CALL YOUR DOCTOR!

Bill is a retired electronics engineer. This was the computer speaking to him, and having the God in the Machine tell him to do something was a lot more effective than having someone else … namely his wife … tell him the same thing. He called his doctor and made an appointment for the following day. After an examination, the doctor ordered an ultrasound. As soon as he saw the results, the doctor said, “Go directly to the ER!” which we did. By the time we got there Bill, was suffering from acute kidney failure with his kidney function at 14%. Whoa! Had it not been for the app—had we waited one more day—I might well have lost him.

But I didn’t. It’s been a long slow process. He’s recovered enough that we’ll be going on a cruise the end of March. YAY. I love cruises. By now, you’re probably thinking, she’s really flipped her lid this time. Nice story, but what on earth does this have to do with The A List? 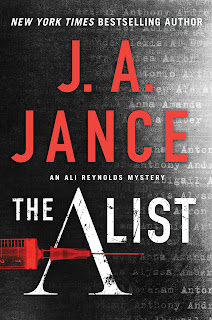 Between Christmas and New Years, days after we ended up in the ER, my editor sent me a second pass of the galleys for The A List. I had already done the first pass, but there had been so much chaos in our lives at the time that I thought they deserved a second go-down. In the book there’s a scene where a bereaved mother tells Ali about losing her daughter to kidney disease. In the process she relates the daughter’s symptoms shortly before she died of acute kidney failure. As I read through that passage, the hairs on the back of my neck stood on end. I had been describing a fictional character’s symptoms without recognizing that the very same real life symptoms were sitting beside me, right here in our family room!

So, if you’re a paperback reader, by all means, go out and pick up a copy of The A List. But thank you, too, for reading this combination newsletter/blog all the way through, because I want to get the word out. Kidney disease is dangerous and subtle. The symptoms sneak up on you, and sudden unexplained weight loss is one of them. I always thought that questions on physicals about sudden weight changes in the past six months was nothing but a sneaky way of finding out if people were sticking to their diets. Properly functioning kidneys sort out and dispose of all kinds of poisons that pass through the human body. When kidneys quit working, bad things happen. You lose mental acuity right along with losing your appetite. Your personality changes. And it’s not something where a physician can prescribe a medication and you’re suddenly good to go.

So, if you’re reading this through and if any of the above mentioned symptoms seem to fit what’s going on with you or with someone you love, CALL THE DOCTOR and ask to be tested for kidney function. This isn’t your wife or husband speaking—it’s the VOICE IN THE MACHINE, SO PAY ATTENTION!

Thus endeth the daily reading. As for coming attractions? I’m currently doing copy editing on Ali # 15, Credible Threat and working on the next Joanna Brady book, Missing and Endangered, due out this fall. So I’m still writing, and I’m incredibly grateful that so many of you are still reading.