A Different Kind of Movie


by John Floyd
One thing that hasn't gotten much coverage here at SleuthSayers lately is novels/stories/movies about the subject of writing. I found one of my long-ago columns at Criminal Brief that discusses that ("Stories About Stories"), and what I remember most about putting together that post was that I liked most of the novels and stories about writing, but I didn't like many of the movies. Some that I did enjoy were Adaptation, Misery, Miss Potter, The Man from Elysian Fields, Stranger than Fiction, and--more recently--Trumbo. I think there's plenty to be learned from all of these, including those that didn't appeal to me, but I finally decided that it's probably just hard to make a movie about writing that's entertaining. 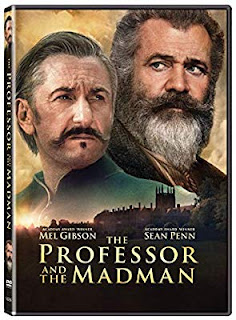 The other night, though, I watched a DVD I got via Netflix that I thoroughly enjoyed, called The Professor and the Madman (2019). Not a title that grabs you, right?--and not one that gives you any indication of the subject matter, either. But . . . it's an adaptation of the Simon Winchester book about the creation of the first edition of The Oxford English Dictionary, in the mid-1800s. It was enlightening, yes, but in a good way, and kept me entertained throughout. And yes, I realize it wasn't actually about writing--but it was certainly about publishing, and about words themselves. I even re-watched it with my wife later that night, and she enjoyed it also. (She likes maybe five percent of the movies I like--she not only ignores but rolls her eyes at all the rest.)

Quick overview: The professor in the title, James Murray (Mel Gibson), is the Scottish teacher who is assigned to compile the information for the dictionary; the madman, Dr. William Minor (Sean Penn), is the unlikely ally who, from his cell in Broadmoor Criminal Lunatic Asylum, assists Murray by sending him more than ten thousand entries. I thought the writer and director did a great job of showing what an almost-impossible undertaking this was.

Besides the main story--Murray's task of finding and defining every single word in the English language up to that point in time--there is an accompanying plot about redemption and friendship and forgiveness. At one point, that side-story brought a tear to my eye, something that usually happens only when I watch movies like Old Yeller, or Dumbo (the scene where Dumbo's mom is in the jail car and cradling him in her trunk through the bars, whoa, that gets me every time . . .). And it doesn't hurt that most of this movie was true.

Admittedly, The Professor and the Madman had a lot of things (besides its title) going against it. First, it received almost no promotion and had limited distribution. I just happened to notice it while browsing Netflix possibilities, and took a chance on it. Second, it is definitely slow-moving; not much action or excitement at all. Third, it has only two "name" stars: Gibson and Penn. The only other faces I recognized were those of British actor Eddie Marsan and Game of Thrones actress Natalie Dormer. Possibly because of all these things, I doubt if you've even heard of the movie, and if you have, I doubt you took the trouble to find and watch it. I almost didn't. But you should. 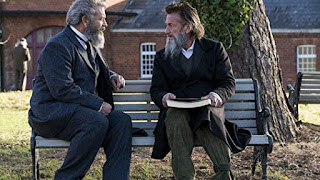 Having said all that, I will now take off my scholarly hat--it doesn't fit anyway--and go back to watching my cop movies and westerns, with an occasional space opera thrown in, and my wife'll go back to her sighs and eye-rolls. But in this case, I'm glad I took a break from my usual fare.

I suggest you give The Professor and the Madman a try. If you do, or if you've already seen it, tell me what you think.

And if you know of some interesting movies--OR novels/stories--about writing, please let me know in the comments. Writing is a fascinating subject, not just to us but to non-writers as well; there have to be other good ones out there.