Some of my favorite columns by my fellow SleuthSayers have been those that give us a sneak peek into the creation of the mystery stories they've published. I suppose it makes sense that I would like that kind of thing--I'm also a sucker for those little behind-the-scene "bonus" features included on most DVDs. I enjoy finding out where scenes were filmed and who else was considered for the roles and how the screenwriters got their ideas in the first place. Trivia galore.

So . . . what I thought I'd do today is talk about my short story in the January/February (current, at least for a couple more weeks) issue of Ellery Queen Mystery Magazine. It's called "Crow's Nest," and is a standalone tale about an old guy who gets involved by accident in a conflict between a bunch of local gangsters and a couple of amateur criminals. Bottom line is, it's about ordinary people caught up in extraordinary circumstances, which is, by the way, a pretty good definition of commercial fiction. 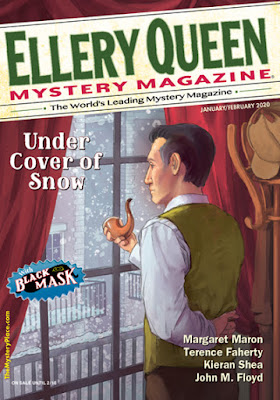 Quick setup: The "hero" of this story isn't a hero at all. Amos Garrett is a regular guy, a retired farmer who lives with his wife out in the boonies and doesn't have a lot of thrills in his life, which is just fine with him--until he stops his truck one day to help a young lady with a flat tire and no spare and a dead cellphone. Afterward, there's more than enough excitement to go around (or I hope there is). Robbery, murder, lies, betrayals, revenge, etc.

One of the things I wanted to do with this story was feature an older protagonist. Amos is pushing seventy-five--older than I am, but not by much--and so is his wife, and they live high on a hill in a house that's fairly ordinary except for one thing. It has a railed platform on top that allows an unobstructed view for miles around. They use it as sort of a patio, and call it their Crow's Nest, like the perches on the masts of tall ships where sailors watched for whales, or enemy vessels, or dry land. In this story, it comes in handy for something else.

Amos is an uncomplicated guy. He drives an ancient pickup, goes fishing and hunting now and then, owns an old fifty-caliber buffalo gun that he inherited but hasn't fired in years because the recoil hurts his shoulder, and still likes to go to cattle auctions even though he's long since sold all his cattle. He's also old-fashioned in his thinking: he loves his wife, he helps those in need, and he believes in trying to do the right thing.

The other protagonist (heroine?) is a woman named Wendy Lake ("Sounds like an apartment complex," she tells Amos, when they meet), and she IS complicated--sweet and meek at times and scary-tough at others. I won't say too much about her because she's the basis of most of the twists and turns the story takes--but I will say she's the exact opposite of Amos. He's old, she's young; he's local, she's an outsider; he's calm and cautious by nature; she's not; he lives pretty much by the rules; she doesn't. The POV alternates between these two for the entire story.

As has been discussed often at this blog, writers get their initial ideas from a lot of different places, and those starting points usually fall into three categories: settings, characters, or plots. I usually begin with the plot, partly because I think story is more important than anything else and partly because the plot just seems to be the first thing that pops into my head. Then and only then do I come up with characters who I hope are interesting and settings that I hope are convincing and appropriate. Lots of folks do it the other way around--characters first, or settings first. Different strokes. 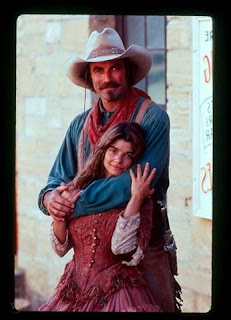 In the case of this story, my first glimmer of an idea came from a movie I watched years ago, an Australian "western" called Quigley Down Under. It won no Oscars and maybe didn't deserve any, but it was a riproaringly good story in terms of action and excitement. It had a great cast, a great plot, a great score, a great setting, and one scene in particular that stayed with me long afterward.

Picture this. American-in-a-strange-land Matthew Quigley, played by Tom Selleck, has been beaten senseless by the villain's men and carted off into the outback, to be left for dead. He and a young lady (Laura San Giacomo, if anyone remembers the TV series Just Shoot Me) are dumped unconscious from a buckboard in the middle of nowhere, and the two henchmen climb back into the wagon and prepare to leave. As Captain Kirk would say, the situation is grim.

Then Quigley comes to, lures one of the bad guys back down off the wagon, and--still lying down--kills him with a hidden knife. Thug #2, thankfully smarter than he looks, sees this and takes off in the wagon alone, headed away across the flats, but (also thankfully), Thug #1, now dead, was carrying Quigley's Sharps long-range rifle when he got stabbed, so our hero, trying to clear his head, wipes the blood and sweat and dirt from his eyes, loads the gun, crawls into position, props the three-foot-long barrel of the Sharps on the dead body of Thug #1, and takes careful aim. Meanwhile, Thug #2 is going hell for leather, flying across the desert, scared to death and leaning forward in his seat and looking back over his shoulder and whipping the horses as hard as he can and getting smaller and smaller and smaller in the distance. Knowing that he'll have only the one chance and knowing that if his bullet doesn't hit its tiny target Thug #2 will get home safely and report what happened and a small army will come back and kill him and his lovely still-unconscious companion, Quigley takes his time and squeezes off his shot and blows T#2 right out of his wagon seat, half a mile away. Heavy sighs of relief, fading music, end of scene. All is well.

So, using that as sort of a launch pad, I built a present-day plot whereby the young Wendy gets rescued from her car troubles by Amos Garrett, and he takes her home with him to call for roadside assistance. But of course the power is out at the house and so is the landline and she stays the night as the guest of Amos and his wife, and since Wendy says she and her brother are gun collectors Amos shows her his old .50-caliber Sharps--the one that buffalo hunters used in the Old West--and lets her have some target practice out back before supper. She's a surprisingly good shot. The next morning when phone lines are repaired she makes her call for assistance . . . but of course she isn't exactly who she claims to be (who is, in a mystery?) and she didn't call who she'd claimed she called, and the two people who come for her aren't car-repairmen and they definitely aren't friendly, to either her or the Garretts. A lot happens from that point, and part of it involves a long-range shot by Wendy with the buffalo gun, with time running out and everybody's lives hanging in the balance. (Sorry that preview ran so long.)

I should mention here that the scene I remembered from the movie resulted in less than one page of the twenty-one pages of my story manuscript--but it did serve as a starting point, the tiny match that lit the fire. It happens that way sometimes.

If pressured, I guess I would say there are several "themes" featured in this story--crime doesn't pay, lend a hand to the needy, the end can indeed sometimes justify the means, there are varying degrees of good and evil, love is more important than money, villains should get what they deserve, and so forth--but I admit I don't usually give much thought to illumination and life-lessons in fiction. I just try to tell an entertaining story, and if there's something to be learned form it, fine; if there's not, I might've at least saved you from half an hour of network TV, and believe me, that can be a blessing. I've never understood writing instructors who say you must come up with the theme first, before you start writing. My feeling is, don't waste time worrying about that. If you write a story and it turns out good, then it'll have a theme.

One more thing. One kind reader told me the other day, via email, that she liked my foreshadowing of a couple of things that happened near the end of this story--one of them involved an early view of several old mailboxes on the same post, something you see a lot in rural areas of the south, and which turned out to be meaningful later. I appreciated her noticing that, because I love doing that kind of thing in a story. Some of my writer friends seem to think foreshadowing is hard in short fiction because the stories aren't long enough for it to work. That's not true. It just depends on when and how you do it.

And that's all, folks. Thanks for indulging me. If you happen to read my story, I hope you'll like it. If you read it and don't like it, hey, maybe you'll have learned something not to do in your own stories.


See you in two weeks.