The Play's the Thing

Not long ago, I saw an audition call for a production of a play I performed in years ago, a mystery called Wait Until Dark. It's a rarity, a good mystery play that began as a play instead of being adapted from either a book or a film. There are several good mysteries on film, but most of them began as films or novels. My wife Barbara, who still acts in five or six plays a year and impersonates an 1890s British maid at the Mark Twain House, and I spent the rest of the evening trying to think of other good mystery plays that aren't adaptations.

It's a short list, and I don't like several of them for crochety reasons of my own. Obviously, many of Shakespeare's plays involve crime or mysteries: Hamlet, Othello, Macbeth, Lear, Caesar. I won't include them. Aeschylus gave us The Oresteia 2500 years ago, only a few years before Sophocles graced us with Oedipus The King, maybe the earliest detective story. I won't include those, either.

All those plays involve stage conventions we now consider "unrealistic" or "old-fashioned." The mystery form has conventions itself, and some of them are artificial, too. Red herrings, delaying a discovery, the impossible crime, and multiple suspects are pretty much standard procedure. Maybe that's why a script that leans heavily on staginess is effective for many of the plays I include below.

Investigating a mystery often involves moving from place to place, so a challenge in a mystery play is limiting scene/set changes that slow down the action. There are two ways to do this, one a staple of Shakespeare and the Greeks. That's the lack of a stage set at all. The audience has to imagine a different place for the action, often given the cue through dialogue ("What woods are these?"). The other is to construct a play that happens in one location. That's tough.

Barb and I have been involved in productions of most of these plays, which colors my judgment. 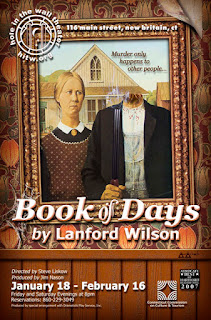 Book of Days by Lanford Wilson. Wilson passed away in 2011 after producing a body of work that equals Miller or Williams. He wrote roles for William Hurt, Christopher Reeve, Richard Thomas, Joan Allen, John Malkovich, and Judd Hirsch, among others. I directed this play about ten years ago, and Barb acted in it. In fact, I lost an actor less than a week before opening and had to step into his role myself.


If Raymond Chandler had written Our Town, the result might have been Book of Days. On a bare stage, 12 characters interact with each other and the audience to discuss how Walt, one of the small town's leading citizens, dies in a freak hunting accident. Apparently, a tree fell on him during a tornado and his shotgun went off. But there are inconsistencies, and by the play's end, the audience understands who killed Walt, how and why it was done, and that the killer will get away with it.
The play uses a bare stage but has over 90 scenes in 17 locations. We used light changes and a few basic props to keep the story going, just like the Greeks and Shakespeare.

Agnes of God by John Pielmeier uses the same black box strategy and for the same reasons. The artificiality is effective because we don't KNOW exactly what happened even though we understand the broad outlines. On a set consisting of two chairs and a standing ashtray, a female psychiatrist tells of being called in to evaluate the competence of a young nun. Agnes is accused of killing a newborn baby she claims she bore after an immaculate conception. If she is ruled rational, she faces a trial for murder. Otherwise, she will go to an insane asylum. The only other character is the Mother Superior who accuses the psychiatrist of bias against the Catholic Church. Barbara was learning the lines for Agnes as we went on our honeymoon.

I've seen two other productions, and all three had problems. It's hard to strike a balance between the characters and the story, but some scenes--a hypnotized Agnes reliving the agony of giving birth, for example--will keep you awake at night. She's clearly crazy, but does that automatically mean she's lying? 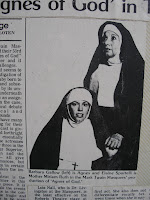 The less said about the film starring Jane Fonda, the better. Why anyone thought that stripping the play of its theatricality and trying to present literal reality on film is a bigger mystery than the play itself.

Equus by Peter Schaeffer also uses several locations with only the barest of furniture, and for the same reasons. Schaeffer passed away in 2016 at age 90 after writing many other acclaimed works, including Amadeus, which is also sort of a mystery.

The play gives us another psychiatrist treating a young patient, this time a teen-aged boy accused of blinding several horses in the stable where he worked. My wife played the boy's mother and a mutual friend played the psychiatrist (Shrinks are big in mystery drama: at least one of the plays I left off this list also has one). Actors wearing elaborate wire-frame heads play the horses. The nightmare moment of the play comes on a completely dark stage when all the horses' eyes light up, little red pilot lights across the back of the stage...and advance to surround the boy. Unlike Agnes, this play answers all our questions. Lucky us.

Wait Until Dark by Frederick Knott appeared on Broadway in 1966, and Lee Remick earned a Tony nomination as the blind woman who knows killers will break into her apartment that night. She smashes all the light bulbs in the apartment so she can fight them on equal terms. Robert Duvall played the ringleader in that production, and I wish I had seen the moment when he shows Susie the one light she forgot to smash: the bulb in the refrigerator (In theater parlance, we refer to this as the "Oh &$%# Moment").

The film version, a year or two later, drags badly. It allows us to see outside, too, which removes the claustrophobic feel of being trapped in the apartment. Alan Arkin, Richard Crenna and Jack Weston are excellent as the bad guys, but Audrey Hepburn's weepy and whiny blind girl is annoying. She's all wrong for the role. I played the Crenna role years ago, and now Jeffrey Hatcher has reworked the play and set it in the 1940s. The play has to be done in an older time period because a photographic dark room is vital, but I don't understand why someone felt it needed to be rewritten.

Death Trap by Ira Levin. Levin, who wrote many other works, including the novel that became the film Rosemary's Baby, saw this 1978 drama become the longest-running comedy-drama on Broadway. It was nominated for several Tony Awards, including Best Play. Another very stagy work, it involves two playwrights, a newcomer and a seasoned pro, who work together on a project that won't make it to the stage. The play-within-a-play structure works, and the script abounds with dark humor and theater in-jokes, including using a crossbow as a weapon. Done well, it's wonderful. Don badly, it's...well, deadly. I saw a local production with the same friend who played the psychiatrist in Equus as one lead and a former student as the other. The excellent film starred Michael Caine, Christopher Reeve, and Dyan Cannon. Hard to go wrong there.

That's it. If the plays don't work, the fault, dear Brutus is not in our star actors, but in ourselves.