When I was a teenager, the politicians in New Orleans wanted to put an expressway through the French Quarter to modernize the city's transportation system.

From 1964 through 1969, the elevated expressway was designated Interstate 310. The plan was to run it off Interstate 10, down Elysian Fields Avenue to run along the Mississippi Riverfront and connect with the Mississippi River Bridge. It would continue all the way to Earhart Boulevard to become the Earhart Expressway into Jefferson Parish. This elevated 6-lane expressway (40 feet high and 108 feet wide) would separate the Quarter from the river with the federal government paying 90% of the cost.

90%. The politicians salivated at all that money. These are the same guys who let the federal government cut down miles of beautiful, ancient live oak trees along Claiborne Avenue to build the elevated I-10 through the city.

Opposition gathered quickly by the Louisiana Landmarks Society and Vieux Carré Propery Owners Association. Unfortunately, local government was all behind this, from the governor to mayor of New Orleans to the city council. It was a 'go'. It would have killed the ambiance of the old French Quarter, overpowering it with noisy traffic and exhaust fumes. The preservationist worked hard to kill the project, even against pro-expressway local media (newspaper and TV). Preservationists worked the streets and the voice of opposition grew.

One man stopped everything… cold. US Secretary of the Transportation John Volpe shocked everyone by killing the project. He just said no. He invoked Section 106 of the National Historic Preservation Act, declaring the expressway would do irreversible damage to the historic French Quarter – which is what the preservationists argued.

In retrospect, some of the local politicians declared they had been wrong. Former mayor Moon Landrieu (father of recent mayor Mitch Landrieu and former US Senator Mary Landrieu), who was on the city council at the time, looked back and wondered what the hell he was thinking.

The stupidity was stopped by New Orleans preservationists and John Volpe. 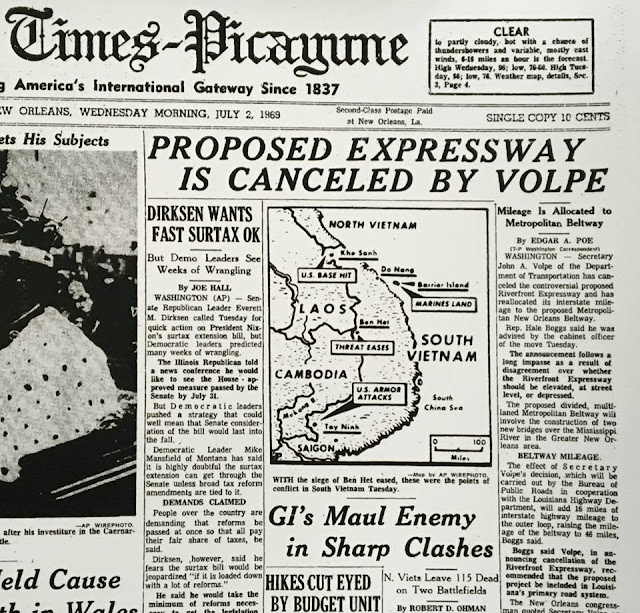