I love reading novels and watching movies--sometimes I wonder which I enjoy most. And what's really fun is reading a novel and then seeing the movie adaptation. Usually the book is better than the movie (The Hobbitt, Dune, Bonfire of the Vanities, The Stand), sometimes the movie's better than the book (The Godfather, Dances With Wolves, The Graduate, Forrest Gump), and occasionally--not often--they both turn out great (To Kill a Mockingbird, Lonesome Dove, Deliverance, The Green Mile, Mystic River, Eye of the Needle, Goldfinger, The Silence of the Lambs). I recently re-read a novel I'd discovered in high school, and then re-watched its movie adaptation, which I'd seen in college. The book is The Sands of Kalahari, and the movie (with a relocated "the") is Sands of the Kalahari. It's another of those rarities that, despite the title change, came across well on both the page and the screen.

I've always thought some of the best movies are adapted from novellas--The Shawshank Redemption (from Rita Hayworth and Shawshank Redemption), Apocalypse Now (from Heart of Darkness), Stand by Me (from The Body), and so on--because a novella's length tends to correspond more to a 90- to 120-minute film. Short stories have to be embellished, novels have to be condensed, but novellas are aa a good fit. That theory seems to hold true for Kalahari. Most sources refer to it as a novel, but it's a short one--my ratty old hardcover copy is only 192 pages. Probably because of that, the film version was able to stick pretty close to the book's storyline.

Quick facts: The novel The Sands of Kalahari was written by William Mulvihill and published in 1960; the movie Sands of the Kalahari, released in 1965, was directed by Cy Endfield and starred Stuart Whitman, Stanley Baker, and Susannah York. Trivia: Richard Burton and Elizabeth Taylor were originally scheduled for two of those leading roles.

Here's the basic plot. When a private aircraft crashes in the vast Kalahari Desert of southern Africa, the six survivors--five men and a woman--are left in a place where few humans have ever set foot. They finally stumble onto a barren valley of cliffs and caves and manage to locate enough food and water to keep them going. Their only companions in the valley are bands of curious and sometimes-savage baboons, and the six soon realize that no one's coming to rescue them. As the pilot of their ill-faeted plane sets off alone across the wasteland to try to find help and the other five hole up in a cave and try to keep from starving, one of them decides to improve his odds of survival by eliminating the rest of the men in the group. To say more would give away some great twists and revelations, so I'll stop there. 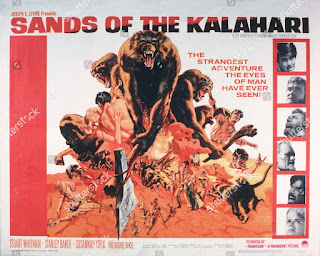 I can't help seeing some similarities to the TV series Lost, here. A diverse group of travelers find themselves stranded and on their own in an unfamiliar and dangerous place, and have to deal with (1) their harsh environment, (2) each other, (3) their own faults and fears and insecurities, and (4) the deadly beasts that live in and around their new home. Along with love and friendship and heroism there's plenty of danger, despair, lust, jealousy, betrayals, illness, violence, racism, etc., and--as we writers well know-- the more levels of conflict there are, the better the story.

This is a good one. I've now read the novel three times and seen the movie at least five or six times, and it never seems to get old.

The next time you have an urge for a wilderness survival tale, give one or both versions of this story a try. And if you do read it or see it, let me know what you think. Meanwhile, may all your flights be safe and your adventures baboon-free.

Keep up the good writing.