Read, — how there was a ghastly Trial once Of a dead man by a live man, and both, Popes

— Robert Burns, The Ring and the Book 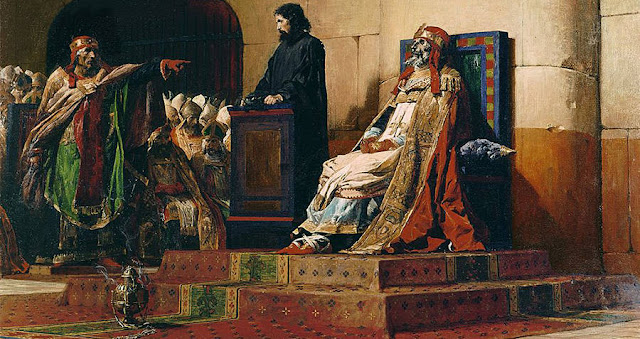 This week's foray into historical bastardry concerns the Papacy and a pope “convicted” of terrible crimes nearly a year after his death!

The late 9th and early 10th centuries marked a period of widespread political chaos in Italy dubbed the “Iron Age” of the Papacy. For example, no less than twenty-five men served as pope between the years 872 and 972. During this time the Papacy came to be viewed as the ultimate “plum job” by Rome’s wealthy families, many of whom vied with each other to see one of their number don the shoes of the fisherman and in turn dispense ridiculous amounts of patronage amongst his kinsmen. 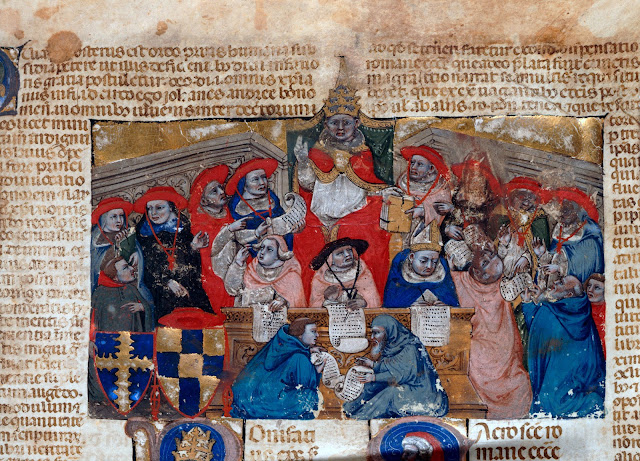 Feuds developed, blood was spilled. A pope was poisoned, and the reigns of his successors became successively shorter (many of them also meeting violent ends). In the midst of all of this chaos, where a pope would change canon law by this or that decree, only to have his reforms overturned by an antagonistic successor, one pope took matters even further.

He ordered a predecessor’s corpse dug up and put on trial.

Enter Pope Stephen VII, who reigned as pontiff from May of 896 to August of 897.

These days people (Catholic or not) tend to view the Pope, the head of the Roman Catholic Church as a benevolent, invariably elderly man dressed in clean white robes, apolitical, a living symbol of the Church’s stances on things such as social justice and mercy.

This was not always the case.

The Papacy has been around for millennia; it is one of the oldest institutions in the Christian Church. It stands to reason that a position like this one, which has been occupied by any number of different men over the course of its existence, has been occupied by the occasional loose screw. In the case of the Papacy, one could make the case that the law of averages has been stood on its head, and the office has seen enough loose screws, screaming rivets and outright nuts to fill a toolbox.

One such loose screw was Stephen VII, a churchman so off his rocker that he was given to toasting the health of the Devil and blaspheming against God. Add in the fact that Stephen was politically beholden to the family that ruled the nearby Duchy of Spoleto, and things start to get interesting.

During the Middle Ages the idea went that if a Pope was Christ’s vicar on Earth, he ought to have actual territory to rule like any secular feudal lord. This usually included the city of Rome and varying amounts of adjacent territory.

Since the Papacy at the time was scrambling for money and troops of its own, a succession of popes (including Stephen VII and many others) made outside alliances with powerful Italian families bent on adding the prestige of the Papacy to their own names. The Popes of this period usually accomplished this end by offering to legitimize the rule of the ally in question with a formal papal coronation (literally having the Pope himself place the ruler’s crown on his blessed head) in exchange for military aid and protection.

One pope who had done this was a predecessor of Stephen’s named Formosus, whose reign lasted five years (891-896). During that time Formosus (whose name in Latin means, “good looking”) had crowned the young Duke of Spoleto Holy Roman Emperor, then turned around and offered the same crown to Arnulf, King of Germany.


Arnulf had answered Formosus’ invitation by invading Italy and taking Rome, where Formosus promptly crowned him Holy Roman Emperor as well. Needless to say, this caused an uproar in Spoleto, especially with Angiltrude, Queen of Italy, Duchess of Spoleto, and erstwhile Holy Roman Empress, mother of the underaged Duke of Spoleto (who, lest we forget, had already been crowned Holy Roman Emperor himself). 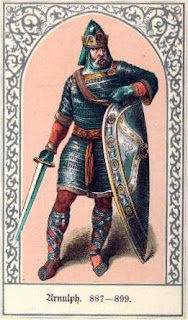 Struck by a sudden mysterious paralysis, Arnulf withdrew from Italy, leaving Formosus to pick up the pieces. Formosus responded by dying shortly afterward, to be initially succeeded by a couple of popes with ridiculously short reigns (one of them only lasted two weeks as pontiff!), and eventually by Stephen VII, the certifiably crazy political pawn of Spoleto’s ruling family.

About six months into his reign, Stephen had Formosus dug up and propped up in a chair in the Vatican, where he was then placed on trial (called, appropriately enough, the Synodus Horrenda in Medieval Church Latin, and known in English today as the far tamer "Cadaver Synod") with Pope Stephen himself sitting as judge. Formosus (or rather his corpse) was accused of (among other things) being ambitious enough to actually want to be pope (the nerve!).

No one is sure of Stephen’s reasons for putting on this, the ultimate show trial, but historians speculate that he was feeling pressure from Angiltrude and her supporters to delegitimize Formosus’ reign (thereby also wiping out Arnulf’s coronation as Holy Roman Emperor) and suffering from some well-documented psychosis.

The trial lasted for weeks, during which time Stephen would frequently interrupt his own papal prosecutor in order to rant at Formosus’ moldering corpse, calling it all manner of names, accusing it of murder, blasphemy and several other crimes with which it was not actually charged. How the corpse responded is not recorded.


The trial’s outcome was a foregone conclusion. The corpse was stripped of its expensive papal vestments, the first three fingers of its right hand (the three with which a pope blesses his subjects) were cut off, and the body was briefly reburied, this time in an unmarked grave in a graveyard reserved for foreigners. Within a couple of days it had been dug up yet again and tossed in to the Tiber River, only to be pulled out by a monk loyal to the dead pope’s memory.

This “Cadaver Synod” resulted in riots throughout Rome which eventually cost Stephen first his papal throne and eventually his life. He was strangled in prison less than six months after “condemning” the dead Formosus (once again, Formosus’ reaction, if any, to this news is not recorded).

A fitting end for one crazy bastard.
Posted by DoolinDalton at 01:00