A little about Private Eyes


by O'Neil De Noux
We all know there is no one-way to write, no one type of private eye, no rules – except to write clearly.

In the latest Reflections in a Private Eye newsletter of the Private Eye Writers of America, PWA President J. L. Abramo presents some wisdom from Raymond Chandler's The Simple Art of Murder.

A few snippets struck me. The world of the PI – "It is not a very fragrant world." True. Like police officers, private eyes often see humanity at its worst and "down these mean streets a man must go who is not himself mean, who is neither tarnished or afraid." Chandler explains, the private eye "must be a complete man and a common man and yet an unusual man."

Interesting. A lot to think about there.

Of dialogue, Chandler tells us, "He talks as a man of his age talks, that is, with rude wit, a lively sense of the grotesque, a disgust for sham, and a contempt for pettiness."

To Chandler – "The story is this man's adventure in search of a hidden truth, and it would be no adventure if it did not happen to a man fit for adventure."

Man or woman, I say. Not many female private eyes when Chandler was writing.

Chandler also says, "I do not care about his private life."

Here is where I differ from the master. I have two private eye series characters and their private lives are too important to be ignored.  In one, a lone wolf private eye who was a womanizer in the early short stories and first two novels in the series, changes overnight when an eight-year old girl with a small suitcase is left in front of his office. She is his daughter from a short liason he had before he went to war (WWII, of course). This lightning bolt transforms him. He has a little girl and this hard man is a single father now with a most precious mission. Raising his daughter.

In the subsequent books, his life with his little girl takes up many pages in the books as both characters lead me through the book. I follow behind recording what they do as the PI works his cases. 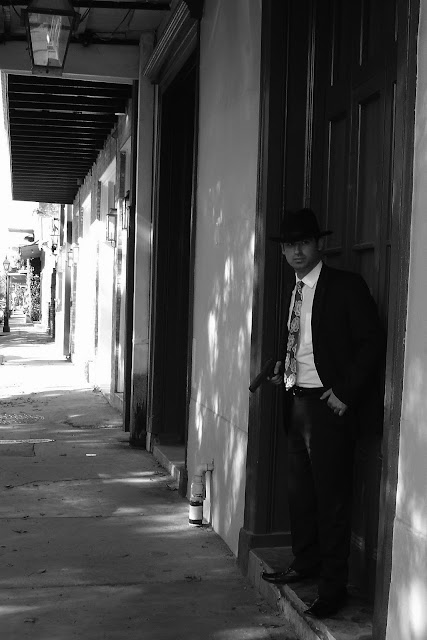 In my other PI series, the private eye is married to a wealthy woman and their personal life, along with their two rescued greyhounds, take an ever increasing role in the books. One of my previous agents suggested I kill off the wife to make the detective's life harder and sadder. I fired the agent instead. Most of the emails I get about this series talk about the wife's interactions with the PI.

Do I care how I've deviated from the formula? Not one bit. Ray Bradbury quotes Spanish poet and Nobel laureate Juan Ramon Jimenez at the beginning of Fahrenheit 451 and I agree – "If they give you ruled paper write the other way."

There is a lot more to the private eye than we have seen from any of us. I say go for it.