by Stephen Ross
A decade ago, I wrote a short story about an author who upgraded his computer for a model that could talk and think. QWERTY, the new computer, had a mind of its own. It changed its name to Oscar, offered unwanted advice on split infinitives, and began to write a screenplay (after networking with Peter Jackson's computer). And then it tried to steal the author's girlfriend. 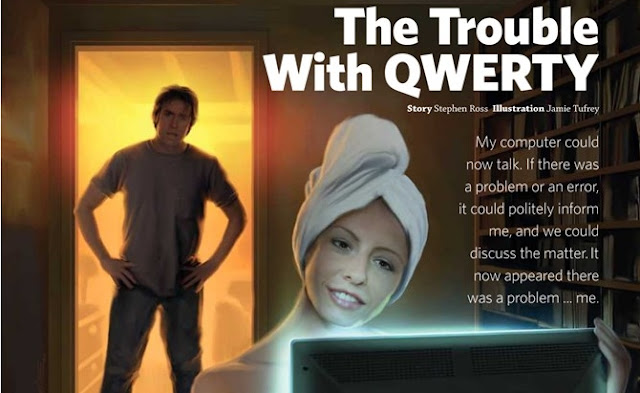 "I arrived home. I parked the car. I went inside and made my way to my office. As I climbed the stairs, I could hear voices. I could hear Oscar, and I could hear Ruby. Oscar was telling Ruby his Ernest Rutherford joke. When he got to the punch line, she cackled with laughter." The Trouble with QWERTY (COSMOS Magazine, Aug/Sep 2010)

The story was science fiction. It was a flight of (humorous) fantasy.

Consider this: The technology we have today wasn't around yesterday. My cheap cell phone (bought in January) has significantly more processing power and memory than my first Windows computer (bought in 1995); and that computer, a quarter of century ago, had more computing power and memory on board than the spaceship Neil Armstrong landed on the moon (a quarter of a century before that).

My computer, today, doesn't talk to me. But I can talk to it. Using voice recognition (Nuance's Dragon software, if you're curious), everything I say can be transcribed (almost perfectly) into text, and directly into an MS Word document. It's so easy, and workable, that I sometimes "write" first drafts of my stories this way.

Amazingly, scientists (in a study funded by Facebook) have already started taking steps to remove the "voice" part of speech recognition, transcribing directly from your brain waves.

They're working on this for the benefit of people who are paralyzed; remember the elaborate process by which Prof. Stephen Hawking communicated. It's an excellent field of study and development... and you just know (and this is not a negative) that once the software/equipment is up and running, market forces will see to it that it's available for everyone. One day, probably sooner than we'd imagine, we'll be able to "think" our stories into our computers.

But what really does worry me is, will there come a day when my computer doesn't need me to think for it, and it can write a story all by itself?

Yes, Virginia, there will come a day.

What do we writers do? We make stuff up. Well, there's an app for that. Actually, it's some pretty hardcore AI programming, but it can... actually... "make stuff up." I believe you can even download the code and try it out for yourself.

(Also) Article at The Guardian: New AI fake text generator may be too dangerous to release, say creators

OpenAI.com is a nonprofit research organ (funded by Elon Musk and others), and it has an AI text generator called GPT2. When fed text, anything from a few words to a whole page, it can write the next few sentences based on its predictions of what should follow. And this output text is coherent, fluid and natural. To most readers, it could have plausibly been written by a fellow human.

The OpenAI's software uses an input sample of content, e.g., 40 GB of internet text, and uses that dataset as a model to generate output. To quote The Guardian article:


"Feed it the opening line of George Orwell’s Nineteen Eighty-Four – “It was a bright cold day in April, and the clocks were striking thirteen” – and the system recognises the vaguely futuristic tone and the novelistic style, and continues with: “I was in my car on my way to a new job in Seattle. I put the gas in, put the key in, and then I let it run. I just imagined what the day would be like. A hundred years from now. In 2045, I was a teacher in some school in a poor part of rural China. I started with Chinese history and history of science.”

The internet is an awfully large, easily accessible (by man or machine) dataset. So imagine what might be possible if the program had more than 40 GB to play with? And frankly, 40 GB is nothing. My car radio has more memory. And it won't take long before the "opening sample" dataset isn't needed. I'm a Technical Writer by profession, but even I can write the code to randomly generate data, be it numbers or words. And how do we humans start a brand new story? With random ideas. 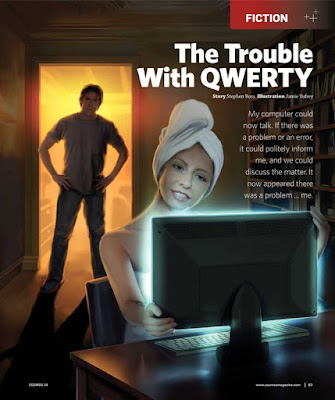 One of the key tasks the writer has when making up a story is bringing order to randomness. Writing fiction is a long, long series of decisions, mostly YES/NO decisions. They might start out a little more complex, but they will always eventually come down to the binary: Do I end the chapter here? Does she have dark hair? Does he know she cheated on him? Does she drink red wine? Does he drink white wine? It's 1s and 0s.

Could a machine/computer/robot/software/app one day write a short story, or a book, that passes muster with an editor (i.e., it's good) and it gets published? Yeah, I know, there's a wide    gulf between spitting out a paragraph or two of passable content, to the undertaking of the complexity of a 6,000 word short story, or an 80,000 word novel. But then, consider how much crap out there actually does get accepted and published.


Remember, it was a breathing, walking, talking human being who wrote "It was a dark and stormy night..."

There is, right now, an argument taking place about whether AI can, or should be recognized as the "creator" of something. From a BBC article:


"Unlike some machine-learning systems, Dabus has not been trained to solve particular problems.Instead, it seeks to devise and develop new ideas - "what is traditionally considered the mental part of the inventive act", according to creator Stephen Thaler."

Article at the BBC: AI system 'should be recognised as inventor'

So, why not? AI is simply a bunch of programming. In many respects, so are we. We write what we know. We write from our 'personal' datasets.

Welcome to our brave new world. And for the record, I really did write this article, I didn't outsource it to my toaster.

Bonus Trivia Item for Mystery Writers: "It was a dark and stormy night" is the start of the opening sentence of Lord Lytton's book Paul Clifford (published 1830). This is the only book that Raymond Chandler is known to have checked out of the library at Dulwich College, when he was a student there.